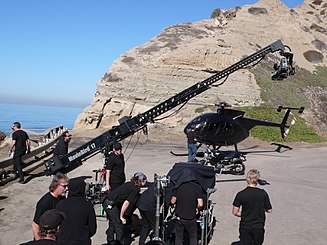 Technocrane is a telescopic camera crane widely utilised in the film industry and in television production worldwide today.

Today, TechnoCrane derivatives are available from several different manufacturers, SuperTechno, MovieBird, Scorpio among others, and come in many different sizes and various specifications, from 10 feet (3.0 m) to 75 feet (23 m) reach.

The camera is mounted on the remote head on the end of the crane and is remote controlled by a camera operator at a control desk. The Technocrane can telescope at variable speeds on demand. It allows camera moves that cannot be achieved using a jib arm crane and camera dolly, [2] and the telescoping can be used to compensate for the camera moving in an arc called "arc compensation". [3]

The first U.S. Patent #4943019 covering the Technocrane was granted to Gyula Mester/Technovision and filed in 1988 by the US Patent Office.

The Technocrane was first introduced to Hollywood in the late 1980s by one of the Technovision trained crane technicians, Simon Jayes.

In 1999, the Society of Camera Operators (S.O.C.) presented their technical achievement award to Technovision, Gyula Mester and Keith Edwards for the "First Telescopic Camera Crane" and for their significant contributions to the Art, Craft and Safety of the Camera Operator.

In 2005, at the 77th annual ceremony the Academy of Motion Picture Arts and Sciences presented Academy Awards to Horst Burbulla, Gyula Mester and Keith Edwards for the invention and development of the Technocrane. [4] [5] [6]

Productions that have used the Technocrane or the later SuperTechnocrane include Titanic, the Harry Potter films, the Lord of the Rings films, and all the James Bond films of the late 1990s and 2000s, among many others.