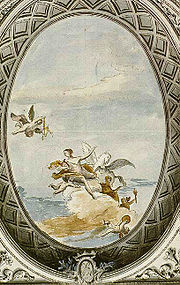 Watercolour depiction of a ceiling fresco in the Teatro San Moisè

The Teatro San Moisè was a theatre and opera house in Venice, active from 1620 to 1818. It was in a prominent location near the Palazzo Giustinian and the church of San Moisè at the entrance to the Grand Canal.

Built by the San Bernaba branch of the Giustiniani family c.1620, it was originally a prose theatre. Its first opera production was Claudio Monteverdi's (now lost) opera L'Arianna in 1640 by which time the ownership had passed to the Zane family who had long intermarried with the Giustiniani. It was used by the Ferrari company, and the librettist Giovanni Faustini was one of the theatre's first impresarios. [1] [2]

From the outset it was one of the smaller theatres of Venice, but also one of the most influential. In 1668 it was enlarged to 800 seats, although this did not result in a significant increase on the size of the stage which limited the theatre's ability to stage large-scale productions throughout its existence. In 1674 theatre was revived by the impresario Francesco Santurini, who caused a revolution by halving the price of tickets to 2 lire, leading to an opera 'boom' and a further proliferation of active theatres in the city. [3] [2]

During the early 18th century Gasparini, Vivaldi and Albinoni were all active in San Moisè. During the 1740s, Neapolitan opera buffa reached Venice and San Moisè was one of the first theatres to concentrate on this genre, with works by Baldassare Galuppi, in partnership with Carlo Goldoni, being seen in the theatre. This trend continued through most of the century. In the 1770s and 1780s the theatre was under the control of the prolific librettist Giovanni Bertati, the Poeta Cesareo ("Imperial Poet") of the Italian Opera in Vienna, who concentrated on drammi giocosi with Pasquale Anfossi and other composers. [4]

The San Moisè finally closed in 1818 after producing a series of farse by Rossini. It later re-opened as a puppet theatre and was known as the Teatro Minerva. In July 1896, the Minerva saw Venice's first cinema projection when the Lumière brothers brought their equipment to the theatre. It was still being used as a cinema in 1906 but was later demolished. By the end of the 20th century the site was occupied by a shop and a block of flats. [3] [5] [6]

Premieres at the theatre