From Wikipedia, the free encyclopedia
Level in a taxonomic hierarchy 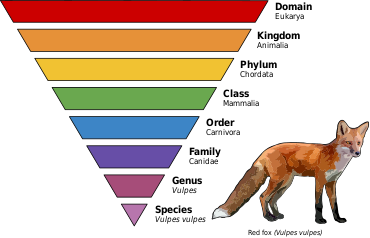 In biology, taxonomic rank is the relative level of a group of organisms (a taxon) in an ancestral or hereditary hierarchy. A common system of biological classification ( taxonomy) consists of species, genus, family, order, class, phylum, kingdom, domain. While older approaches to taxonomic classification were phenomenological, forming groups on the basis of similarities in appearance, organic structure and behaviour, methods based on genetic analysis have opened the road to cladistics.

A given rank subsumes under it less general categories, that is, more specific descriptions of life forms. Above it, each rank is classified within more general categories of organisms and groups of organisms related to each other through inheritance of traits or features from common ancestors. The rank of any species and the description of its genus is basic; which means that to identify a particular organism, it is usually not necessary to specify ranks other than these first two. [1]

Consider a particular species, the red fox, Vulpes vulpes: the specific name or specific epithet vulpes (small v) identifies a particular species in the genus Vulpes (capital V) which comprises all the "true" foxes. Their close relatives are all in the family Canidae, which includes dogs, wolves, jackals, and all foxes; the next higher major rank, the order Carnivora, includes caniforms (bears, seals, weasels, skunks, raccoons and all those mentioned above), and feliforms (cats, civets, hyenas, mongooses). Carnivorans are one group of the hairy, warm-blooded, nursing members of the class Mammalia, which are classified among animals with backbones in the phylum Chordata, and with them among all animals in the kingdom Animalia. Finally, at the highest rank all of these are grouped together with all other organisms possessing cell nuclei in the domain Eukarya.

In his landmark publications, such as the Systema Naturae, Carl Linnaeus used a ranking scale limited to kingdom, class, order, genus, species, and one rank below species. Today, the nomenclature is regulated by the nomenclature codes. There are seven main taxonomic ranks: kingdom, phylum or division, class, order, family, genus, and species. In addition, domain (proposed by Carl Woese) is now widely used as a fundamental rank, although it is not mentioned in any of the nomenclature codes, and is a synonym for dominion (lat. dominium), introduced by Moore in 1974. [3] [4]

A taxon is usually assigned a rank when it is given its formal name. The basic ranks are species and genus. When an organism is given a species name it is assigned to a genus, and the genus name is part of the species name.

The species name is also called a binomial, that is, a two-term name. For example, the zoological name for the human species is Homo sapiens. This is usually italicized in print or underlined when italics are not available. In this case, Homo is the generic name and it is capitalized; sapiens indicates the species and it is not capitalized.

The International Code of Zoological Nomenclature divides names into "family-group names", "genus-group names" and "species-group names". The Code explicitly mentions the following ranks for these categories:

The rules in the Code apply to the ranks of superfamily to subspecies, and only to some extent to those above the rank of superfamily. Among "genus-group names" and "species-group names" no further ranks are officially allowed. Zoologists sometimes use additional terms such as species group, species subgroup, species complex and superspecies for convenience as extra, but unofficial, ranks between the subgenus and species levels in taxa with many species, e.g. the genus Drosophila. (Note the potentially confusing use of "species group" as both a category of ranks as well as an unofficial rank itself.[ citation needed])

At higher ranks (family and above) a lower level may be denoted by adding the prefix "infra", meaning lower, to the rank. For example, infraorder (below suborder) or infrafamily (below subfamily).

According to Art 3.1 of the International Code of Nomenclature for algae, fungi, and plants (ICN) the most important ranks of taxa are: kingdom, division or phylum, class, order, family, genus, and species. According to Art 4.1 the secondary ranks of taxa are tribe, section, series, variety and form. There is an indeterminate number of ranks. The ICN explicitly mentions: [5]

There are definitions of the following taxonomic categories in the International Code of Nomenclature for Cultivated Plants: cultivar group, cultivar, grex.

The rules in the ICN apply primarily to the ranks of family and below, and only to some extent to those above the rank of family. Also see descriptive botanical name.

Hybrids can be specified either by a "hybrid formula" that specifies the parentage, or may be given a name. For hybrids receiving a hybrid name, the same ranks apply, prefixed with notho (Greek: 'bastard'), with nothogenus as the highest permitted rank. [7]

If a different term for the rank was used in an old publication, but the intention is clear, botanical nomenclature specifies certain substitutions:[ citation needed]

Classifications of five species follow: the fruit fly familiar in genetics laboratories (Drosophila melanogaster), humans (Homo sapiens), the peas used by Gregor Mendel in his discovery of genetics (Pisum sativum), the "fly agaric" mushroom Amanita muscaria, and the bacterium Escherichia coli. The eight major ranks are given in bold; a selection of minor ranks are given as well.

Taxa above the genus level are often given names based on the type genus, with a standard termination. The terminations used in forming these names depend on the kingdom (and sometimes the phylum and class) as set out in the table below.

Pronunciations given are the most Anglicized. More Latinate pronunciations are also common, particularly /ɑː/ rather than /eɪ/ for stressed a.

There is an indeterminate number of ranks, as a taxonomist may invent a new rank at will, at any time, if they feel this is necessary. In doing so, there are some restrictions, which will vary with the nomenclature code which applies.

The following is an artificial synthesis, solely for purposes of demonstration of relative rank (but see notes), from most general to most specific: [17]

Ranks are assigned based on subjective dissimilarity, and do not fully reflect the gradational nature of variation within nature. In most cases, higher taxonomic groupings arise further back in time: not because the rate of diversification was higher in the past, but because each subsequent diversification event results in an increase of diversity and thus increases the taxonomic rank assigned by present-day taxonomists. [22] Furthermore, some groups have many described species not because they are more diverse than other species, but because they are more easily sampled and studied than other groups.[ citation needed]

Of these many ranks, the most basic is species. However, this is not to say that a taxon at any other rank may not be sharply defined, or that any species is guaranteed to be sharply defined. It varies from case to case. Ideally, a taxon is intended to represent a clade, that is, the phylogeny of the organisms under discussion, but this is not a requirement.[ citation needed]

A classification in which all taxa have formal ranks cannot adequately reflect knowledge about phylogeny. Since taxon names are dependent on ranks in traditional Linnaean systems of classification, taxa without ranks cannot be given names. Alternative approaches, such as using circumscriptional names, avoid this problem. [23] [24] The theoretical difficulty with superimposing taxonomic ranks over evolutionary trees is manifested as the boundary paradox which may be illustrated by Darwinian evolutionary models.

There are no rules for how many species should make a genus, a family, or any other higher taxon (that is, a taxon in a category above the species level). [25] [26] It should be a natural group (that is, non-artificial, non- polyphyletic), as judged by a biologist, using all the information available to them. Equally ranked higher taxa in different phyla are not necessarily equivalent (e.g., it is incorrect to assume that families of insects are in some way evolutionarily comparable to families of mollusks). [26] For animals, at least the phylum rank is usually associated with a certain body plan, which is also, however, an arbitrary criterion.[ citation needed]

There are several acronyms intended to help memorise the taxonomic hierarchy, such as "King Phillip came over for great spaghetti". See taxonomy mnemonic. In Season 3, episode 16 ("Virtual Systems Analysis" ) of the NBC comedy Community the character Pierce Hawthorne ( Chevy Chase) refers to the mnemonic variant "Kevin, Please Come Over for Gay Sex."