Taos Pueblo (or Pueblo de Taos) is an ancient pueblo belonging to a Taos-speaking ( Tiwa) Native American tribe of Puebloan people. It lies about 1 mile (1.6 km) north of the modern city of Taos, New Mexico. The pueblos are considered to be one of the oldest continuously inhabited communities in the United States. [3] This has been designated a UNESCO World Heritage Site.

Taos Pueblo is a member of the Eight Northern Pueblos. Natives will almost never speak of their religious customs to outsiders, and, because their language has never been written down, much of the culture remains unknown to the rest of the world. A tribal land of 95,000 acres (38,000 ha) is attached to the pueblo, and about 4,500 people live in this area. [4]

The pueblo was constructed in a setting backed by the Taos Mountains of the Sangre de Cristo Range. The settlement was built on either side of Rio Pueblo de Taos, also called Rio Pueblo and Red Willow Creek, a small stream that flows through the middle of the pueblo compound. Its headwaters come from Blue Lake, or Ba Whyea, in the nearby mountains. [5]

Taos Pueblo's most prominent architectural feature is a multi-storied residential complex of reddish-brown adobe, built on either side of the Rio Pueblo. The Pueblo's website states it was probably built between 1000 and 1450. [4]

The pueblo was designated a National Historic Landmark on October 9, 1960. In 1992 it was designated as a UNESCO Heritage Site. As of 2010, [update] about 150 people live in the historical pueblo full-time. [6]

In the Tanoan language of Taos ( Northern Tiwa), the pueblo is referred to as "the village" in either tə̂otho "in the village" (tə̂o- "village" + -tho "in") or tə̂obo "to/toward the village" (tə̂o- "village" + -bo "to, toward"). The proper name of the pueblo is ȉałopháymųp’ȍhə́othə̀olbo "at red willow canyon mouth" (or ȉałopháybo "at the red willows" for short). [7] This name is more commonly used in ceremonial contexts and is less common in everyday speech.[ citation needed]

The name Taos in English was borrowed from Spanish Taos. Spanish Taos is probably a borrowing of Taos tə̂o- "village" which was heard as tao to which the plural -s was added although in the modern language Taos is no longer a plural noun. The idea that the Spanish Taos is from tao, "cross of the order of San Juan de los Caballeros" (from Greek tau), is unlikely. [8]

It is most likely that the Taos Indigenous people, along with other Pueblo Indigenous people, settled along the Rio Grande after migrating south from the Four Corners region. [6] The dwellings of that region were inhabited by the Ancestral Puebloans. A long drought in the area in the late 13th century may have caused them to move to the Rio Grande, where the water supply was more dependable. However, their reason for migrating is still disputed and there is evidence that a violent struggle took place. Ultimately, archeological clues point to the idea that the Natives may have been forced to leave.[ citation needed]

Throughout its early years, Taos Pueblo was a central point of trade between the native populations along the Rio Grande and their Plains Tribes neighbors to the northeast. Taos Pueblo hosted a trade fair each fall after the agricultural harvest. [9]

The first Spanish conquistadors ("conquerors") to Taos Pueblo arrived in 1540; they were members of the Francisco Vásquez de Coronado expedition, which stopped at many of New Mexico's pueblos in search of the rumored Seven Cities of Gold. Around 1620, Spanish Jesuits oversaw construction of the first Catholic Church in the pueblo, the mission of San Geronimo de Taos. [10] Reports from the period indicate that the native people of Taos resisted the building of the church and forceful imposition of the Catholic religion. [11] Throughout the 1600s, cultural tensions grew between the native populations of the Southwest and the increasing Spanish colonial presence. Taos Pueblo was no exception. By 1660, the native people killed the resident priest and destroyed the church. [12] The Spanish replied brutally. Several years after it was rebuilt, the Pueblo Revolt of 1680 began and once again the priest were killed and the church was burned a 2nd time. Several native tribes joined together to resist the Spaniards' ruthless and repeated attempts at removing the native culture and replacing it with the Catholic religion. [11] The aftermath of the 1680 revolt was the Spanish retreating from northern and central New Mexico to El Paso in the south and stayed there for about 12 years. 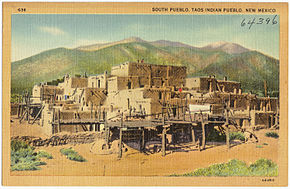 Residential adobe complex, and Taos Mountain pictured on an old postcard, circa 1930-1945.

The Pueblo's 48,000 acres (19,000 ha) of mountain land was taken by President Theodore Roosevelt and designated as the Carson National Forest early in the 20th century. It was finally returned in 1970 by the United States when President Nixon signed Public Law 91-550. [13] An additional 764 acres (309 ha) south of the ridge between Simpson Peak and Old Mike Peak and west of Blue Lake were transferred back to the Pueblo in 1996. [14]

Blue Lake, which the people of the Pueblo consider sacred, was included in this return of Taos land. The Pueblo notably involved non-native people in lobbying the federal government for the return of Blue Lake, as they argued that their unrestricted access to the lake and the surrounding region was necessary to ensure their religious freedom. [15] The Pueblo's web site names the reacquisition of the sacred Blue Lake as the most important event in its history due to the spiritual belief that the Taos people originated from the lake. [16] It is believed that their ancestors live there, [17] and the Pueblos themselves only ascend the mountain twice a year.[ citation needed] 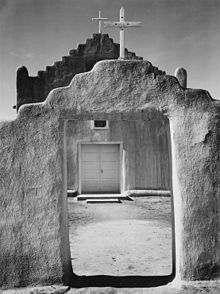 At the time of the Spaniards' initial contact, Hernando de Alvarado described the pueblo as having adobe houses built very close together and stacked five or six stories high. The homes became narrower as they rose, with the roofs of each level providing the floors and terraces for those above. [9]

The buildings at Taos originally had few windows and no standard doorways. Instead, access to rooms was through square holes in the roof that the people reached by climbing long, wooden ladders. Engelmann Spruce logs (or vigas) supported roofs that had layers of branches, grass, mud, and plaster covering them. The architecture and the building materials were well suited for the rigors of the environment and the needs of the people in the Taos Valley. [9] Prior to the arrival of Coronado, all Taos Pueblo walls were constructed using balls of adobe (clay) about four inches (10 cm) in diameter, Coronado introduced the technique of the formed mud brick, this technique revolutionized adobe construction in the new world. Coronado also changed the roof structure, to use 2 to 4 inch aspen saplings branches installed at a right angle to the Engelmann Spruce vigas, then 2 to 3 inches of adobe plaster was applied, topped off with up to half a meter of loose soil ( about 18 inches thick ) for insulation and structural strength. Thus indigenous architecture evolved.[ citation needed]

The first Spanish-influenced architecture appeared in Taos Pueblo after Fray Francisco de Zamora came there in 1598 to establish a mission, under orders from Spanish Governor, Don Juan de Oñate. [9]

The north-side Pueblo is said to be one of the most photographed and painted buildings in North America. [18] It is the largest multistoried Pueblo structure still existing. It is made of adobe walls that are often several feet thick. Its primary purpose was for defense. [6] Up to as late as 1900, access to the rooms on lower floors was by ladders on the outside to the roof, and then down an inside ladder. In case of an attack, outside ladders could easily be pulled up.

The homes in this structure usually consist of two rooms, one of which is for general living and sleeping, and the second of which is for cooking, eating, and storage. Each home is self-contained; there are no passageways between the houses. Taos Indians made little use of furniture in the past, but today they have tables, chairs, and beds. In the pueblo, electricity, running water, and indoor plumbing are prohibited. [6] 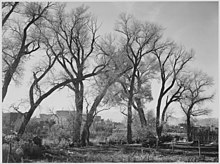 Two spiritual practices are represented in the Pueblo: the original indigenous spiritual and religious tradition [4] and Roman Catholicism. The majority of Taos Indians practice their still-vital, ancient indigenous religion. [6] Most (90%) members of the Taos Pueblo community are baptized as Roman Catholics. [4] Saint Jerome, or San Geronimo, is the patron saint of the pueblo. [19]

Since Spanish colonization, the native Taos people have resisted cultural change and influence with European ideas. [20] Many ethnographers observe a high level of "interconnectedness and mutual dependence" between the Taos Pueblo and their surrounding land, where they derive many of their cultural traditions. [20] Consequently, a historical rivalry exists between the people on the South side of the river (summer people) and the North side (winter people). Foot races, which have significant religious meaning in the tribe, are a common way for these two groups to express their rivalry, and there is a long held tradition in their tribe that was possibly created before the pyramids. [21] In addition, the Taos Pueblo attribute great value to Blue Lake in regards to their "living culture and agricultural sustainability." [22]

In the cultural fabric of the Taos Pueblo, the ethnographic data suggests that women are considered to be subordinate to men. The Pueblo social structure is dictated by kiva memberships, and women are not allowed to take part in the rituals held in these sacred spaces because they "are not trained" to do so. Despite the exclusion of women from some spiritual activities, the women in the Taos Pueblo society "exercised a considerable degree of influence economically, politically, and interpersonally." [23] For example, single women can run their own households, and married women control their own finances because they traditionally work as cooks or maids. Additionally, women have informal decision making power, using their abilities to influence the men around them. [23]

In 2011, the Taos Pueblo Preservation Program received a $800,000 grant from the U.S. Department of Housing and Urban Development. [24] The fund aims to hire more workers, especially those who are trained in traditional construction techniques for conservation work, as well as workshop assistants who help pueblo homeowners with maintenance of traditional adobe homes. Supervisors teach trainees about traditional construction methods while rebuilding the majority of an 11-unit house which was in a state of near-collapse. [25]

The first phase of the conservation of Taos Pueblo is the construction of the training center, restoration of 120–150 houses, training of the local people in the community, creation of a detailed assessment of the structure of the compound, and establishment of a cultural center and tribal archives. The second phase was financed by the World Monument Fund. It's listed on its watchlist because of its endangered nature, both culturally and structurally. By the end of the conservation efforts, twenty-one adobe houses are expected to be restored. The previous fund has also covered the cost of a laser scanning of the structures. [26]

The main characteristics of the conservation of Taos Pueblo aim to encourage a community-based approach. They include the training of local people to manage their own property, as well as the establishment of partnerships with government and non-government entities. The project resolves to preserve the traditional way of life in the community and sustain cultural traditions. [27]

In August of 2020, the United States Department of Housing and Urban Development announced a grant of $899,754 awarded to the Taos Pueblo Housing Authority to rehabilitate five housing units to help reduce the risk of transmitting COVID-19. The grant will also be used to provide rental, food, and utility assistance. [28]

This article incorporates  public domain material from websites or documents of the National Park Service.