Tana Toraja Regency ( Indonesian for Torajaland or Land of the Toraja, abbreviated Tator; Indonesian pronunciation:  [ˈtana toˈrad͡ʒa]) is a landlocked regency ( kabupaten) of South Sulawesi Province of Indonesia, and home to the Toraja ethnic group. It covers an area of 2,054.30 km2 (793.17 sq mi) and had a population of 221,081 at the 2010 census and 280,794 at the 2020 census. [3] The local government seat is in Makale, while the center of Toraja culture is in Rantepao. Formerly, the Tana Toraja area covered a larger area, but in 2008 this was divided into two regencies, consisting of Tana Toraja with its capital at Makale and Toraja Utara (North Toraja) with its capital at Rantepao.

The Tana Toraja boundary was determined by the Dutch East Indies government in 1909. In 1926, Tana Toraja was under the administration of Bugis state, Luwu. The regentschap (or regency) status was given on 8 October 1946, the last regency given by the Dutch. Since 1984, Tana Toraja has been named as the second tourist destination after Bali by the Ministry of Tourism, Indonesia. Since then, hundreds of thousands of foreign visitors have visited this regency. In addition, numerous Western anthropologists have come to Tana Toraja to study the indigenous culture and people of Toraja. 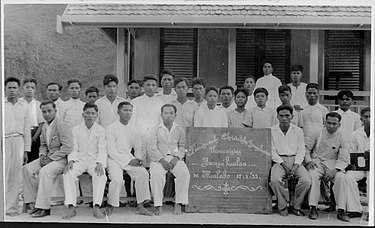 The government in Toraja has been started since the government Dutch East Indies. Based on the Emergency Law No. 3 of 1957, the District Level II Tana Toraja was formed which was inaugurated on 31 August 1957 with the first Regent of the Regional Head named Lakitta. [4]

Tana Toraja Regency in 2020 comprised nineteen administrative Districts (Kecamatan), tabulated below with their areas and their populations at the 2010 census [6] and the 2020 census. [3] The table also includes the administrative centre of the district, the numbers of administrative villages (kelurahan and desa) within that district, and its post code.

The original tribe that inhabits Tana Toraja is the Toraja tribe. The Toraja people are a tribe who live in the mountainous region of the northern part of the province of South Sulawesi, Indonesia. The population of the Toraja people is estimated at around 1 million people, and 500,000 of them are in Tana Toraja Regency, North Toraja Regency, and Mamasa Regency. Most of the Toraja people embrace Christianity, while some adhere to Islam and an animist belief known as Aluk Todolo. The Indonesian government has recognized this belief as part of the Hindu religion. [7]

The word Toraja itself comes from the Bugis language, namely "to riaja" which means "people who live in the land above". In 1909, the Dutch colonial government called this tribe the Toraja. The Toraja tribe is famous for its funeral rituals, Tongkonan traditional houses and also various types of wood carvings typical of Toraja. Toraja funeral rituals are important social events, usually attended by hundreds of people and lasting for several days. [7]

Before the 20th century, the Toraja tribe still lived in autonomous villages. They previously still adhered to animism, and had not been touched by the outside world. In the early 1900s, Dutch missionaries arrived and began to spread Christianity. Then, around the 1970s, Toraja people began to open up to the outside world, and Tana Toraja district (before it was expanded) became a symbol of Indonesian tourism. Then there was the development of Tana Toraja tourism, and it was studied by anthropology. So that in 1990-1s, the Toraja people underwent a cultural transformation, from a society with traditional and agrarian beliefs, to a society that was predominantly Christian, and the tourism sector in the Tana Toraja area continued to increase. [7] 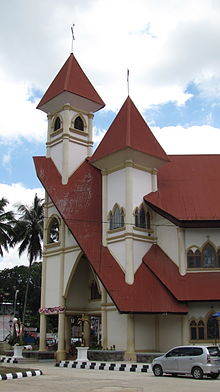 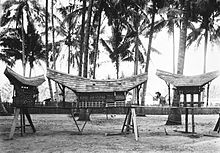 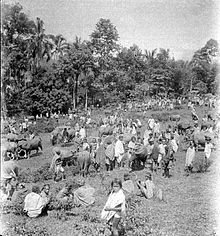 Celebrations in Toraja before 1939.

In 1974, Tongkonan Siguntu' dirara (traditional ceremony / Rambu Tuka') was attended by delegates from 60 foreign countries who attended the PATA conference in Jakarta in 1974. Since then Toraja has become known as a cultural tourism destination in Indonesia.

Tongkonan/house where Puang Sangalla' (king of Sangalla') lives. As the resting place of Puang Sangala' and also the palace where the government of the Sangalla' kingdom was managed at that time, Tongkonan Buntu Kalando had the title "tando tananan langi' lantangna Kaero tongkonan layuk". Currently Tongkonan Buntu Kalando is used as a museum to store prehistoric objects and relics of the Sangalla kingdom.

The graves of babies whose teeth have not yet grown (aged 6 months and under) are placed in a living tree that is hollowed out.

Tongkonan Pallawa is one of the tongkonan or traditional house that is very interesting and is located among the bamboo trees at the top of the hill. The tongkonan is decorated with a number of buffalo horns that are plugged in the front of the traditional house. Located about 12 km to the north of Rantepao. [10]

The place is often referred to as the home of the spirits. At the Lemo cemetery, we can see corpses kept in the open air, in the middle of steep rocks. This burial complex is a blend of death, art and ritual. At certain times the clothes of the corpses will be changed through the Ma' Nene ceremony. [10]

Tana Toraja is one of the conservation sites for the PROTO MELAYU AUSTRONESIAN cultural civilization which is still well-maintained today. Traditional culture, music, dance, oral literary arts, language, houses, carvings, weaving and culinary which are still very traditional, have made the Indonesian government strive for Tana Toraja to be known internationally, one of which is to nominate Tana Toraja to UNESCO for became a UNESCO World Heritage Site since 2009.

This is supported by Japan to make Tana Toraja a UNESCO World Heritage Site, Japan itself will participate in the conservation efforts, especially related to traditional houses in the area.

This support was conveyed in a meeting between the Indonesian and Japanese delegations in Poznan, Poland, Saturday 11 November 2010. September 10 in Poznan attended by representatives from about 40 countries in Asia and Europe.