Tōhoku retains a reputation as a remote, scenic region with a harsh climate. In the 20th century, tourism became a major industry in the Tōhoku region. 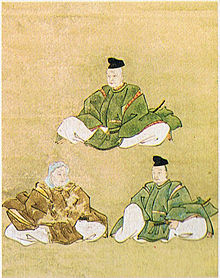 In mythological times, the area was known as Azuma (吾妻, あづま) and corresponded to the area of Honshu occupied by the native Emishi and Ainu. The area was historically the Dewa and the Michinoku regions, [2] a term first recorded in Hitachi-no-kuni Fudoki (常陸国風土記) (654). There is some variation in modern usage of the term "Michinoku". [3]

Tōhoku's initial historical settlement occurred between the seventh and ninth centuries, well after Japanese civilization and culture had become firmly established in central and southwestern Japan. The last stronghold of the indigenous Emishi on Honshu and the site of many battles, the region has maintained a degree of autonomy from Kyoto at various times throughout history.

The Northern Fujiwara (奥州藤原氏 Ōshū Fujiwara-shi) were a Japanese noble family that ruled the Tōhoku region during the 12th century as their own realm. They kept their independence vis-a-vis the Imperial Court in Kyoto by the strength of their warrior bands until they were overwhelmed by Minamoto no Yoritomo in 1189. [4]

Cast iron teapots like this one sit atop stoves during the long winters in Tōhoku.

Date Masamune (1567–1636), feudal lord of Date clan, expanded trade in the Tōhoku region. Although initially faced with attacks by hostile clans, he managed to overcome them after a few defeats and eventually ruled one of the largest fiefdoms of the later Tokugawa shogunate. He built many palaces and worked on many projects to beautify the region. He is also known to have encouraged foreigners to come to his land. Even though he funded and promoted an envoy to establish relations with the Pope in Rome, he was likely motivated at least in part by a desire for foreign technology, similar to that of other lords, such as Oda Nobunaga. He showed sympathy for Christian missionaries and traders in Japan. In addition to allowing them to come and preach in his province, he also released the prisoner and missionary Padre Sotelo from the hands of Tokugawa Ieyasu. Date Masamune allowed Sotelo as well as other missionaries to practice their religion and win converts in Tōhoku.

Further, once Tokugawa Ieyasu (1543–1616) outlawed Christianity, Masamune reversed his position, and though disliking it, let Ieyasu persecute Christians in his domain. For 270 years, Tōhoku remained a place of tourism, trade and prosperity. Matsushima, for instance, a series of tiny islands, was praised for its beauty and serenity by the wandering haiku poet Matsuo Bashō. 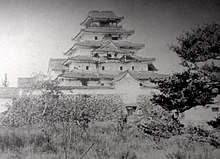 Aizuwakamatsu Castle after the Battle of Aizu, 1868 photograph.

The haiku poet Matsuo Bashō (1644–1694) wrote Oku no Hosomichi (The Narrow Road to the Deep North) during his travels through Tōhoku.

The catastrophic 9.0-Magnitude earthquake and tsunami on March 11, 2011, inflicted massive damage along the east coast of this region, caused 19,759 deaths, [6] and was the costliest natural disaster ever which left 500,000 people homeless along with radioactive emissions from the Fukushima Daiichi nuclear disaster.

The Tōhoku region and Hokkaido seen from space 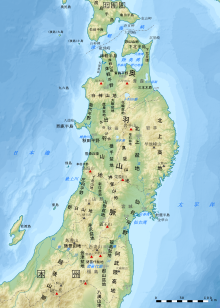 Tōhoku, like most of Japan, is hilly or mountainous, with the Ōu Mountains running north–south. The inland location of many of the region's lowlands has led to a concentration of much of the population there. Coupled with coastlines that do not favor seaport development, this settlement pattern resulted in a much greater than usual dependence on land and rail transportation. Low points in the central mountain range make communications between lowlands on either side of the range moderately easy.

Tōhoku was traditionally considered the granary of Japan because it supplied Sendai and the Tokyo- Yokohama market with rice and other farming commodities. Tōhoku provided 20 percent of the nation's rice crop.

The climate is colder than in other parts of Honshū due to the stronger effect of the Siberian High, and permits only one crop a year on paddy fields. The Pacific coast of Tohoku, however, is generally much less snowy than the region's popular image and has among the smallest seasonal temperature variation in Japan. The city of Iwaki, for instance, has daily mean temperatures ranging from 3.0 °C (37.4 °F) in January to 23.9 °C (75.0 °F) in August.

The population decline of Tōhoku, which began before the year 2000, has accelerated, now including previously dynamic Miyagi. Despite this, Sendai City has grown, in part due to relocations of people affected by the 2011 disaster. The population decline of Aomori, Iwate and Akita Prefectures, Honshu's three northernmost, began in the early 1980s after an initial loss of population in the late 1950s. Fukushima Prefecture, prior to 1980, had traditionally been the most populated, but today Miyagi is the most populated and urban by far.