Svante Pääbo ForMemRS (Swedish:  [ˈsvânːtɛ̂ ˈpʰɛ̌ːbʊ̂]; [3] born 20 April 1955) is a Swedish geneticist and Nobel Laureate who specialises in the field of evolutionary genetics. [4] As one of the founders of paleogenetics, he has worked extensively on the Neanderthal genome. [5] [6] In 1997, he became founding director of the Department of Genetics at the Max Planck Institute for Evolutionary Anthropology in Leipzig, Germany. [7] [8] [9] Since 1999, he has been an honorary professor at Leipzig University; he currently teaches molecular evolutionary biology at the university. [10] [11] He is also an adjunct professor at Okinawa Institute of Science and Technology, Japan. [12]

In 2022, he was awarded the Nobel Prize in Physiology or Medicine "for his discoveries concerning the genomes of extinct hominins and human evolution". [13] [14] [15]

Pääbo grew up as a native Swedish speaker. [22] In a 2012 interview with the Estonian newspaper Eesti Päevaleht, he said that he self-identifies as a Swede, but has a "special relationship with Estonia". [23]

In 1975, Pääbo began studying at Uppsala University, serving one year in the Swedish Defense Forces attached to the School of Interpreters. Pääbo earned his Ph.D. from Uppsala University in 1986 for research investigating how the E19 protein of adenoviruses modulates the immune system. [24] 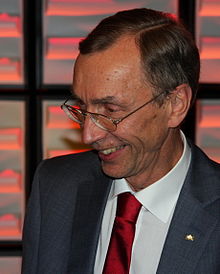 Pääbo at the 2014 Nobel Conference

Pääbo is known as one of the founders of paleogenetics, a discipline that uses genetics to study early humans and other ancient species. [25] [26]

From 1986 to 1987, he did postdoctoral research at the Institute for Molecular Biology II, University of Zurich, Switzerland. [27]

As an EMBO Postdoctoral Fellow, Pääbo moved to the United States in 1987, accepting a position as a postdoctoral researcher in biochemistry at the University of California, Berkeley, where he joined Allan Wilson's lab and worked on the genome of extinct mammals. [27] [28]

In 1990, he returned to Europe to become professor of general biology at the University of Munich, and, in 1997, he became founding director of the Max Planck Institute for Evolutionary Anthropology in Leipzig, Germany. [28]

In 1997, Pääbo and colleagues reported their successful sequencing of Neanderthal mitochondrial DNA ( mtDNA), originating from a specimen found in Feldhofer grotto in the Neander valley. [29] [30]

In August 2002, Pääbo's department published findings about the "language gene", FOXP2, which is mutated in some individuals with language disabilities. [31]

In 2006, Pääbo announced a plan to reconstruct the entire genome of Neanderthals. In 2007, he was named one of Time magazine's 100 most influential people of the year. [32]

In February 2009, at the Annual Meeting of the American Association for the Advancement of Science (AAAS) in Chicago, it was announced that the Max Planck Institute for Evolutionary Anthropology had completed the first draft version of the Neanderthal genome. [33] Over 3 billion base pairs were sequenced in collaboration with the 454 Life Sciences Corporation. [34]

In March 2010, Pääbo and his coworkers published a report about the DNA analysis of a finger bone found in the Denisova Cave in Siberia; the results suggest that the bone belonged to an extinct member of the genus Homo that had not yet been recognised, the Denisova hominin. [35] Pääbo first wanted to classify the Denisovans as a species of their own, separate from modern humans and Neanderthals but changed his mind after peer-review. [36] [37]

In May 2010, Pääbo and his colleagues published a draft sequence of the Neanderthal genome in the journal Science. [40] He and his team also concluded that there was probably interbreeding between Neanderthals and Eurasian (but not Sub-Saharan African) humans. [41] There is general mainstream support in the scientific community for this theory of interbreeding between archaic and modern humans. [42] This admixture of modern human and Neanderthal genes is estimated to have occurred roughly between 50,000 and 60,000 years ago, in the Middle East. [43]

In 2014, he published the book Neanderthal Man: In Search of Lost Genomes where he, in the mixed form of a memoir and popular science, tells the story of the research effort to map the Neanderthal genome combined with his thoughts on human evolution. [20] [44]

In 2020, Pääbo determined that more severe impacts upon victims of the COVID-19 disease, including the vulnerability to it and the incidence of the necessity of hospitalisation, have been associated via DNA analysis to be expressed in genetic variants at chromosomal region 3, features that are associated with European Neanderthal heritage. That structure imposes greater risks that those affected will develop a more severe form of the disease. [45] The findings are from Pääbo and researchers he leads at the Planck Institute and the Karolinska Institutet. [45]

In 1992, he received the Gottfried Wilhelm Leibniz Prize of the Deutsche Forschungsgemeinschaft, which is the highest honour awarded in German research. Pääbo was elected a member of the Royal Swedish Academy of Sciences in 2000, and in 2004 was elected an international member of the National Academy of Sciences. [47] In 2005, he received the prestigious Louis-Jeantet Prize for Medicine. [1] In 2008, Pääbo was added to the members of the Order Pour le Mérite for Sciences and Arts. In the same year, he received the Golden Plate Award of the American Academy of Achievement. [48] In October 2009, the Foundation For the Future announced that Pääbo had been awarded the 2009 Kistler Prize for his work isolating and sequencing ancient DNA, beginning in 1984 with a 2,400-year-old mummy. [49] In June 2010, the Federation of European Biochemical Societies (FEBS) awarded him the Theodor Bücher Medal for outstanding achievements in Biochemistry and Molecular Biology. [50] In 2013, he received Gruber Prize in Genetics for groundbreaking research in evolutionary genetics. [51] In June 2015, he was awarded the degree of DSc (honoris causa) at NUI Galway. [52] He was elected a Foreign Member of the Royal Society in 2016, [2] and in 2017, was awarded the Dan David Prize. In 2018, he received the Princess of Asturias Awards in the category of Scientific Research, in 2020 the Japan Prize, [53] in 2021 the Massry Prize [54] and in 2022 the Nobel Prize in Physiology or Medicine [55] for sequencing the first Neanderthal genome. [14]

Pääbo wrote in his 2014 book Neanderthal Man: In Search of Lost Genomes that he is bisexual. He assumed he was gay until he met Linda Vigilant, an American primatologist and geneticist whose "boyish charms" attracted him. They have co-authored many papers, are married and raising a son and a daughter together in Leipzig. [56] [6]