From Wikipedia, the free encyclopedia
Style of reaction between magma and seawater 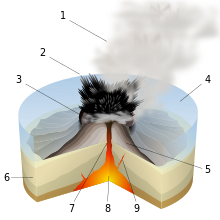 A Surtseyan eruption is an explosive style of volcanic eruption that takes place in shallow seas or lakes when rapidly rising and fragmenting hot magma interacts explosively with water and with water-steam- tephra slurries. The eruption style is named after an eruption off the southern coast of Iceland in 1963 that caused the emergence of a new volcanic island, Surtsey. [1]

Surtseyan eruptions are hydromagmatic eruptions, in that they are violently explosive as a result of vigorous interaction between rising magma and lake or sea water. The magma is commonly basaltic and fragments into small pyroclasts (known as ' ash' and ' lapilli'), and these accumulate around the crater to form a small cone or ring-shaped heap. Volcanoes of this type are known as ' tuff cones' and ' tuff rings' because the volcanic ash of which they are made soon solidifies by chemical reaction into a hard rock known as ' tuff'.

Surtseyan eruptions are characteristically unsteady, with phases of rapid repeated short, violent explosions separated by more quiescent phases dominated by steam generation and condensation. Ash and lapilli are emplaced by ash fall (frequently moist or wet), and by short-duration, pyroclastic density currents. The resultant deposits are characteristically well bedded with abundant evidence for moist conditions (e.g. ash aggregates, vesiculated ash layers, and soft-state deformed layers). Much of the wet tephra repeatedly slumps back down into the volcano's crater to be re-ejected by further watery explosions. 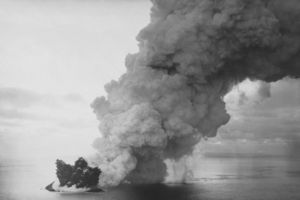 Surtsey is the most famous example of a Surtseyan eruption.

Although similar in nature to phreatomagmatic eruptions, there are several specific characteristics: [2]