From Wikipedia
https://en.wikipedia.org/wiki/Surface_of_revolution
Surface created by rotating a curve about an axis 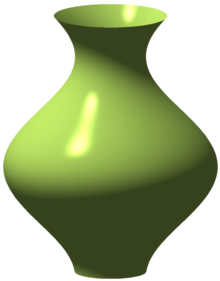 A surface of revolution is a surface in Euclidean space created by rotating a curve (the generatrix) around an axis of rotation. [1]

Examples of surfaces of revolution generated by a straight line are cylindrical and conical surfaces depending on whether or not the line is parallel to the axis. A circle that is rotated around any diameter generates a sphere of which it is then a great circle, and if the circle is rotated around an axis that does not intersect the interior of a circle, then it generates a torus which does not intersect itself (a ring torus).

The sections of the surface of revolution made by planes through the axis are called meridional sections. Any meridional section can be considered to be the generatrix in the plane determined by it and the axis. [2]

The sections of the surface of revolution made by planes that are perpendicular to the axis are circles.

Some special cases of hyperboloids (of either one or two sheets) and elliptic paraboloids are surfaces of revolution. These may be identified as those quadratic surfaces all of whose cross sections perpendicular to the axis are circular.

If the curve is described by the parametric functions x(t), y(t), with t ranging over some interval [a,b], and the axis of revolution is the y-axis, then the area Ay is given by the integral

provided that x(t) is never negative between the endpoints a and b. This formula is the calculus equivalent of Pappus's centroid theorem. [3] The quantity

comes from the Pythagorean theorem and represents a small segment of the arc of the curve, as in the arc length formula. The quantity 2πx(t) is the path of (the centroid of) this small segment, as required by Pappus' theorem.

Likewise, when the axis of rotation is the x-axis and provided that y(t) is never negative, the area is given by [4]

If the continuous curve is described by the function y = f(x), a ≤ x ≤ b, then the integral becomes

for revolution around the x-axis, and

for revolution around the y-axis (provided a ≥ 0). These come from the above formula. [5]

For example, the spherical surface with unit radius is generated by the curve y(t) = sin(t), x(t) = cos(t), when t ranges over [0,π]. Its area is therefore

For the case of the spherical curve with radius r, y(x) = √r2 − x2 rotated about the x-axis

A surface of revolution given by rotating a curve described by

around the x-axis may be most simply described by

. If instead we revolve the curve around the y-axis, then the curve is described by

If x and y are defined in terms of a parameter

, then the surface of revolution obtained by revolving the curve around the x-axis is described by

, and the surface of revolution obtained by revolving the curve around the y-axis is described by

Meridians are always geodesics on a surface of revolution. Other geodesics are governed by Clairaut's relation. [8]

A toroid generated from a square

A surface of revolution with a hole in, where the axis of revolution does not intersect the surface, is called a toroid. [9] For example, when a rectangle is rotated around an axis parallel to one of its edges, then a hollow square-section ring is produced. If the revolved figure is a circle, then the object is called a torus.

The use of surfaces of revolution is essential in many fields in physics and engineering. When certain objects are designed digitally, revolutions like these can be used to determine surface area without the use of measuring the length and radius of the object being designed.