From Wikipedia, the free encyclopedia
Underwater vents or fissures in the Earth's surface from which magma can erupt
Not to be confused with Subaqueous volcano, a volcano formed beneath freshwater that never builds above lake level.
For mountains rising from the ocean seafloor, see Seamount. For related geological features, see Mid-ocean ridge and Hotspot (geology). 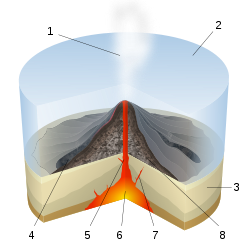 Scheme of a submarine eruption. 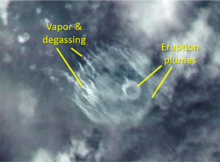 Circular plumes from a submarine eruption near Tonga

Effect of water on volcanoes

The presence of water can greatly alter the characteristics of a volcanic eruption and the explosions of underwater volcanoes in comparison to those on land.

For instance, water causes magma to cool and solidify much more quickly than in a terrestrial eruption, often turning it into volcanic glass. The shapes and textures of lava formed by submarine volcanoes are different from lava erupted on land. Upon contact with water, a solid crust forms around the lava. Advancing lava flows into this crust, forming what is known as pillow lava.

Below ocean depths of about 2200 m, where the pressure exceeds the critical pressure of water (22.06 MPa or about 218 atmospheres for pure water), it can no longer boil; it becomes a supercritical fluid. Without boiling sounds, deep-sea volcanoes can be difficult to detect at great distances using hydrophones.[ citation needed]

The critical temperature and pressure increase in solutions of salts, which are normally present in the seawater. The composition of aqueous solution in the vicinity of hot basalt, and circulating within the conduits of hot rocks, is expected to differ from that of bulk water (i.e., of sea water away from the hot surfaces). One estimation is that the critical point is 407 °C and 29.9 MPa, while the solution composition corresponds to that of approximately 3.2% of NaCl. [4]

Scientists still have much to learn about the location and activity of underwater volcanoes. In the first two decades of this century, NOAA's Office of Ocean Exploration has funded exploration of submarine volcanoes, with the Ring of Fire missions to the Mariana Arc in the Pacific Ocean being particularly noteworthy. Using Remote Operated Vehicles (ROV), scientists studied underwater eruptions, ponds of molten sulfur, black smoker chimneys and even marine life adapted to this deep, hot environment.

Research from the ROV KAIKO off the coast of Hawaii has suggested that pahoehoe lava flows occur underwater, and the degree of the submarine terrain slope and rate of lava supply determine the shape of the resulting lobes. [5]

In August 2019, news media reported a large pumice raft floating in the South Pacific between Fiji and Tonga. [6] Subsequent scientific investigations revealed the pumice raft originated from the eruption of a nearby submarine volcano, which was directly observed as a volcanic plume in satellite images. [7] This discovery will help scientists better predict for the precursors of a submarine eruption, such as low-frequency earthquakes or hydrophone data, using machine learning. [7]

Many submarine volcanoes are seamounts, typically extinct volcanoes that rise abruptly from a seafloor of 1,000 - 4,000 meters depth. They are defined by oceanographers as independent features that rise to at least 1,000 meters above the seafloor. The peaks are often found hundreds to thousands of meters below the surface, and are therefore considered to be within the deep sea. [8] An estimated 30,000 seamounts occur across the globe, with only a few having been studied.[ citation needed] However, some seamounts are also unusual. For example, while the summits of seamounts are normally hundreds of meters below sea level, the Bowie Seamount in Canada's Pacific waters rises from a depth of about 3,000 meters to within 24 meters of the sea surface.[ citation needed]

Identifying types of eruptions by sounds 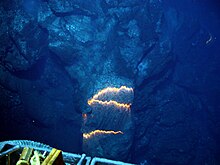 There are two types of sound generated by submarine eruptions: One created by the slow release and bursting of large lava bubbles, while quick explosions of gas bubbles create the other one. Using this method to be able to distinguish the two can help measure the related affects on marine animals and ecosystems, the volume and composition of the lava flow can also be estimated and built into a model to extrapolate potential effects.

Scientists have connected sounds to sights in both types of eruptions. In 2009, a video camera and a hydrophone were floating 1,200 meters below sea level in the Pacific Ocean near Samoa, watching and listening as the West Mata Volcano erupted in several ways. Putting video and audio together let researchers learn the sounds made by slow lava bursting and the different noises made by hundreds of gas bubbles. [10] [11]