From Wikipedia
https://en.wikipedia.org/wiki/Subfossil
Bone or other part of an organism that has not fully fossilized 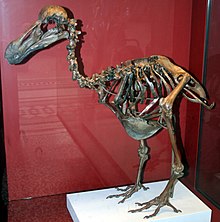 A subfossil is a part of a dead organism that is partially, rather than fully, fossilized, as is a fossil. Partial fossilization may be present because not enough time has elapsed since the animal died for full fossilization, or because the conditions in which the remains were deposited were not optimal for fossilization.

Unfossilized or partially fossilized remains can include bones, exoskeletons, nests, skin imprints, or fecal deposits. Subfossils of vertebrates are often found in caves or other shelters, where the remains have been preserved for thousands of years. [1] Subfossils are also often found in depositionary environments, such as lake sediments, oceanic sediments, and soils. Once deposited, physical and chemical weathering may alter the state of preservation, and small subfossils can also be ingested by living organisms. Subfossil remains that date from the Mesozoic are exceptionally rare, are usually in an advanced state of decay, and are consequently much disputed. [2] The vast bulk of subfossil material comes from Quaternary sediments, including many subfossilized chironomid head capsules, ostracod carapaces, diatoms, and foraminifera.

Special application of the term to mollusc shells

For remains such as molluscan seashells, which frequently do not change their chemical composition over geological time, and may occasionally even retain such features as the original color markings for millions of years, the label 'subfossil' is applied to shells that are understood to be thousands of years old, but are of Holocene age, and therefore are not old enough to be from the Pleistocene epoch.[ citation needed]

The main importance of these vertebrate subfossil (versus fully fossilized) remains is that they contain organic material, which can be used for radiocarbon dating or the extraction and sequencing of DNA, protein or other biomolecules. Additionally, isotope ratios can provide information about the ecological conditions under which extinct animals lived. Subfossils are useful for studying the evolutionary history of an environment and can be important to studies in paleoclimatology.