From Wikipedia
https://en.wikipedia.org/wiki/Stratovolcano
Type of conical volcano composed of layers of lava and tephra 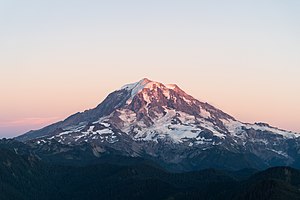 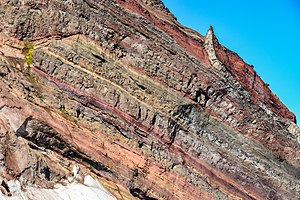 A stratovolcano, also known as a composite volcano, is a conical volcano built up by many layers (strata) of hardened lava and tephra. [1] Unlike shield volcanoes, stratovolcanoes are characterized by a steep profile with a summit crater and periodic intervals of explosive eruptions and effusive eruptions, although some have collapsed summit craters called calderas. The lava flowing from stratovolcanoes typically cools and hardens before spreading far, due to high viscosity. The magma forming this lava is often felsic, having high-to-intermediate levels of silica (as in rhyolite, dacite, or andesite), with lesser amounts of less-viscous mafic magma. [2] Extensive felsic lava flows are uncommon, but have travelled as far as 15 km (9 mi). [3]

Stratovolcanoes are sometimes called composite volcanoes because of their composite stratified structure, built up from sequential outpourings of erupted materials. They are among the most common types of volcanoes, in contrast to the less common shield volcanoes. [4] Two famous examples of stratovolcanoes are Krakatoa in Indonesia, known for its catastrophic eruption in 1883, and Vesuvius in Italy, whose catastrophic eruption in AD 79 buried the Roman cities of Pompeii and Herculaneum. Both eruptions claimed thousands of lives. In modern times, Mount St. Helens in Washington State, USA and Mount Pinatubo in the Philippines have erupted catastrophically, but with fewer deaths.

The existence of stratovolcanoes on other bodies of the Solar System has not been conclusively demonstrated. [5] One possible exception is the existence of some isolated massifs on Mars, for example the Zephyria Tholus. [6]

Stratovolcanoes are common at subduction zones, forming chains and clusters along plate tectonic boundaries where oceanic crust is drawn under continental crust (continental arc volcanism, e.g. Cascade Range, Andes, Campania) or another oceanic plate ( island arc volcanism, e.g. Japan, Philippines, Aleutian Islands). The magma forming stratovolcanoes rises when water trapped both in hydrated minerals and in the porous basalt rock of the upper oceanic crust is released into mantle rock of the asthenosphere above the sinking oceanic slab. [7] The release of water from hydrated minerals is termed "dewatering", and occurs at specific pressures and temperatures for each mineral, as the plate descends to greater depths. [8] The water freed from the rock lowers the melting point of the overlying mantle rock, which then undergoes partial melting and rises due to its lighter density relative to the surrounding mantle rock, and pools temporarily at the base of the lithosphere. The magma then rises through the crust, incorporating silica-rich crustal rock, leading to a final intermediate composition. When the magma nears the top surface, it pools in a magma chamber within the crust below the stratovolcano. [7]

The processes that trigger the final eruption remain a matter of research. Possible mechanisms include: [9] [10]

These internal triggers may be modified by external triggers such as sector collapse, earthquakes, or interactions with groundwater. Some of these triggers operate only under limited conditions. For example, sector collapse (where part of the flank of a volcano collapses in a massive landslide) can trigger eruption only of a very shallow magma chamber. Magma differentiation and thermal expansion also are ineffective as triggers for eruptions from deep magma chambers. [14] 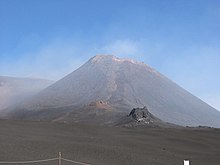 Mount Etna on the island of Sicily, in southern Italy 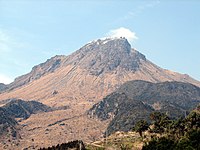 In recorded history, explosive eruptions at subduction zone (convergent-boundary) volcanoes have posed the greatest hazard to civilizations. [15] Subduction-zone stratovolcanoes, such as Mount St. Helens, Mount Etna and Mount Pinatubo, typically erupt with explosive force: the magma is too stiff to allow easy escape of volcanic gases. As a consequence, the tremendous internal pressures of the trapped volcanic gases remain and intermingle in the pasty magma. Following the breaching of the vent and the opening of the crater, the magma degasses explosively. The magma and gases blast out with high speed and full force. [15]

Since 1600 CE, nearly 300,000 people have been killed by volcanic eruptions. [15] Most deaths were caused by pyroclastic flows and lahars, deadly hazards that often accompany explosive eruptions of subduction-zone stratovolcanoes. Pyroclastic flows are swift, avalanche-like, ground-sweeping, incandescent mixtures of hot volcanic debris, fine ash, fragmented lava, and superheated gases that can travel at speeds over 160 km/h (100 mph). Around 30,000 people were killed by pyroclastic flows during the 1902 eruption of Mount Pelée on the island of Martinique in the Caribbean. [15] In March to April 1982, three explosive eruptions of El Chichón in the State of Chiapas in southeastern Mexico, caused the worst volcanic disaster in that country's history. Villages within 8 km (5 mi) of the volcano were destroyed by pyroclastic flows, killing more than 2,000 people. [15]

Two Decade Volcanoes that erupted in 1991 provide examples of stratovolcano hazards. On June 15, Mount Pinatubo spewed an ash cloud 40 km (25 mi) into the air and produced huge pyroclastic surges and lahar floods that devastated a large area around the volcano. Pinatubo, located in Central Luzon just 90 km (56 mi) west-northwest from Manila, had been dormant for 6 centuries before the 1991 eruption, which ranks as one of the largest eruptions in the 20th century. [15] Also in 1991, Japan's Unzen Volcano, located on the island of Kyushu about 40 km (25 mi) east of Nagasaki, awakened from its 200-year slumber to produce a new lava dome at its summit. Beginning in June, the repeated collapse of this erupting dome generated ash flows that swept down the mountain's slopes at speeds as high as 200 km/h (120 mph). Unzen is one of more than 75 active volcanoes in Japan; an eruption in 1792 killed more than 15,000 people—the worst volcanic disaster in the nation's history. [15]

The eruption of Mount Vesuvius in 79 completely smothered the nearby ancient cities of Pompeii and Herculaneum with thick deposits of pyroclastic surges and lava flows. Although the death toll is estimated between 13,000 and 26,000 remains, the exact number is still unclear. Vesuvius is recognized as one of the most dangerous volcanoes, due to its capacity for powerful explosive eruptions combined with the high population density of the surrounding Metropolitan Naples area (totaling about 3.6 million inhabitants).[ citation needed]

Snow-like blanket of Mount Pinatubo's ashfall deposits in a parking lot on Clark Air Base (June 15, 1991)

Apart from possibly affecting the climate, volcanic clouds from explosive eruptions also pose a serious hazard to aviation safety. [15] For example, during the 1982 eruption of Galunggung in Java, British Airways Flight 9 flew into the ash cloud, suffering temporary engine failure and structural damage. During the past two decades, more than 60 airplanes, mostly commercial airliners, have been damaged by in-flight encounters with volcanic ash. Some of these encounters have resulted in the power loss of all engines, necessitating emergency landings. Luckily, to date no crashes have happened because of jet aircraft flying into volcanic ash. [15] Ashfalls are a threat to health when inhaled and ash is also a threat to property with enough accumulation. An accumulation of 30 cm (12 in) is sufficient to cause most buildings to collapse.[ citation needed] Dense clouds of hot volcanic ash, caused by the collapse of an eruptive column or by being laterally expelled from the partial collapse of a volcanic edifice or lava dome during explosive eruptions, can generate devastating pyroclastic flows or surges, which can sweep off everything in their paths.[ citation needed]

Mayon Volcano extruding lava flows during its eruption on December 29, 2009

Lava flows from stratovolcanoes are generally not a significant threat to humans and animals because the highly viscous lava moves slowly enough for everyone to flee out of the path of flow. The lava flows are more of a threat to property. However, not all stratovolcanoes erupt viscous and sticky lava. Nyiragongo is very dangerous because its magma has an unusually low silica content, making it quite fluid. Fluid lavas are typically associated with the formation of broad shield volcanoes such as those of Hawaii, but Nyiragongo has very steep slopes down which lava can flow at up to 100 km/h (60 mph). Lava flows could melt down ice and glaciers that accumulated on the volcano's crater and upper slopes, generating massive lahar flows. Rarely, generally fluid lava could also generate massive lava fountains, while lava of thicker viscosity can solidify within the vent, creating a block which can result in highly explosive eruptions.[ citation needed]

Volcanic bombs are extrusive igneous rocks ranging from the size of books to small cars, that are explosively ejected from stratovolcanoes during their climactic eruptive phases. These "bombs" can travel over 20 km (12 mi) away from the volcano, and present a risk to buildings and living beings while shooting at very high speeds (hundreds of kilometers/miles per hour) through the air. Most bombs do not themselves explode on impact, but rather carry enough force to have destructive effects as if they exploded.[ citation needed]

Lahars (from a Javanese term for volcanic mudflows) are mixtures of volcanic debris and water. Lahars usually come from two sources: rainfall or the melting of snow and ice by hot volcanic elements, such as lava. Depending on the proportion and temperature of water to volcanic material, lahars can range from thick, gooey flows that have the consistency of wet concrete to fast-flowing, soupy floods. [15] As lahars flood down the steep sides of stratovolcanoes, they have the strength and speed to flatten or drown everything in their paths. Hot ash clouds, lava flows and pyroclastic surges ejected during 1985 eruption of Nevado del Ruiz in Colombia melted snow and ice atop the 5,321 m (17,457 ft) high Andean volcano. The ensuing lahar flooded the city of Armero and nearby settlements, killing 25,000 people. [15]

Effects on climate and atmosphere

Paluweh eruption as seen from space

As per the above examples, while the Unzen eruptions have caused deaths and considerable local damage in the historic past, the impact of the June 1991 eruption of Mount Pinatubo was global. Slightly cooler-than-usual temperatures were recorded worldwide, with brilliant sunsets and intense sunrises attributed to the particulates; this eruption lofted particles high into the stratosphere. The aerosols that formed from the sulfur dioxide (SO2), carbon dioxide (CO2), and other gases dispersed around the world. The SO2 mass in this cloud—about 22 million tons—combined with water (both of volcanic and atmospheric origin) formed droplets of sulfuric acid, blocking a portion of the sunlight from reaching the troposphere and ground. The cooling in some regions is thought to have been as much as 0.5 °C (0.9 °F). [15] An eruption the size of Mount Pinatubo tends to affect the weather for a few years; the material injected into the stratosphere gradually drops into the troposphere, where it is washed away by rain and cloud precipitation.[ citation needed]

A similar, but extraordinarily more powerful phenomenon occurred in the cataclysmic April 1815 eruption of Mount Tambora on Sumbawa island in Indonesia. The Mount Tambora eruption is recognized as the most powerful eruption in recorded history. Its eruption cloud lowered global temperatures by as much as 3.5 °C (6.3 °F). [15] In the year following the eruption, most of the Northern Hemisphere experienced sharply cooler temperatures during the summer. In parts of Europe, Asia, Africa, and North America, 1816 was known as the " Year Without a Summer", which caused a considerable agricultural crisis and a brief but bitter famine, which generated a series of distresses across much of the affected continents.[ citation needed]