From Wikipedia
https://en.wikipedia.org/wiki/Stoneware
Term for pottery or other ceramics fired at a relatively high temperature

Stoneware is a rather broad term for pottery or other ceramics fired at a relatively high temperature. [2] A modern technical definition is a vitreous or semi-vitreous ceramic made primarily from stoneware clay or non- refractory fire clay. [3] Whether vitrified or not, it is nonporous (does not soak up liquids); [4] it may or may not be glazed. [5] Historically, around the world, it has been developed after earthenware and before porcelain, and has often been used for high-quality as well as utilitarian wares. 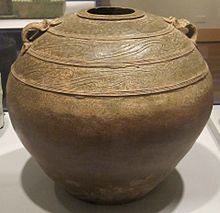 Stoneware is not recognised as a category in traditional East Asian terminology, and much Asian stoneware, such as Chinese Ding ware for example, is counted as porcelain by local definitions. [7] Terms such as "porcellaneous" or "near-porcelain" may be used in such cases. One definition of stoneware is from the Combined Nomenclature of the European Communities, a European industry standard. It states:

Stoneware, which, though dense, impermeable and hard enough to resist scratching by a steel point, differs from porcelain because it is more opaque, and normally only partially vitrified. It may be vitreous or semi-vitreous. It is usually coloured grey or brownish because of impurities in the clay used for its manufacture, and is normally glazed. [4] [8]

In industrial ceramics, five basic categories of stoneware have been suggested: [9] 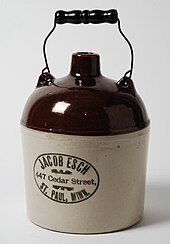 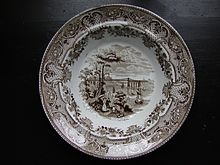 A Staffordshire pottery stoneware plate from the 1850s with white glaze and transfer printed design. Visually this hardly differs from earthenware or porcelain equivalents.

Stoneware can be once-fired or twice-fired. Maximum firing temperatures can vary significantly, from 1100 °C to 1300 °C depending on the flux content. [15] Typically, temperatures will be between 1180 °C and 1280 °C, the higher end of which equate to Bullers Rings 38 to 40 or Seger cones 4 to 8. To produce a better quality fired glaze finish, twice-firing can be used. This can be especially important for formulations composed of highly carbonaceous clays. For these, biscuit firing is around 900 °C, and glost firing (the firing used to form the glaze over the ware) 1180–1280 °C. Water absorption of stoneware products is less than 1 percent. [16]

Another type, Flintless Stoneware, has also been identified. It is defined in the UK Pottery (Health and Welfare) Special Regulations of 1950 as: "Stoneware, the body of which consists of natural clay to which no flint or quartz or other form of free silica has been added." [17]

Traditional East Asian thinking classifies pottery only into "low-fired" and "high-fired" wares, equating to earthenware and porcelain, without the intermediate European class of stoneware, and the many local types of stoneware were mostly classed as porcelain, though often not white and translucent. [18]

Methods of forming stoneware bodies include moulding, slipcasting and wheel throwing. [19] Underglaze and overglaze decoration of many types can be used. Much tableware in stoneware is white-glazed and decorated, and it is then visually highly similar to porcelain or faience earthenware. 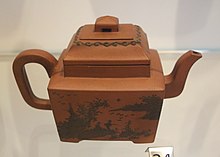 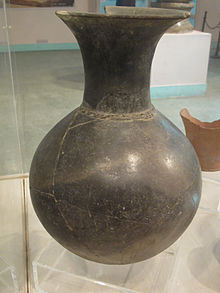 The Indus Valley civilization produced stoneware, [20] with an industry of a nearly industrial-scale mass-production of stoneware bangles throughout the civilization's Mature Period (2600–1900 BC). [21] [22] Early examples of stoneware have been found in China, [23] naturally as an extension of higher temperatures achieved from early development of reduction firing, [24] with large quantities produced from the Han dynasty onwards. [25] [26]

In both medieval China and Japan, stoneware was very common, and several types became admired for their simple forms and subtle glaze effects. Japan did not make porcelain until about 1600, and north China (in contrast to the south) lacks the appropriate kaolin-rich clays for porcelain on a strict Western definition. Jian ware in the Song dynasty was mostly used for tea wares, and appealed to Buddhist monks. Most Longquan celadon, a very important ware in medieval China, was stoneware. Ding ware comes very close to porcelain, and even modern Western sources are notably divided as to how to describe it, although it is not translucent and the body often grey rather than white.

In China, fine pottery was very largely porcelain by the Ming dynasty, and stoneware mostly restricted to utilitarian wares, and those for the poor. Exceptions to this include the unglazed Yixing clay teapot, made from a clay believed to suit tea especially well, and Shiwan ware, used for popular figures and architectural sculpture.

But in Japan many traditional types of stoneware, for example Oribe ware and Shino ware, were preferred for chawan cups for the Japanese tea ceremony, and have been valued up to the present for this and other uses. From a combination of philosophical and nationalist reasons, the primitive or folk art aesthetic qualities of many Japanese village traditions, originally mostly made by farmers in slack periods in the agricultural calendar, have retained considerable prestige. Influential tea masters praised the rough, spontaneous, wabi-sabi, appearance of Japanese rural wares, mostly stoneware, over the perfection of Chinese-inspired porcelain made by highly-skilled specialists.

Stoneware was also produced in Korean pottery, from at least the 5th century, and much of the finest Korean pottery might be so classified; as in China, the border with porcelain is rather fuzzy. Not only celadons but much underglaze blue and white pottery can be called stoneware. Thailand manufactured stoneware in two principal kiln centres, Si Satchanalai and Sukhothai. The firing technology used in Thailand seems to have come from China. [27]

In contrast to Asia, stoneware could be produced in Europe only from the late Middle Ages, as European kilns were less efficient, and the right sorts of clay less common. Some ancient Roman pottery had approached being stoneware, but not as a consistent type of ware. Medieval stoneware remained a much-exported speciality of Germany, especially along the Rhine, until the Renaissance or later, typically used for large jugs, jars and beer-mugs. "Proto-stoneware", such as Pingsdorf ware, and then "near-stoneware" was developed there by 1250, and fully vitrified wares were being produced on a large scale by 1325. [28] The salt-glazed style that became typical was not perfected until the late 15th century. [29] 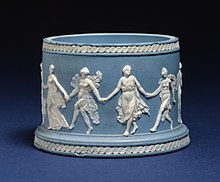 England was to become the most inventive and important European maker of fancy stoneware in the 18th and 19th centuries, [30] but there is no clear evidence for native production before the mid-17th century. German imports were common from the early 16th century at least, and known as "Cologne ware" after the centre of shipping it, rather than making it. Some German potters were probably making it in London in the 1640s, and a father and son Wooltus (or Woolters) were doing so in Southampton in the 1660s. [31]

In the second half of the 18th century Wedgwood developed a number of styles of stoneware, often left unglazed, of which Jasperware is the most famous; it is still made today. Other manufacturers produced their own types, including various ironstone china types, some in fact classified as earthenware.

Many modern commercial glazed tablewares and kitchenwares use stoneware rather than porcelain or bone china, and it is common in craft and studio pottery. The popular Japanese-inspired raku ware is normally stoneware.