South Jeolla Province ( Korean: 전라남도; Hanja: 全羅南道; Jeollanam-do; ), also known as Jeonnam, is a province of South Korea. South Jeolla has a population of 1,902,324 (2014) and has a geographic area of 12,247 km2 (4,729 sq mi) located in the Honam region at the southwestern tip of the Korean Peninsula. South Jeolla borders the provinces of North Jeolla to the north, South Gyeongsang to the northeast, and Jeju to the southwest in the Korea Strait.[ citation needed]

South Jeolla was established in 1896 from the province of Jeolla, one of the Eight Provinces of Korea, consisting of the southern half of its mainland territory and most outlying islands.[ citation needed]

The province is part of the Honam region, and is bounded on the west by the Yellow Sea, on the north by Jeollabuk-do Province, on the south by Jeju Strait, and on the east by Gyeongsangnam-do.

There are almost 2,000 islands along the coastline, about three quarters of which are uninhabited. The coastline is about 6,100 kilometres (3,800 mi) long. Some of the marine products, in particular oyster and seaweed cultivation, are leading in South Korea.

The province is only partially mountainous. The plains along the rivers Seomjin, Yeongsan and Tamjin are suitable for large-scale grain agriculture. There is abundant rainfall in the area, which helps agriculture. The province is also home to the warmest weather on the peninsula. This helps to produce large amounts of agricultural produce, mainly rice, wheat, barley, pulses and potatoes. Vegetables, cotton and fruits are also grown in the province.

A small amount of gold and coal is mined in the province, but industries have also been developed in the area.

Jeollanam-do is divided into 5 cities (si) and 17 counties (gun). Listed below is the name of each entity in English, hangul, and hanja.

According to the census of 2005, of the people of South Jeolla 30.5% follow Christianity (21.8% Protestantism and 8.7% Catholicism) and 16.1% follow Buddhism. [5] 53.4% of the population is mostly not religious or follow Muism and other indigenous religions. 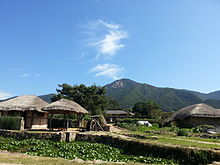