From Wikipedia
https://en.wikipedia.org/wiki/Sociology_of_scientific_knowledge
Study of science as a social activity
See also: Science and technology studies, Technology and society, Science studies, and Social construction of technology 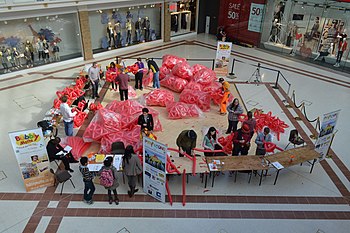 A hands-on activity at the 2014 Cambridge Science Festival, Cambridge, United Kingdom. Use of balloons to explore fundamental mathematics.

Sociologists of scientific knowledge study the development of a scientific field and attempt to identify points of contingency or interpretative flexibility where ambiguities are present. [4] Such variations may be linked to a variety of political, historical, cultural or economic factors. Crucially, the field does not set out to promote relativism or to attack the scientific project; the objective of the researcher is to explain why one interpretation rather than another succeeds due to external social and historical circumstances.

The sociology of scientific knowledge in its Anglophone versions emerged in the 1970s in self-conscious opposition to the sociology of science associated with the American Robert K. Merton, generally considered one of the seminal authors in the sociology of science. Merton's was a kind of "sociology of scientists," which left the cognitive content of science out of sociological account; SSK by contrast aimed at providing sociological explanations of scientific ideas themselves, taking its lead from aspects of the work of Thomas S. Kuhn, [6] but especially from established traditions in cultural anthropology (Durkheim, Mauss) as well as the late Wittgenstein. David Bloor, one of SSK's early champions, has contrasted the so-called 'weak programme' (or 'program'—either spelling is used) which merely gives social explanations for erroneous beliefs, with what he called the ' strong programme', which considers sociological factors as influencing all beliefs.

The weak programme is more of a description of an approach than an organised movement. The term is applied to historians, sociologists and philosophers of science who merely cite sociological factors as being responsible for those beliefs that went wrong. Imre Lakatos and (in some moods) Thomas S. Kuhn might be said to adhere to it. The strong programme is particularly associated with the work of two groups: the 'Edinburgh School' ( David Bloor, Barry Barnes, and their colleagues at the Science Studies Unit at the University of Edinburgh) in the 1970s and '80s, and the 'Bath School' ( Harry Collins and others at the University of Bath) in the same period. "Edinburgh sociologists" and "Bath sociologists" promoted, respectively, the Strong Programme and Empirical Programme of Relativism (EPOR). Also associated with SSK in the 1980s was discourse analysis as applied to science (associated with Michael Mulkay at the University of York), as well as a concern with issues of reflexivity arising from paradoxes relating to SSK's relativist stance towards science and the status of its own knowledge-claims (Steve Woolgar, Malcolm Ashmore). [7]

The sociology of scientific knowledge (SSK) has major international networks through its principal associations, 4S and EASST, with recently established groups in Japan, South Korea, Taiwan, and Latin America. It has made major contributions in recent years to a critical analysis of the biosciences and informatics.

The sociology of mathematical knowledge

Studies of mathematical practice and quasi-empiricism in mathematics are also rightly part of the sociology of knowledge since they focus on the community of those who practice mathematics. Since Eugene Wigner raised the issue in 1960 and Hilary Putnam made it more rigorous in 1975, the question of why fields such as physics and mathematics should agree so well has been debated. Proposed solutions point out that the fundamental constituents of mathematical thought, space, form-structure, and number-proportion are also the fundamental constituents of physics. It is also worthwhile to note that physics is more than merely modeling of reality and the objective basis is upon observational demonstration. Another approach is to suggest that there is no deep problem, that the division of human scientific thinking through using words such as 'mathematics' and 'physics' is only useful in their practical everyday function to categorize and distinguish.

Fundamental contributions to the sociology of mathematical knowledge have been made by Sal Restivo and David Bloor. Restivo draws upon the work of scholars such as Oswald Spengler (The Decline of the West, 1918), Raymond Louis Wilder and Leslie Alvin White, as well as contemporary sociologists of knowledge and science studies scholars. David Bloor draws upon Ludwig Wittgenstein and other contemporary thinkers. They both claim that mathematical knowledge is socially constructed and has irreducible contingent and historical factors woven into it. More recently Paul Ernest has proposed a social constructivist account of mathematical knowledge, drawing on the works of both of these sociologists.

SSK has received criticism from theorists of the actor-network theory (ANT) school of science and technology studies. These theorists criticise SSK for sociological reductionism and a human centered universe. SSK, they say, relies too heavily on human actors and social rules and conventions settling scientific controversies. The debate is discussed in an article titled Epistemological Chicken. [8]