Smilax bona-nox, the saw greenbrier, is a species of plant in the family Smilacaceae. It is native to the Southern United States, and eastern Mexico.

Smilax bona-nox, also known as saw greenbrier, is a flowering vine that is prickly with a one-seeded fruit. This plant needs full sun but can also survive in partial shade. It prefers moist soil but is tolerant of numerous soil types. They are commonly found in wooded disturbed areas. Smilax bona-nox is dioecious, meaning it is either male or female. [2] [3] [4] [5]

The rhizome of the Smilax bona-nox.

Smilax bona-nox produces fruits, one seeded drupes, that are dispersed by animals.Fruits are black and blue in color. The fruits are edible to humans and wildlife. Fruit harvest is during the fall and summer months. [4]

Smilax bona-nox ranges across much of the eastern part of the U.S. It is distributed as far south as southern Florida, west to the edge of Texas and eastern Mexico, north to Maryland, Kentucky and southern parts of Indiana and Illinois, Missouri and Southeastern Kansas. Smilax bona-nox also occurs in Bermuda and Mexico. [5]

Smilax bona-nox are dispersed by being eaten and passed by wildlife. Mainly small animals and songbirds partake in their fruits but they are also eaten by deer and black bears. [7]

Smilax bona-nox is easy to grow by seed, and should be grown near lattice work or near something it can climb. This is a climbing plant that needs something to hold on to. It should also be given plenty of room as it will grow quickly and will shade other plants. [8]

Smilax bona-nox has many uses. The leaves of this plant were used for cigarette wrappers by the Native Americans. The roots can be used not only to make bread but also as medicines. The roots of this plant are known to help urinary tract infections and as an antioxidant. [4]

Smilax bona-nox is edible whether cooked or not. If cooked, the roots can be made into gelatin if grounded into a powder. Younger shoots are edible raw or cooked. The fruits are also edible; they are black and blue. [4] [9] 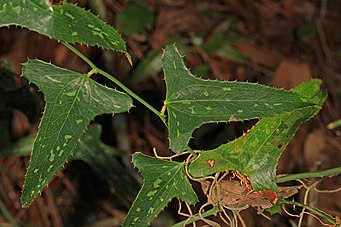 The Smilax bona-nox is tolerant to the occasional control burns and natural fires. Because they have rhizomes under ground, they can still sprout even when they have lost the tops of their plants. Corn-like forms can grow along with their rhizomes. [11]