From Wikipedia
https://en.wikipedia.org/wiki/Slip_(ceramics)
Slurry of clay and water 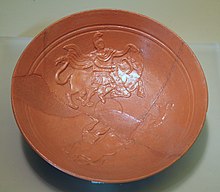 A slip is a clay slurry used to produce pottery and other ceramic wares. [1] Liquified clay, in which there is no fixed ratio of water and clay, is called slip or clay slurry which is used either for joining leather-hard (semi-hardened) clay body (pieces of pottery) together by slipcasting with mould, glazing or decorating the pottery by painting or dipping the pottery with slip. [2] Pottery on which slip has been applied either for glazing or decoration is called the slipware.

Engobe, from the French word for slip, is an American English term for materials similar to a slip, though the definition seems variable. Some American sources say it is synonymous with slip, and use it in preference to "slip", [3] while others draw distinctions, [4] mainly in terms of engobe using materials other than clay. On one definition engobe, as compared to slip, has somewhat lower clay content, higher proportion of flux, and added filler, and in some cases a colorant. [5] It is mostly used in relation to contemporary pottery, but sometimes for slip in historical contexts.

An additive with deflocculant properties, such as sodium silicate, can be added to the slip to disperse the raw material particles. This allows a higher solids content to be used, or allows a fluid slip to be produced with a minimal amount of water so that drying shrinkage is minimised, which is important during slipcasting. [6] Usually the mixing of slip is undertaken in a blunger [7] although it can be done using other types of mixers or even by hand. 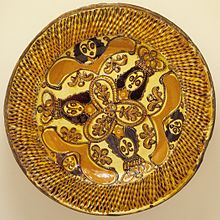 Charger with Charles II in the Boscobel Oak, English, c. 1685. The plate's diameter is 43 cm; such large plates, for display rather than use, take slip-trailing to an extreme, building up lattices of thick trails of slip. 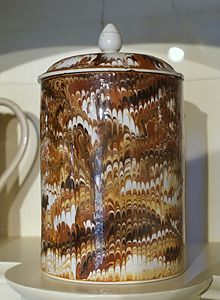 Slipware is pottery decorated by slip placed onto a wet or leather-hard clay body surface by dipping, painting or splashing. Some slips will also give a moderate degree of the hardening effect, and decreased permeability, that a ceramic glaze would give. Often only pottery where the slip creates patterns or images will be described as slipware, as opposed to the many types where a plain slip is applied to the whole body, for example most fine wares in Ancient Roman pottery, such as African red slip ware (note: "slip ware" not "slipware"). Decorative slips may be a different colour than the underlying clay body or offer other decorative qualities such as a shiny surface.

Selectively applying layers of colored slips can create the effect of a painted ceramic, such as in the black-figure or red-figure pottery styles of Ancient Greek pottery. Slip decoration is an ancient technique in Chinese pottery also, used to cover whole vessels over 4,000 years ago. [9] Principal techniques include slip-painting, where the slip is treated like paint and used to create a design with brushes or other implements, and slip-trailing, where the slip, usually rather thick, is dripped onto the body. Slip-trailed wares, especially if Early Modern English, are called slipware.

Chinese pottery also used techniques where patterns, images or calligraphy were created as part-dried slip was cut away to reveal a lower layer of slip or the main clay body in a contrasting colour. The latter of these is called the "cut-glaze" technique. [10]

Slipware may be carved or burnished to change the surface appearance of the ware. Specialized slip recipes may be applied to biscuit ware and then refired.

Barbotine (another French word for slip) covers different techniques in English, but in the sense used of late 19th-century art pottery is a technique for painting wares in polychrome slips to make painting-like images on pottery.

Other uses in pottery

A slip may be made for various other purposes in the production and decoration of ceramics, such as slip can be used to mix the constituents of a clay body.