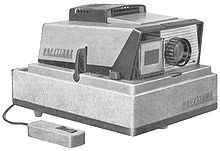 A slide projector is an opto-mechanical device for showing photographic slides.

35 mm slide projectors, direct descendants of the larger-format magic lantern, first came into widespread use during the 1950s as a form of occasional home entertainment; family members and friends would gather to view slide shows. Reversal film was much in use, and supplied slides snapped during vacations and at family events. Slide projectors were also widely used in educational and other institutional settings.

Photographic film slides and projectors have mostly been replaced by image files on digital storage media shown on a projection screen by using a video projector or simply displayed on a large-screen video monitor.

A carousel slide projector. The example pictured is a Kodak Carousel model 4400, dating from the mid-1980s.

A continuous-slide lantern was patented in 1881. [1] It included a dissolving views apparatus. [2]

A projector has four main elements:

A flat piece of heat-absorbing glass is often placed in the light path between the condensing lens and the slide, to avoid damaging the latter. This glass transmits visible wavelengths but absorbs infrared. Light passes through the transparent slide and lens, and the resulting image is enlarged and projected onto a perpendicular flat screen so the audience can view its reflection. Alternatively, the image may be projected onto a translucent "rear projection" screen, often used for continuous automatic display for close viewing. This form of projection also avoids the audience interrupting the light stream by casting their shadows on the projection or by bumping into the projector.[ citation needed]