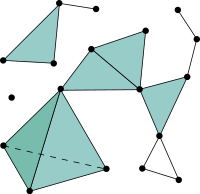 is a set of simplices that satisfies the following conditions:

1. Every face of a simplex from

.
2. The non-empty intersection of any two simplices

is a face of both

equals k. For instance, a simplicial 2-complex must contain at least one triangle, and must not contain any tetrahedra or higher-dimensional simplices.

A pure or homogeneous simplicial k-complex

A facet is a maximal simplex, i.e., any simplex in a complex that is not a face of any larger simplex. [1] (Note the difference from a "face" of a simplex). A pure simplicial complex can be thought of as a complex where all facets have the same dimension. For (boundary complexes of) simplicial polytopes this coincides with the meaning from polyhedral combinatorics.

Sometimes the term face is used to refer to a simplex of a complex, not to be confused with a face of a simplex.

For a simplicial complex embedded in a k-dimensional space, the k-faces are sometimes referred to as its cells. The term cell is sometimes used in a broader sense to denote a set homeomorphic to a simplex, leading to the definition of cell complex.

The underlying space, sometimes called the carrier of a simplicial complex is the union of its simplices.

Let K be a simplicial complex and let S be a collection of simplices in K.

The closure of S (denoted

) is the smallest simplicial subcomplex of K that contains each simplex in S.

is obtained by repeatedly adding to S each face of every simplex in S.

The star of S (denoted

) is the union of the stars of each simplex in S. For a single simplex s, the star of s is the set of simplices having s as a face[ clarification needed]. The star of S is generally not a simplicial complex itself, so some authors define the closed star of S (denoted

the closure of the star of S.

The link of S (denoted

. It is the closed star of S minus the stars of all faces of S.

Combinatorialists often study the f-vector of a simplicial d-complex Δ, which is the integer sequence

, where fi is the number of (i−1)-dimensional faces of Δ (by convention, f0 = 1 unless Δ is the empty complex). For instance, if Δ is the boundary of the octahedron, then its f-vector is (1, 6, 12, 8), and if Δ is the first simplicial complex pictured above, its f-vector is (1, 18, 23, 8, 1). A complete characterization of the possible f-vectors of simplicial complexes is given by the Kruskal–Katona theorem.

By using the f-vector of a simplicial d-complex Δ as coefficients of a polynomial (written in decreasing order of exponents), we obtain the f-polynomial of Δ. In our two examples above, the f-polynomials would be

and the h-vector of Δ is

We calculate the h-vector of the octahedron boundary (our first example) as follows:

So the h-vector of the boundary of the octahedron is (1, 3, 3, 1). It is not an accident this h-vector is symmetric. In fact, this happens whenever Δ is the boundary of a simplicial polytope (these are the Dehn–Sommerville equations). In general, however, the h-vector of a simplicial complex is not even necessarily positive. For instance, if we take Δ to be the 2-complex given by two triangles intersecting only at a common vertex, the resulting h-vector is (1, 3, −2).

A complete characterization of all simplicial polytope h-vectors is given by the celebrated g-theorem of Stanley, Billera, and Lee.

Simplicial complexes can be seen to have the same geometric structure as the contact graph of a sphere packing (a graph where vertices are the centers of spheres and edges exist if the corresponding packing elements touch each other) and as such can be used to determine the combinatorics of sphere packings, such as the number of touching pairs (1-simplices), touching triplets (2-simplices), and touching quadruples (3-simplices) in a sphere packing.