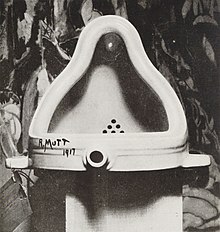 Shock art is contemporary art that incorporates disturbing imagery, sound or scents to create a shocking experience. It is a way to disturb "smug, complacent and hypocritical" people. [2] While the art form's proponents argue that it is "imbedded with social commentary" and critics dismiss it as "cultural pollution", it is an increasingly marketable art, described by one art critic in 2001 as "the safest kind of art that an artist can go into the business of making today". [3] [4] But while shock art may attract curators and make headlines, Reason magazine's 2007 review of The Art Newspaper suggested that traditional art shows continue to have more popular appeal. [5]

While the movement has become increasingly mainstream, the roots of shock art run deep into art history; Royal Academy curator Norman Rosenthal noted in the catalog for the "shock art" exhibition Sensation in 1997 that artists have always been in the business of conquering "territory that hitherto has been taboo". [3] In China, which experienced an active "shock art" movement following the Tiananmen Square protests of 1989, [6] encroachment on the taboo has led the Ministry of Culture to attempt a crackdown on the artform, [7] banning the use of corpses or body parts in art. [8]

Similarly, philosopher Stephen Hicks describes shock art as the inevitable conclusion of trends initiated in the late 19th century modernist art movement. [9] Traditionally, art was usually intended to be a representation of reality and a celebration of human or natural beauty, but by the late 1800s modernists began questioning the boundaries of what constituted art. "[T]he first modernists of the late 1800s set themselves systematically to the project of isolating all the elements of art and eliminating them or flying in the face of them," often by portraying the world as "fractured, decaying, horrifying, depressing, empty, and ultimately unintelligible." The "grand-daddy" of this trend was Marcel Duchamp with his 1916 work Fountain, a urinal he signed and submitted to an art show. Similar works that broke with past aesthetic traditions included Edvard Munch's The Scream (1893) or Pablo Picasso's Les Demoiselles d'Avignon (1907). A parallel trend was "reductionism": emphasizing the basic elements of art such as colors or shapes, often in a manner that minimizes the need for artistic skill. Hicks cites White on White (1918) by Kazimir Malevich. A subsequent trend was using art as ironic or kitschy commentary: "if traditionally the art object is a special and unique artifact, then we can eliminate the art object's special status by making art works that are reproductions of excruciatingly ordinary objects", as with Andy Warhol's factory produced silk screens of consumer products. With a shift to post-modernist art in the 1970s and '80s, a preoccupation with politics, sex and scatology appears as with Piss Christ (1987) by Andres Serrano, and the performance art/punk rock musician GG Allin who became notorious for defecating on stage. "[W]e have reached a dead end: From Duchamp's Piss on art at the beginning of the century to Allin's Shit on you at the end—that is not a significant development over the course of a century."

In 1998, John Windsor in The Independent said that the work of the Young British Artists seemed tame compared with that of the "shock art" of the 1970s, including "kinky outrages" at the Nicholas Treadwell Gallery, amongst which were a "hanging, anatomically detailed leather straitjacket, complete with genitals", titled Pink Crucifixion, by Mandy Havers. [10]

In the United States in 2008, a court case went to trial to determine whether the fetish films of Ira Isaacs constitute shock art, as the director claims, or unlawful obscenity. [11] [12]