From Wikipedia
(Redirected from Sherd)
https://en.wikipedia.org/wiki/Sherd
Glossary for archaeological terms

This page is a glossary of archaeology, the study of the human past from material remains.

absolute age
The age of an object with reference to a fixed and specific time scale, as determined by some method of absolute dating, e.g. 10,000 BP or 1.9 mya. [1]
absolute dating
Ascertaining the age of an object with reference to a fixed and specific time scale (e.g. calendar years or radiocarbon years), as opposed to relative dating. [2]
aerial archaeology
Archaeological investigations conducted from the air, e.g. using aerial photography or satellite imagery.
antiquarian
antiquary
A person interested in the collection, curation and/or study of antiquities, particularly in reference to the intellectual tradition that developed in Europe in the 16th–17th centuries and is considered a precursor to modern archaeology. [3]
antiquarianism
An intellectual tradition of inquiry that developed in Europe in the 16th and early 17th centuries AD as a result of new interests in nature, antiquity, the Renaissance of learning, and the addition of time‐depth to people's view of the world. [4]
antiquities
Ancient artefacts, particularly in the context of their trade and collection.
antiquity
The ancient past, in particular the period of the earliest historic civilizations (see classical antiquity).
archaeobotany
Subdiscipline devoted to the analysis of plant remains in the archaeological record.
archaeozoology
See zooarchaeology.
archaeologist
A person engaged in the study or profession of archaeology.
archaeology
archeology
The academic discipline concerned with the study of the human past through material remains.
artefact
artifact
A physical object made by humans.
assemblage
A set of artefacts or ecofacts found together, from the same place and time. [5] [6] Can refer to the total assemblage from a site, or a specific type of artefact, e.g. lithic assemblage, zooarchaeological assemblage. [7]
association
Two or more excavated objects that are thought to be related are said to be in association, e.g. artefacts discovered in close proximity within the same context, or architectural features thought to have been standing at the same time.

backfill
1.  To re-fill a trench once an excavation has been completed.
2.  Material used for backfilling, usually spoil from the original excavation.
baulk
balk
A wall of earth left in place between excavated areas in order to maintain the structural integrity of the trench and/or expose a section to aid in interpretation.
bladelet
Type of stone tool; a small blade characteristic of Upper Palaeolithic Europe. [8]

C14 dating
See radiocarbon dating.
context
1.  As in common usage, information relating to where an artefact or feature was found and what it was found in association with.
2.  In single context excavation, a well-defined stratigraphic unit relating to a single depositional event, used as the primary unit for recording and analysis.
culture
An archaeological culture is a recurring assemblage of artifacts from a specific time and place that may constitute the material culture remains of a particular past human society.

dig
An informal term for an archaeological excavation.
dry sieving
A method of sifting artefacts from excavated sediments by shaking it through sieves or meshes of varying sizes. As opposed to wet sieving, which uses water. [9]

earthworks
Earthworks are artificial changes in land level, typically made from piles of artificially placed or sculpted rocks and soil
environmental archaeology
Environmental archaeology is the science of reconstructing the relationships between past societies and the environments they lived in.
evaluation
See trial trenching.
excavation
Excavation is the exposure, processing and recording of archaeological remains.

fieldwork
Archaeological investigations taking place in the field, e.g. excavations or surveys.
finds
An informal term for artifacts, features and other things discovered by archaeologists.
fill
Material that has accumulated, or been deposited, within a negative feature such as a cut, ditch, or a hollow in a building.
finds processing
The preparation of finds from an excavation for storage or further specialist analysis, typically including washing, labelling, sorting and listing in an inventory.
finds specialist
An archaeologist who specialises in the analysis of a particular type of find, e.g. medieval pottery or prehistoric worked flint.
flotation
Method of separating very small objects from excavated sediments using water. It is particularly important for the recovery of botanical remains and animal bones. [10]
forensic archaeology
Forensic archaeologists employ their knowledge of archaeological techniques and theory in a legal context. This broad description is necessary as forensic archaeology is practiced in a variety of ways around the world. [11]
Funerary archaeology
Funerary archaeology is the study of the treatment and commemoration of the dead. It includes the study of human remains, associated artefacts and monuments.

geoarchaeology
The application of geology and other earth science techniques to archaeology. [12]
geofact
Rocks or other naturally-occurring minerals found in an archaeological context and presumed to have been transported there by humans, but not sufficiently modified to qualify as an artefact. [13]
geoglyph
A form of rock art produced on the ground, either by arranging material on the surface (a positive geoglyph) or removing part of it (a negative geoglyph). [14]

henge
A type of Neolithic earthwork that has a ring-shaped bank and ditch, with the ditch inside the bank.
hillfort
A type of earthwork used as a fortified refuge or defended settlement.

industrial archaeology
Subdiscipline devoted to the study of past industry and industrial heritage.
industry
A typological classification of stone tools, e.g. the Mousterian industry, the Acheulean industry.
in situ
Features, artefacts and other remains in their original depositional context, cf. unstratified.

matrix
1.  The physical material in which finds and other cultural remains are found, e.g. soil or rock. [20]
2.   Harris matrix; a diagram showing the stratigraphic relations between contexts.
megasite
mega-site
A site that is anomalously large in comparison to others from the same period and region, e.g. PPNB megasites, Trypillia megasites. [21]

palaeoethnobotany
paleoethnobotany
See archaeobotany.
pollen diagram
pollen profile
pollen spectrum
A series of side-by-side graphs, produced by archaeobotanists and palynologists, showing the frequency of different types (species) of pollen in a soil sample by depth. Usually presented vertically, with the shallowest samples at the top and the deepest at the bottom, to represent a pollen core or other stratified deposit. The depth of the sample corresponds roughly to how old it is, and therefore the vertical axis may also contain an estimate of its absolute age. Used to visualise the environmental history of the place where the sample was taken. [23] [24]
positive geoglyph
See geoglyph.
potassium–argon dating
See K–Ar dating.
potsherd
A fragment of pottery. [25] In specialised usage sherd is preferred over the more common spelling shard. [26]

quarter sectioning
Sometimes called digging by quadrant, it is a procedure for excavating discrete features (especially those circular or ovoid in shape) where two diagonally opposite quadrants are removed, resulting in two complete cross-sections of a feature.

radiocarbon dating
absolute dating technique used to determine the age of organic materials less than 50,000 years old. Age is determined by examining the loss of the unstable carbon-14 isotope, which is absorbed by all living organisms during their lifespan. The rate of decay of this unstable isotope after the organism has died is assumed to be constant, and is measured in half-lives of 5730 + 40 years, meaning that the amount of carbon-14 is reduced to half the amount after about 5730 years. Dates generated by radiocarbon dating have to be calibrated using dates derived from other absolute dating methods, such as dendrochronology and ice cores.[ citation needed]

screening
See sieving
season
A period of time spent working on a particular site or field project.
Section
A section is a view of the archaeological sequence showing it in the vertical plane, as a cross section, showing the stratigraphy.
sherd
See potsherd
shovel test pit
test holes, usually dug out by a shovel, in order to determine whether the soil contains any cultural remains that are not visible on the surface.
shovelbum
A colloquial term for professional excavators working in cultural resources management in the United States.
sieving
The use of sieves, screens, and meshes to improve the recovery rate of artefacts from excavated sediments ( spoil). Can be divided into dry sieving and wet sieving. [9]
spoil
Loose sediment excavated from a trench.
spoil heap
A pile of sediment from an excavation, usually located next to a trench.

trial trenching
A method of archaeological evaluation used to estimate the archaeological potential of a site. [27]
typology
The classification of objects according to their physical characteristics.

underwater archaeology
Subdiscipline devoted to the study of archaeological remains submerged under seas, lakes, or rivers. [28]
unenclosed
See enclosure.
uniface
Stone tool or other artefact that has only been worked on one side, cf. biface. [29] [30]
unit
1.  In stratigraphic excavation, a context. [31]
2.  In British commercial archaeology, a company providing archaeological services, e.g. the Birmingham University Field Archaeology Unit. [31]
univallate
Hillfort or other enclosed settlement surrounded by a single line of walls or ramparts, cf. multivallate. [32]
unurned
Cremation burial where the remains were not placed in a container ( urn), typical of the Early to Middle Bronze Age in Northern Europe. [33]
updraught kiln
updraft kiln
Type of ceramic kiln which works by drawing hot air from a fire placed adjacent to or below the material to be fired. [34]
urban archaeology
Subdiscipline devoted to the study of archaeology in major cities and towns. [35]
urn
Pottery vessel in which cremated remains were placed for interment; sometimes specially made, but often a repurposed domestic container. [36]
urnfield
Cemetery containing cremation burials in urns. Typical of Late Bronze Age Europe and the eponymous Urnfield culture. [37]
use-wear
Microscopic traces of wear, damage or residue left on the surface of an artefact from use. Use-wear analysis involves studying these traces to discern the function of a tool. [38] 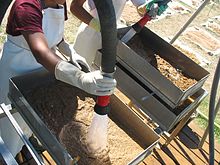 watching brief
A formal programme of observation and investigation conducted during any operation carried out for non-archaeological reasons.
wet sieving
The use of flowing water to force excavated sediment through a screen or mesh and recover small artefacts. It is more effective than dry sieving in heavier soils and, as part of the process of flotation, can be used to recover very small organic remains. [9]

zooarchaeology
Subdiscipline devoted to the analysis of animal remains in the archaeological record.