The Shapiro time delay effect, or gravitational time delay effect, is one of the four classic solar-system tests of general relativity. Radar signals passing near a massive object take slightly longer to travel to a target and longer to return than they would if the mass of the object were not present. The time delay is caused by spacetime dilation, which increases the time it takes light to travel a given distance from the perspective of an outside observer. In a 1964 article entitled Fourth Test of General Relativity, Shapiro wrote: [1]

Because, according to the general theory, the speed of a light wave depends on the strength of the gravitational potential along its path, these time delays should thereby be increased by almost 2×10−4 sec when the radar pulses pass near the sun. Such a change, equivalent to 60 km in distance, could now be measured over the required path length to within about 5 to 10% with presently obtainable equipment.

Throughout this article discussing the time delay, Shapiro uses c as the speed of light and calculates the time delay of the passage of light waves or rays over finite coordinate distance according to a Schwarzschild solution to the Einstein field equations.

The time delay effect was first predicted in 1964, by Irwin Shapiro. Shapiro proposed an observational test of his prediction: bounce radar beams off the surface of Venus and Mercury and measure the round-trip travel time. When the Earth, Sun, and Venus are most favorably aligned, Shapiro showed that the expected time delay, due to the presence of the Sun, of a radar signal traveling from the Earth to Venus and back, would be about 200 microseconds, [1] well within the limitations of 1960s-era technology.

The first tests, performed in 1966 and 1967 using the MIT Haystack radar antenna, were successful, matching the predicted amount of time delay. [2] The experiments have been repeated many times since then, with increasing accuracy. 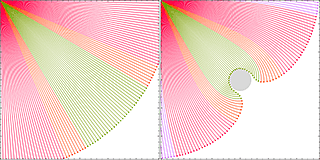 Left: unperturbed lightrays in a flat spacetime, right: Shapiro-delayed and deflected lightrays in the vicinity of a gravitating mass (click to start the animation)

Time delay due to light traveling around a single mass

Shapiro's original formulation was derived from the Schwarzschild solution and included terms to the first order in solar mass (M) for a proposed Earth-based radar pulse bouncing off an inner planet and returning passing close to the Sun: [1]

where d is the distance of closest approach of the radar wave to the center of the Sun, xe is the distance along the line of flight from the Earth-based antenna to the point of closest approach to the Sun, and xp represents the distance along the path from this point to the planet. The right-hand side of this equation is primarily due to the variable speed of the light ray; the contribution from the change in path, being of second order in M, is negligible. O is the Landau symbol of order of error.

For a signal going around a massive object, the time delay can be calculated as the following:[ citation needed]

Using Δx = cΔt, this formula can also be written as

which is a fictive extra distance the light has to travel. Here

is the Schwarzschild radius.

which is twice the Newtonian prediction (with

The doubling of the Shapiro factor can be explained by the fact that there is not only the gravitational time dilation, but also the stretching of space, both of which contribute equally in general relativity for the time delay as they also do for the deflection of light.

Shapiro delay must be considered along with ranging data when trying to accurately determine the distance to interplanetary probes such as the Voyager and Pioneer spacecraft.[ citation needed]