Sequentia cyclica super "Dies irae" ex Missa pro defunctis, commonly known as Sequentia cyclica, is a piano composition by Kaikhosru Shapurji Sorabji. Written between 1948 and 1949, it is a set of 27 variations on the medieval sequence Dies irae and is widely considered one of Sorabji's greatest works. With a duration of about eight hours, it is one of the longest piano pieces of all time.

The Gregorian chant Dies irae, the text of which has traditionally been attributed to Thomas of Celano, a 13th-century Italian friar, attracted Sorabji throughout his life. [1] It was used in ten of his works, including two variation sets. [2] The first of these, Variazioni e fuga triplice sopra "Dies irae" per pianoforte (1923–26), is a work Sorabji became dissatisfied with, writing in a 1930 letter to Erik Chisholm, "I shall probably indeed I am seriously thinking of destroying Dies Irae—I have been looking on it with a sour cold eye and I don't think really, it pleases me any more ... and write an entirely new work thereon later." [3]

It has usually been accepted that Sorabji began work on Sequentia cyclica in 1948, although Marc-André Roberge's [ fr] catalogue of Sorabji's works states it was started before January 1948. The work was completed on 27 April 1949. [4] In a letter written shortly after, Sorabji told Chisholm that he finished it during his third attack of malaria. [5] 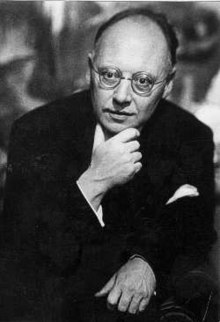 Egon Petri, to whom the work was dedicated

The score of Sequentia cyclica contains a prefatory note relating to the work and its performance. Sorabji elaborated on the relative lack of expression marks in the score, writing:

The comparative lack of what are quaintly called "expression marks" in this work is thus explained. The composer considers that the music itself makes clear what "expression" is needed, if any in any particular passage. The "intelligence" of the player will do—or undo—the rest. [6]

The full name of the piece, as it appears on the title page of the manuscript, is Sequentia cyclica super "Dies irae" ex Missa pro defunctis in clavicembali usum Kaikhosru Shapurji Sorabji scripsit. [7] [n 1] It was dedicated to Dutch pianist Egon Petri, who at one time contemplated performing Sorabji's Opus clavicembalisticum. Sorabji corresponded with him over the years and considered him one of the greatest living pianists. [8]

Sequentia cyclica is one of Sorabji's most highly regarded works, even being considered by some to be his greatest. [9] [10] In 1953, Sorabji described it as "the climax and crown of his work for the piano and, in all probability, the last he will write", [11] and he continued to regard it as one of his finest works up to his last days. [12]

The work received its premiere on 18 June 2010 in Glasgow, UK, under the hands of Jonathan Powell, who had given partial performances of the piece in 2008 and earlier that year, and went on to play Sequentia cyclica elsewhere in Europe and the United States. Powell recorded the piece in 2015 and it was released in 2020 by Piano Classics. [13]

Although Sorabji's first set of variations on the chant, Variazioni e fuga triplice sopra "Dies irae" per pianoforte (1923–26), is a large work, comprising 64 variations and spanning 201 pages, Sequentia cyclica is even vaster. Its theme and 27 variations cover 335 pages and take about eight hours to perform, [n 2] making the work one of the longest piano pieces ever composed. [15]

In discussing Sorabji's variation sets, musicologist Simon John Abrahams writes, "Sorabji often follows the examples of Reger and Szymanowski in producing variations that maintain only the most tenuous of connections to the original theme". [16] A similar view was expressed by Sorabji himself, who wrote that the variations in Sequentia cyclica were "hardly to be called variations in the ordinary sense". [17] Some of them set the theme multiple times (e.g. variations 8, 14 and 18, where it is set seven, four and two times respectively), which has been cited as one of the reasons for the work's length. [18] [19]

Theme, "Largo. Legatissimo sempre e nello stile medioevale detto 'organum'": The opening presents the entire Dies irae chant, with its repetitions being skipped. The section is in F-sharp minor, with the theme appearing in plain chords and underpinned by the sonority C-sharp– F-sharp–C-sharp nearly throughout. [20]

Variation 14, "Punta d'organo": This variation uses the note B as a pedal point throughout. Like other of Sorabji's similarly titled movements of a nocturnal character, it has been likened to "Le gibet", the second section of Ravel's Gaspard de la nuit. [21] Towards the end, Sorabji switches to a B-flat note in the bass, on which the movement concludes. [20]

Variation 22, "Passacaglia": The theme of the passacaglia is the shortened version of the Dies irae that has been prevalent in most works to use the melody (i.e. the first three phrases). It contains 100 variations, with the theme gradually rising from the bass to the soprano (with a voice change every 25 variations). Soft textures predominate in the later variations, with the theme returning to the bass towards the end. [22]

Variation 26, "Largamente pomposo e maestoso": This variation begins and ends with sections built largely on chordal textures, with a "Quasi Cadenza-fantasiata" being placed between them. [22]

Variation 27, "Fuga quintuplice a due, tre, quattro, cinque e sei voci ed a cinque soggetti": The final variation is a six-voice fugue on five subjects. It is broken down into five fugues (each on a single theme), going from two voices to six (one being added with each fugue). The fifth fugue culminates in a section titled "Le Strette: delle quinta parte della fuga", which is followed by a "Stretto maestrale". This passage is one of the few polyrhythmic fugal climaxes in Sorabji's output, along with that in his Piano Symphony No. 2 (1954). [23] The work concludes with a "Coda" ending in C minor, thus establishing a tritonal relationship with the F-sharp minor opening of the piece—a reference to the medieval notion of " diabolus in musica". [22]