Self-Portrait at the Age of 13 Information 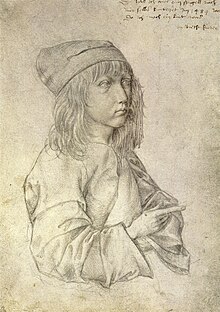 Self-Portrait at the age of 13 is a silverpoint drawing by Albrecht Dürer, dated 1484. It is now in the Albertina museum, Vienna. It is the artist's oldest known drawing, and one of the oldest extant self-portraits in European art. It was completed two years before Albrecht left his father's apprenticeship to study under Michael Wolgemut, who he quickly realised was a valuable mentor but whom the younger man also recognized to be unequal to himself in his abilities. [1]

Throughout his life Dürer expressed resolute self-confidence. He celebrated himself in his drawings and writings. [2] His four known self-portraits were all completed before he entered his 30s, and so they predate his mature period. As the other three self-portraits, which are oil paintings, this work can be interpreted as having recorded Dürer's awareness of, and confidence in, his great-yet-still-developing artistic powers. This tone is especially evident in the subject's precocious countenance. [3] Dürer presents himself in half-length and in side view, in a pose closely resembling the one seen in a surviving portrait attributed to his father, also Albrecht, who was a goldsmith by profession. [2]

The artist's left arm is raised, while his index finger, in a gesture seen many times in depictions of Christ, boldly points to an unidentified area outside the picture’s frame. Dürer presents himself in a flattering light: He has long hair, he has the pleasing appearance of a fresh-faced boy, and he has elegant and elongated fingers (at the time, this was a characteristic both fashionable and seen to indicate draftsman skills). [2] Dürer wrote in 1528, in reference to his relatively unsophisticated youthful drawings, that even his simple sketches expressed "the spiritual essence of an artist's creative impulse"—since a talented artist could express more in a simple line-drawing than a mediocre artist could express in a year of painting. [4]

It is said that the self-portrait was set as a task by Albrecht the Elder as a challenge for his son. [5] It was signed at some unknown later date with the words "This I drew myself from a mirror in the year 1484, when I was still a child. Albrecht Dürer". [6] Dürer was born in May 1471, and he himself did not title the work; given that it was completed in 1484, it is almost equally as likely Dürer had created it when he had been 12 years old, even though the self-portrait is commonly known by the "at the age of 13" title. [3] [7]