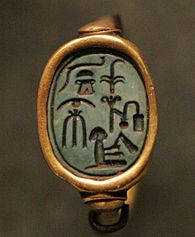 The hieroglyph depicts the 3 major components of a scribe's equipment:

The scribe equipment hieroglyph is often used as a determinative for items relating to writing or the scribe. Combined with the determinative for person 𓀀 ( Gardiner no. A1), the hieroglyph is read as zẖꜣw, probably pronounced [θaçʀaw] [2] or [θiçɫu] [3] in Old Egyptian, and [saçʔaw] or [saçʔu] following the changes in pronunciation of z in Middle Egyptian and of ꜣ in Late Egyptian. By the Coptic stage of the language, this had lost its glottal stop and ending, reducing to ⲥⲁϧ [sax] (pl. ⲥϧⲟⲩⲓ [sxwi]). [4]

Often the transliteration "sesh" appears, derived from the mistaken reading sš propagated in the dictionary and books of E. A. W. Budge. This reading is found as a phonetic complement using the signs for z and š, leading to the misunderstanding. However, Old Kingdom Egyptian lacked a distinct sign for the ẖ sound and the Coptic descendant shows that the original second consonant was indeed the palatalized fricative ẖ not the (alveolo-)palatal sibilant š, [5] (š being the pool-lake-basin (hieroglyph) in the Egyptian language).

When used as the verb zẖꜣ, the hieroglyph has a variety of related meanings: to write, to draw, to make a design, to do into writing. As the noun zẖꜣ, it means: [6] writing, inscription, written roll of papyrus, book, copy of a document, & handwriting. In plural usage: writings, letters, books, documents, archives, decrees, handwriting, the columns of a book, papers, title-deeds, registers, and literature. [7]

Equipment, as an artifact