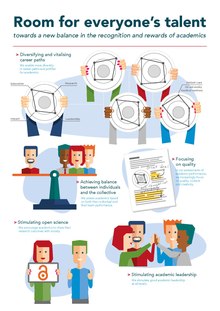 Science policy is concerned with the allocation of resources for the conduct of science towards the goal of best serving the public interest. Topics include the funding of science, the careers of scientists, and the translation of scientific discoveries into technological innovation to promote commercial product development, competitiveness, economic growth and economic development. Science policy focuses on knowledge production and role of knowledge networks, collaborations, and the complex distributions of expertise, equipment, and know-how. Understanding the processes and organizational context of generating novel and innovative science and engineering ideas is a core concern of science policy. Science policy topics include weapons development, health care and environmental monitoring.

Science policy thus deals with the entire domain of issues that involve science. A large and complex web of factors influences the development of science and engineering that includes government science policymakers, private firms (including both national and multi-national firms), social movements, media, non-governmental organizations, universities, and other research institutions. In addition, science policy is increasingly international as defined by the global operations of firms and research institutions as well as by the collaborative networks of non-governmental organizations and of the nature of scientific inquiry itself.

State policy has influenced the funding of public works and science for thousands of years, dating at least from the time of the Mohists, who inspired the study of logic during the period of the Hundred Schools of Thought, and the study of defensive fortifications during the Warring States period in China. General levies of labor and grain were collected to fund great public works in China, including the accumulation of grain for distribution in times of famine, [1] for the building of levees to control flooding by the great rivers of China, for the building of canals and locks to connect rivers of China, some of which flowed in opposite directions to each other, [2] and for the building of bridges across these rivers. These projects required a civil service, the scholars, some of whom demonstrated great mastery of hydraulics.

In Italy, Galileo noted that individual taxation of minute amounts could fund large sums to the State, which could then fund his research on the trajectory of cannonballs, noting that "each individual soldier was being paid from coin collected by a general tax of pennies and farthings, while even a million of gold would not suffice to pay the entire army." [3]

In Great Britain, Lord Chancellor Sir Francis Bacon had a formative effect on science policy with his identification of "experiments of ... light, more penetrating into nature [than what others know]", [4] which today we call the crucial experiment. Governmental approval of the Royal Society recognized a scientific community which exists to this day. British prizes for research spurred the development of an accurate, portable chronometer, which directly enabled reliable navigation and sailing on the high seas, and also funded Babbage's computer.

Public policy can directly affect the funding of capital equipment, intellectual infrastructure for industrial research, by providing tax incentives to those organizations who fund research. Vannevar Bush, director of the office of scientific research and development for the U.S. government in July 1945, wrote "Science is a proper concern of government" [6] Vannevar Bush directed the forerunner of the National Science Foundation, and his writings directly inspired researchers to invent the hyperlink and the computer mouse. The DARPA initiative to support computing was the impetus for the Internet Protocol stack. In the same way that scientific consortiums like CERN for high-energy physics have a commitment to public knowledge, access to this public knowledge in physics led directly to CERN's sponsorship of development of the World Wide Web and standard Internet access for all.

The programs that are funded are often divided into four basic categories: basic research, applied research, development, and facilities and equipment. [7][ not verified in body] Translational research is a newer concept that seeks to bridge the gap between basic science and practical applications.

Basic science attempts to stimulate breakthroughs. Breakthroughs often lead to an explosion of new technologies and approaches. Once the basic result is developed, it is widely published; however conversion into a practical product is left for the free market. However, many governments have developed risk-taking research and development organizations to take basic theoretical research over the edge into practical engineering. In the U.S., this function is performed by DARPA. [8]

In contrast, technology development is a policy in which engineering, the application of science, is supported rather than basic science. [9] The emphasis is usually given to projects that increase important strategic or commercial engineering knowledge.[ citation needed] The most extreme[ dubious – discuss] success story is undoubtedly the Manhattan Project that developed nuclear weapons. Another remarkable success story was the "X-vehicle" studies that gave the US a lasting lead in aerospace technologies. [10]

These exemplify two disparate approaches: The Manhattan Project was huge, and spent freely on the most risky alternative approaches. The project members believed that failure would result in their enslavement or destruction by Nazi Germany. Each X-project built an aircraft whose only purpose was to develop a particular technology. The plan was to build a few cheap aircraft of each type, fly a test series, often to the destruction of an aircraft, and never design an aircraft for a practical mission. The only mission was technology development. [11]

A number of high-profile technology developments have failed. The US Space Shuttle failed to meet its cost or flight schedule goals. Most observers explain the project as over constrained: the cost goals too aggressive, the technology and mission too underpowered and undefined.

The Japanese fifth generation computer systems project met every technological goal, but failed to produce commercially important artificial intelligence. Many observers[ who?] believe that the Japanese tried to force engineering beyond available science by brute investment. Half the amount spent on basic research rather might have produced ten times the result.[ citation needed]

Utilitarian policies prioritize scientific projects that significantly reduce suffering for larger numbers of people. This approach would mainly consider the numbers of people that can be helped by a research policy. Research is more likely to be supported when it costs less and has greater benefits. Utilitarian research often pursues incremental improvements rather than dramatic advancements in knowledge, or break-through solutions, which are more commercially viable.

In contrast, monumental science is a policy in which science is supported for the sake of a greater understanding of the universe, rather than for specific short-term practical goals. This designation covers both large projects, often with large facilities, and smaller research that does not have obvious practical applications and are often overlooked. While these projects may not always have obvious practical outcomes, they provide education of future scientists, and advancement of scientific knowledge of lasting worth about the basic building blocks of science. [12]

This policy approach prioritizes efficiently teaching all available science to those who can use it, rather than investing in new science. In particular, the goal is not to lose any existing knowledge, and to find new practical ways to apply the available knowledge. The classic success stories of this method occurred in the 19th century U.S. land-grant universities, which established a strong tradition of research in practical agricultural and engineering methods. More recently, the Green Revolution prevented mass famine over the last thirty years. The focus, unsurprisingly, is usually on developing a robust curriculum and inexpensive practical methods to meet local needs.

Most developed countries usually have a specific national body overseeing national science (including technology and innovation) policy. Many developing countries follow the same fashion. Many governments of developed countries provide considerable funds (primarily to universities) for scientific research (in fields such as physics and geology) as well as social science research (in fields such as economics and history). Much of this is not intended to provide concrete results that may be commercialisable, although research in scientific fields may lead to results that have such potential. Most university research is aimed at gaining publication in peer reviewed academic journals. [14]

A funding body is an organisation that provides research funding in the form of research grants or scholarships. Research councils are funding bodies that are government-funded agencies engaged in the support of research in different disciplines and postgraduate funding. Funding from research councils is typically competitive. As a general rule, more funding is available in science and engineering disciplines than in the arts and social sciences. [15]

There are also European science agencies that operate independently of the European Union, such as the European Science Foundation, European Space Agency, and the European Higher Education Area, created by the Bologna process.

German research funding agencies include the Deutsche Forschungsgemeinschaft, which covers both science and humanities.

The Government of Pakistan has mandated that a certain percentage of gross revenue generated by all telecom service providers be allocated to development and research of information and communication technologies. The National ICT R&D Fund was established in January 2007.

In the United Kingdom, the Haldane principle, that decisions about what to spend research funds on should be made by researchers rather than politicians, is still influential in research policy. There are several university departments with a focus on science policy, such as the Science Policy Research Unit. There are seven grant-awarding Research Councils:

The United States has a long history of government support for science and technology. Science policy in the United States is the responsibility of many organizations throughout the federal government. Much of the large-scale policy is made through the legislative budget process of enacting the yearly federal budget. Further decisions are made by the various federal agencies which spend the funds allocated by Congress, either on in-house research or by granting funds to outside organizations and researchers.

Research funding agencies in the United States are spread among many different departments, which include:

Beyond Sputnik: U.S. Science Policy in the 21st Century [26]

The Honest Broker: Making Sense of Science in Policy and Politics [27]

Frontiers Of Illusion: Science, Technology, and the Politics of Progress [29]

Issues in Science and Technology [32]