Science and technology in the Soviet Union Information

From Wikipedia
https://en.wikipedia.org/wiki/Science_and_technology_in_the_Soviet_Union
Overview of the role of science and technology in the Soviet Union 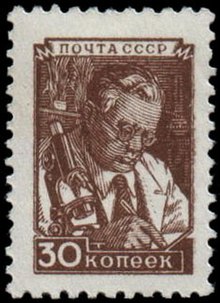 Scientist depicted on a 1955 Soviet stamp

Science and technology in the Soviet Union served as an important part of national politics, practices, and identity. From the time of Lenin until the dissolution of the USSR in the early 1990s, both science and technology were intimately linked to the ideology and practical functioning of the Soviet state, and were pursued along paths both similar and distinct from models in other countries. Many great scientists who worked in Imperial Russia, such as Konstantin Tsiolkovsky, continued work in the USSR and gave birth to Soviet science.

The Soviet government made the development and advancement of science a national priority, emphasizing science at all levels of education and showering top scientists with honours. Very large numbers of engineers graduated every year. Soviet scientists won acclaim in several fields, marked by a highly developed pure science and innovation at the theoretical level, though interpretation and application fell short. They were at the cutting edge of science in fields such as mathematics and in several branches of physical science, notably theoretical nuclear physics, chemistry, and astronomy. The physical chemist and physicist Nikolay Semenov was the first Soviet citizen to win a Nobel Prize, in 1956 among several other Soviet Nobel Prize winners and the mathematician Sergei Novikov was the first Soviet citizen to win a Fields Medal in 1970 followed by Grigory Margulis in 1978 and Vladimir Drinfeld in 1990.

Soviet technology was most highly developed in the fields of nuclear physics, where the arms race with the West convinced policy makers to set aside sufficient resources for research. Due to a crash program directed by Igor Kurchatov (based on spies of Cambridge Five), the Soviet Union was the second nation to develop an atomic bomb, in 1949, four years after the United States. The Soviet Union detonated a hydrogen bomb in 1953, a mere ten months after the United States. Space exploration was also highly developed: in October 1957 the Soviet Union launched the first artificial satellite, Sputnik 1, into orbit; in April 1961 a Soviet cosmonaut, Yuri Gagarin, became the first man in space. The Soviets maintained a strong space program until economic problems led to cutbacks in the 1980s.

Although the sciences were less rigorously censored than other fields such as art, there were several examples of suppression of ideas. In the most notorious, agronomist Trofim Lysenko refused to accept the chromosome theory of heredity usually accepted by modern genetics. Claiming his theories corresponded to Marxism, he managed to talk Joseph Stalin in 1948 into banning the practice and teaching of population genetics and several other related fields of biological research; however this decision was reversed in the 1960s. [1]

Unlike some Western countries, most of the research work in the USSR was conducted not at universities, but at specially set up research institutes. The more prestigious of them were parts of the USSR Academy of Sciences; others were within the system of specialized academies, or the research arms of various government ministries.

The core of fundamental science was the USSR Academy of Sciences, originally set up in 1925 and moved from Leningrad to Moscow in 1934. It consisted of 250 research institutes and 60,500 full-time researchers in 1987, a large percentage in the natural sciences such as biology.

All of the union's republics except the RSFSR had their own republican academies of science, while the Urals, Siberian, and Far Eastern regional branches of the academy coordinated fundamental science in Eastern Russia.

Agricultural research was organized under the aegis of the All-Union Academy of Agricultural Sciences of the Soviet Union.

A large part of research was conducted in NIIs — "scientific research institutes" ( Russian: НИИ, нау́чно-иссле́довательский институ́т). There have been a great number of NIIs, each specialized in a particular field.

Already in 1920s, certain fields of scientific research were labeled "bourgeois" and "idealist" by the Communist Party. All research, including natural sciences, was to be founded on the philosophy of dialectical materialism. Humanities and social sciences were additionally tested for strict accordance with historical materialism. [2]

After World War II, many scientists were forbidden from cooperation with foreign researchers. The scientific community of the Soviet Union became increasingly closed. In addition to that, the party continued declaring various new theories "pseudo-scientific". Genetics, pedology and psychotechnics were already banned in 1936 by a special decree of the Central Committee. On August 7, 1948, the V.I. Lenin Academy of Agricultural Sciences announced that from that point on Lamarckian inheritance, the theory that personality traits acquired during life are passed on to offspring, would be taught as "the only correct theory". Soviet scientists were forced to redact prior work, and even after this ideology, known as Lysenkoism, was demonstrated to be false, it took many years for criticism of it to become acceptable. [3] After the 1960s, during the Khrushchev Thaw, a policy of liberalization of science was implemented. Lysenkoism was officially renounced in 1963.

The following Soviet scientists were recipients of a Nobel Prize.

The most prestigious government prize awarded for achievements in science and technology was originally the Stalin Prize. After the death of Stalin, Stalin Prize was renamed the USSR State Prize, and the new Lenin Prize became the top award.