Science and technology in Turkey Information

From Wikipedia
https://en.wikipedia.org/wiki/Science_and_technology_in_Turkey
Overview of science and technology in Turkey

Science and technology in Turkey is centrally planned by TÜBİTAK and in responsibility of universities and research institutes. Research and development activities in Turkey show a significant jump in recent years. [1] Turkey was ranked 41st in the Global Innovation Index in 2021, and has increased its ranking considerably since 2011, where it was ranked 65th. [2] [3] [4]

The madrasah education institution, which first originated during the Seljuk period, reached its highest point during the Ottoman reign. [5]

Education of Ottoman Women in Medicine

Harems were places within a Sultan's palace where his wives, daughters, and female slaves were expected to stay. However, accounts of teaching young girls and boys here have been recorded. Most education of women in the Ottoman Empire was focused on teaching the women to be good house wives and social etiquette. [6] Although the formal education of women was not popular, female physicians and surgeons were still accounted for. Female physicians were given an informal education instead of a formal one. [7] However, the first properly trained female Turkish physician was Safiye Ali. Ali studied medicine in Germany and opened her own practice in Istanbul in 1922, 1 year before the fall of the Ottoman Empire.

Istanbul Technical University has a history that began in 1773. It was founded by Sultan Mustafa III as the Imperial Naval Engineers' School (original name: Mühendishane-i Bahr-i Humayun), and it was originally dedicated to the training of ship builders and cartographers. In 1795 the scope of the school was broadened to train technical military staff to modernize the Ottoman army to match the European standards. In 1845 the engineering department of the school was further developed with the addition of a program devoted to the training of architects. The scope and name of the school were extended and changed again in 1883 and in 1909 the school became a public engineering school which was aimed at training civil engineers who could create new infrastructure to develop the empire. [8]

Main article: Timeline of science and technology in the Islamic world

In 2017, business-funded research and development (R&D) exceeded that funded by the government and higher education sectors combined, for the first time, although most business-funded investment goes towards military and dual-use technologies. For instance, the leading Turkish firm for the number of patents is the principal military industry conglomerate Aselsan; it owns 54% of all resident patents, compared to just 17% for the leading patent-owner in Israel, Teva Pharmaceuticals. [9]

The Turkish Exporters Assembly has reported that defence and aerospace was the leading sector in terms of export growth in the first five months of 2019, according to a press release by the Anatolia Agency on 5 June 2019. [9]

A growing share of business-funded R&D is being driven by tax incentives, the sectoral composition of which is determined by the government. However, this trend mainly concerns innovation in manufacturing, which is open to competition largely thanks to the Customs Union with the EU in effect since 1996. [9]

The prevailing sentiment in academic circles, however, is that there is a mismatch between the level of public support for innovation and the amount of innovation in the economy. This sentiment is shared by Prof. Hasan Mandal, the head of T.BITAK, who notes the insufficiency and lack of focus of public support given to development ‘from prototypes to production’. He admits that there has been an ‘insufficient connection of R&D efforts to the needs of final consumers and needs analyses'. [10] [9]

More importantly, firms in the services and construction sectors, which accounted for 63.5% of GDP in 2018, remain largely shielded from competition. Even those that treat innovation as an afterthought remain profitable. They can afford to ignore the government’s support programmes for R&D and manufacturing-focused innovation. [9]

The low returns that researchers can expect for their efforts are impeding the development of the national innovation system. Although patent applications by Turkish inventors have been growing, as have granted patents, available evidence suggests that inventive activity in Turkey is largely disconnected from global collaboration networks. [9]

For the first time since 2002, scientific output declined by 5.2% between 2016 and 2018. Publications continue to exhibit low international co-authorship and citation rates. [9]

However, the unemployment rate among university graduates increased from 10.3% in 2008 to 12.7% in 2017. Just 2% of university entrants study natural sciences or mathematics, statistics and computer science in Turkey, compared to an average of 6% and 5%, respectively, in other OECD countries. [11] [9]

The pursuit of science and innovation in Turkey continues to be a largely government-driven endeavour. The heavy focus on defence-related capabilities is not likely to generate a significant spillover to the rest of the economy. [9] 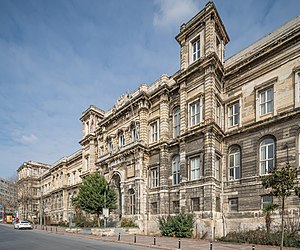 There are seven universities in Turkey which are dedicated to engineering, technology and sciences.