Science and technology in Indonesia Information

From Wikipedia
https://en.wikipedia.org/wiki/Science_and_technology_in_Indonesia
Overview of science and technology in Indonesia

The CASA/IPTN CN-235 is a medium-range twin-engined transport plane that was jointly developed by CASA of Spain and IPTN of Indonesia as a regional airliner and military transport. 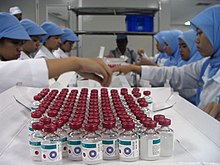 Indonesia may not be considered one of the leading countries in science and technology developments. However, there are numerous examples of notable scientific and technological innovation, developments and achievements contributed by Indonesians. Despite being a developing country, Indonesia is one of a handful nations that have developed their own aerospace technology. [1] 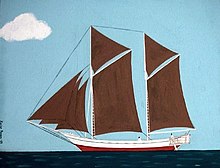 Drawing of a Pinisi-rigged lamba.

Living in an agrarian and maritime culture, the people of the Indonesian archipelago have become well known in some traditional technologies, particularly in agriculture and marine. In agriculture for instance, the people in Indonesia and many other Southeast Asian countries, are famous for paddy cultivation and techniques such as terracing. Local systems of complex irrigation and water management have been developed in the archipelagos. An exceptional example is Subak, the irrigation system of Bali.

The Austronesian people from Nusantara is already accomplished sailor since at least 1500 years B.C. During that era the distribution of kapur Barus already reached ancient Egypt. [5]: 1

The Konjo, Ara and Lemo-Lemo people from the island of Sulawesi in eastern Indonesia are also well known for their shipbuilding technology. They are renowned for making a wooden sailing vessel called the palari, using a sail system ( rigging) known as pinisi. [10] It is a common misunderstanding that the Buginese, Makassar, and Bira people built these vessels, in reality they are just sail them, not the builder. [11]

The Javanese and Malay people, like other Austronesian ethnicities, use a solid navigation system: Orientation at sea is carried out using a variety of different natural signs, and by using a very distinctive astronomy technique called " star path navigation". Basically, the navigators determine the bow of the ship to the islands that are recognized by using the position of rising and setting of certain stars above the horizon. [12]: 10  In the Majapahit era, compasses and magnets were used, and cartography (mapping science) was developed: The use of maps full of longitudinal and transverse lines, rhumb lines, and direct route lines traveled by ships were recorded by Europeans, to the point that the Portuguese considered the Javanese maps to be the best maps in the early 1500s. [13]: 249  [14]: lxxix  [5]: 163–164, 166–168  [15]

In architecture, native Indonesians have developed their own vernacular architecture. Some examples of architecturally significant Indonesian buildings are Rumah Gadang of Minangkabau, Tongkonan of Toraja, and omo sebua of Nias. The Omo Sebua is noted for its sturdy yet flexible design which allows it to resist earthquake.

Half cross-section of Borobudur

By the 8th century, the Javanese kingdom of Medang Mataram developed an advanced stone mason architectural technology in candi (temple) building. This includes the magnificent Borobudur temple, Prambanan temple, and many other temples. Architectural techniques that have been developed include knobs, indentations and dovetails used to form joints between stones and bind them without mortar. Other significant architectural advancements include: the roof, niches, and arched gateways constructed in the corbelling method. 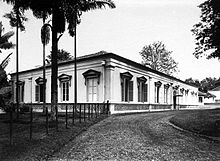 The scientific quest and systematic research in accordance to the modern scientific method began to develop and flourish in Indonesia during the Dutch East Indies period, started in the 19th century. The Dutch East Indies has attracted intellectuals, scientists and researchers. Some notable scientists that conducted most of their important research in the East Indies archipelago are Teijsmann, Junghuhn, Eijkman, Dubois and Wallace. Many important art, culture and science institutions were established in Dutch East Indies. For example, the Bataviaasch Genootschap van Kunsten en Wetenschappen, ( Royal Batavian Society of Arts and Sciences), the predecessor of the National Museum of Indonesia, was established in 1778 with the aim to promote research and publish findings in the field of arts and sciences, especially history, archaeology, ethnography and physics. The Bogor Botanical Gardens with Herbarium Bogoriense and Museum Zoologicum Bogoriense was a major centre for botanical research established in 1817, with the aim to study the flora and fauna of the archipelago.

Java Man was discovered by Eugène Dubois in 1891. The Komodo dragon was first described by Peter Ouwens in 1912, after an aeroplane crash accident in 1911 and rumors about living dinosaurs in Komodo Island in 1910. Vitamin B1 and its relation to beriberi disease was discovered by Eijkman during his work in the Indies. 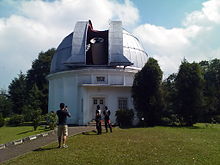 Bosscha Observatory built in 1923, today is operated by Bandung Institute of Technology

With growing interest in scientific research, the government of the Dutch East Indies established Natuurwetenschappelijke Raad voor Nederlandsch-Indië (Scientific Council of the Dutch East Indies) in 1928. It operates as the country's main research organization until the outbreak of Pacific War in 1942. In 1948 the institute was renamed Organisatie voor Natuurwetenschappelijk Onderzoek (OPIPA, Organization for Scientific Research).

After the independence of Indonesia, the government continued to nurture the scientific development and pursuit, through government institutions. In 1956 the OPIPA was nationalized as Majelis Ilmu Pengetahuan Indonesia (MIPI, Indonesian Sciences Council). Then in 1962 the government established the Departemen Urusan Riset Nasional (DURENAS, National Research Affairs Department), while MIPI are in charge of founding and operates various National Research Institutes. And in 1966 the government changed the status of DURENAS into Lembaga Riset Nasional (LEMRENAS) (National Research Institute). In August 1967 the government dissolved LEMRENAS and MIPI and established the current Indonesian Institute of Sciences (LIPI), which runs the scientific efforts and operations that was previously conducted by LEMRENAS and MIPI. [16]

On 2021, Indonesia experienced reform in science and technology field with formation of Ministry of Education, Culture, Research, and Technology and National Research and Innovation Agency as part of the government plan in consolidating science and research resources. [18] [19] [20]

Among the main research and development institutions in the country, are:

Indonesia has many universities. Among the most renowned are the University of Indonesia, the Bandung Institute of Technology and Gadjah Mada University, which offer science courses. [21] Indonesia was ranked 87th in the Global Innovation Index in 2021. [22] [23] [24] [25]

In October 1994, the State created the Biotechnology Consortium (IBC) whose aim is to develop and use the contributions of biotechnology for the benefit of the population, the country, and the conservation of the environment. Around 34 government institutions work in the biotechnology sector. In 2005, the country hosted the BINASIA-Indonesia National Workshop to promote investment in this sector.

Indonesians has developed a long tradition of fermentation technique, among others are tempeh, oncom, tuak, brem and tapai.

Indonesians have also made various advances in food technology, due to the tropical climate in Indonesia teeming with various microbes. Indonesians have developed traditional knowledge in fermentation techniques, which resulted in the development of fermented foods such as tempeh, oncom, tapai, and also beverages like brem and tuak. Tempeh is made through natural culturing and a controlled fermentation process, which employs the fungi Rhizopus oligosporus or Rhizopus oryzae, [26] The fungi binds soybeans into a cake form. It has higher content of protein, dietary fiber, and vitamins. [27]

Elevated toll road on Jalan Ahmad Yani by pass, Jakarta, which employed the Sosrobahu construction technique that rotates the beam-supporting bar on each pylon.

There are some notable technological developments made by natives in modern Indonesia (post independence). In the 1980s, Tjokorda Raka Sukawati, an Indonesian engineer, invented a road construction technique called Sosrobahu. It became popular afterwards and has since been widely used by many countries. The Sosrobahu technique allows long stretches of flyovers to be constructed above existing main roads, therefore minimizes disruptions to the heavy traffic. It involves the construction of horizontal supports for the highway beside the existing road, which is then lifted and turned at a 90 degree angle before being placed on the top of the vertical supports. This forms the flyover pylons. The technology was exported to the Philippines, Malaysia, Thailand and Singapore. In 1995, a patent was granted to Indonesia. [28]

The Cakar ayam construction, or literally means "chicken claw construction" is a technical engineering to create a more stable foundation by employing concrete plate supported by pipes planted deep into the ground acted as "claws", invented by Prof. Dr. Ir. Sedijatmo in 1961. The technique can be applied on structures, roads and runways. The technical principle consist of a concrete plate foundation is supported and secured to the ground by pipes as "claws", which allows a more stable construction, enable to build structure on soft wet ground such as on swamps. The technique allowed the structure to be more rigid, stable and more durable against uneven weight distribution or uneven land declining. [29]

Indonesia has a long history in developing military and small commuter aircraft. In fact, it is the only country in Southeast Asia to produce and develop its own aircraft. Its state-owned aircraft company (founded in 1976), Indonesian Aerospace ( Indonesian: PT. Dirgantara Indonesia) has also produced aircraft components for Boeing and Airbus. Indonesian Aerospace, together with EADS CASA of Spain, also developed the CN-235 aircraft, which has been exported to many countries. B. J. Habibie, a former Indonesian president, played an important role in this achievement. While active as a professor in Germany, Habibie conducted many research assignments, producing theories on thermodynamics, constructions, and aerodynamics, known as the Habibie Factor, Habibie Theorem, and Habibie Method respectively. [30] Indonesia also hopes to manufacture the South Korean KAI KF-X fighter. [31] The latest development is N-219, a twin-engine 19-seater commuter airplane. [1]

Furthermore, Indonesia has a well-established railway industry with its state-owned train manufacturing company, the Indonesian Railway Industry ( Indonesian: PT. Industri Kereta Api), located in Madiun, East Java. Since 1982, the company has been producing passenger train wagons, freight wagons and other railway technologies which it has exported to many countries such as Malaysia and Bangladesh. [33]

Indonesia has become a hub for disruptive technology in the logistics sector. Mobile app-based companies like GoTo have had a large impact on the way parcel, goods, and freight are transported around the country. Logisitcs technology adoption in the country has been substantial with GoTo reporting 100 million [34] monthly active users across its multiple service lines including transportation services for passengers, food, parcels, goods, and freight.

Indonesia was one of few countries during the 1970s to own their own communication satellite. Since 1976, a series of satellites named Palapa were built and launched in the United States for Indonesia's state-owned telecommunication company, Indosat. LAPAN, Indonesia's space agency, has expressed a desire to put satellites in orbit with native launch vehicles by 2040. [35]

In 2010s digital economy began to develop and continue to thrive in Indonesia. Notable example include Gojek; started in 2010 as a call center to connect consumers to courier delivery and two-wheeled ride-hailing services. Today, it grow into a Southeast Asian on-demand multi-service platform and digital payment technology group. [37] Another digital economy and service developed in Indonesia includes online marketplaces such as Tokopedia and Blibli.

Indonesian students have a good record of winning many international competitions in science and technology. In 2009, the robotics team from Indonesian Computer University won the gold medal in the “open fire-fighting autonomous robot” category at the Robogames in San Francisco, United States. [38] In 2010, they successfully defended their title. Two years earlier, another robotics team from the Tenth of November Institute of Technology won third place in Robocon 2008, a robotics contest hosted by the Asia-Pacific Broadcast Union (ABU) in Pune, India. [39]

Habibie's memorial in Gorontalo, he is remembered as the prominent figure in Indonesian science and technology, especially in aeronautics sector.