From Wikipedia
https://en.wikipedia.org/wiki/Saliva
This article is about the substance produced in the mouth. For other uses, see Saliva (disambiguation).
Not to be confused with Salvia.
Bodily fluid secreted by salivary glands

Saliva on a baby's lips

Saliva (commonly referred to as spit) is an extracellular fluid produced and secreted by salivary glands in the mouth. In humans, saliva is around 99% water, plus electrolytes, mucus, white blood cells, epithelial cells (from which DNA can be extracted), enzymes (such as lipase and amylase), antimicrobial agents (such as secretory IgA, and lysozymes). [1]

The enzymes found in saliva are essential in beginning the process of digestion of dietary starches and fats. These enzymes also play a role in breaking down food particles entrapped within dental crevices, thus protecting teeth from bacterial decay. [2] Saliva also performs a lubricating function, wetting food and permitting the initiation of swallowing, and protecting the oral mucosa from drying out. [3]

Various animal species have special uses for saliva that go beyond predigestion. Some swifts use their gummy saliva to build nests. Aerodramus nests form the basis of bird's nest soup. [4] Cobras, vipers, and certain other members of the venom clade hunt with venomous saliva injected by fangs. Some caterpillars produce silk fiber from silk proteins stored in modified salivary glands (which are unrelated to the vertebrate ones). [5]

Experts debate the amount of saliva that a healthy person produces. Production is estimated at 1500ml per day and researchers generally accept that during sleep the amount drops significantly. [3] [8] In humans, the submandibular gland contributes around 70 to 75% of secretions, while the parotid gland secretes about 20 to 25%; small amounts are secreted from the other salivary glands. [9]

Saliva contributes to the digestion of food and to the maintenance of oral hygiene. Without normal salivary function the frequency of dental caries, gum disease ( gingivitis and periodontitis), and other oral problems increases significantly.[ citation needed] Saliva limits the growth of bacterial pathogens and is a major factor in sustaining systemic and oral health through the prevention of tooth decay and the removal of sugars and other food sources for microbes. [10]

Saliva coats the oral mucosa mechanically protecting it from trauma during eating, swallowing, and speaking. Mouth soreness is very common in people with reduced saliva ( xerostomia) and food (especially dry food) sticks to the inside of the mouth.

The digestive functions of saliva include moistening food and helping to create a food bolus. The lubricative function of saliva allows the food bolus to be passed easily from the mouth into the esophagus. Saliva contains the enzyme amylase, also called ptyalin, which is capable of breaking down starch into simpler sugars such as maltose and dextrin that can be further broken down in the small intestine. About 30% of starch digestion takes place in the mouth cavity. Salivary glands also secrete salivary lipase (a more potent form of lipase) to begin fat digestion. Salivary lipase plays a large role in fat digestion in newborn infants as their pancreatic lipase still needs some time to develop. [11]

Saliva is very important in the sense of taste. It is the liquid medium in which chemicals are carried to taste receptor cells (mostly associated with lingual papillae). People with little saliva often complain of dysgeusia (i.e. disordered taste, e.g. reduced ability to taste, or having a bad, metallic taste at all times). A rare condition identified to affect taste is that of 'Saliva Hypernatrium', or excessive amounts of sodium in saliva that is not caused by any other condition (e.g., Sjögren syndrome), causing everything to taste 'salty'.

The production of saliva is stimulated both by the sympathetic nervous system and the parasympathetic. [15]

Parasympathetic stimulation leads to acetylcholine (ACh) release onto the salivary acinar cells. ACh binds to muscarinic receptors, specifically M3, and causes an increased intracellular calcium ion concentration (through the IP3/DAG second messenger system). Increased calcium causes vesicles within the cells to fuse with the apical cell membrane leading to secretion. ACh also causes the salivary gland to release kallikrein, an enzyme that converts kininogen to lysyl-bradykinin. Lysyl-bradykinin acts upon blood vessels and capillaries of the salivary gland to generate vasodilation and increased capillary permeability, respectively. The resulting increased blood flow to the acini allows the production of more saliva. In addition, Substance P can bind to Tachykinin NK-1 receptors leading to increased intracellular calcium concentrations and subsequently increased saliva secretion. Lastly, both parasympathetic and sympathetic nervous stimulation can lead to myoepithelium contraction which causes the expulsion of secretions from the secretory acinus into the ducts and eventually to the oral cavity. 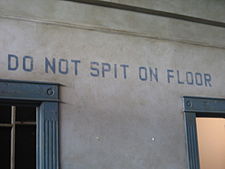 A building being renovated in the Carrollton section of New Orleans

Spitting is the act of forcibly ejecting saliva or other substances from the mouth. In many parts of the world, it is considered rude and a social taboo, and has even been outlawed in many countries. In Western countries, for example, it has often been outlawed for reasons of public decency and attempting to reduce the spread of disease; however, these laws are often not strictly enforced.[ citation needed] In Singapore, the fine for spitting may be as high as SGD$2,000 for multiple offenses, and one can even be arrested. In some other parts of the world, such as in China, expectoration is more socially acceptable (even if officially disapproved of or illegal), and spittoons are still a common appearance in some cultures. Some animals, even humans in some cases, use spitting as an automatic defensive maneuver. Camels are well known for doing this, though most domestic camels are trained not to.

Because saliva can contain large amounts of virus copies in infected individuals (for example, in people infected with SARS-CoV-2), [16] spitting in public places can pose a health hazard to the public.

Many birds in the swift family, Apodidae, produce a viscous saliva during nesting season to glue together materials to construct a nest. [17] Two species of swifts in the genus Aerodramus build their nests using only their saliva, the base for bird's nest soup. [18]

A common belief is that saliva contained in the mouth has natural disinfectants, which leads people to believe it is beneficial to " lick their wounds". Researchers at the University of Florida at Gainesville have discovered a protein called nerve growth factor (NGF) in the saliva of mice. Wounds doused with NGF healed twice as fast as untreated and unlicked wounds; therefore, saliva can help to heal wounds in some species. NGF has not been found in human saliva; however, researchers find human saliva contains such antibacterial agents as secretory mucin, IgA, lactoferrin, lysozyme and peroxidase. [19] [20] It has not been shown that human licking of wounds disinfects them, but licking is likely to help clean the wound by removing larger contaminants such as dirt and may help to directly remove infective bodies by brushing them away. Therefore, licking would be a way of wiping off pathogens, useful if clean water is not available to the animal or person.

In Pavlov's experiment, dogs were conditioned to salivate in response to a ringing bell, this stimulus is associated with a meal or hunger. Salivary secretion is also associated with nausea. Saliva is usually formed in the mouth through an act called gleeking, which can be voluntary or involuntary.

Some old cultures chewed grains to produce alcoholic beverages, such as chicha, [21] kasiri or sake.