The N. A. Rimsky-Korsakov Saint Petersburg State Conservatory ( Russian: Санкт-Петербургская государственная консерватория имени Н. А. Римского-Корсакова), also known as the Leningrad Conservatory, is a school of music in Saint Petersburg, Russia. In 2004, the conservatory had around 275 faculty members and 1,400 students. 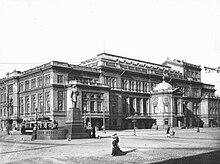 Theatre Square and the conservatory, as seen in 1913

The conservatory was founded in 1862 by the Russian Music Society and Anton Rubinstein, a Russian pianist and composer. [1] On his resignation in 1867, he was succeeded by Nikolai Zaremba. Nikolai Rimsky-Korsakov was appointed as a professor in 1871, and the conservatory has borne his name since 1944. [1] In 1887, Rubinstein returned to the conservatory with the goal of improving overall standards. He revised the curriculum, expelled inferior students, fired and demoted many professors, and made entrance and examination requirements more stringent. In 1891, he resigned again over the Imperial demand of racial quotas.

The school alumni have included such notable composers as Pyotr Ilyich Tchaikovsky, Sergei Prokofiev, Artur Kapp, and Rudolf Tobias and Dmitri Shostakovich, who taught at the conservatory during the 1960s. Amongst his pupils were German Okunev and Boris Tishchenko.

Composer Nikolai Rimsky-Korsakov taught at the conservatory for almost forty years, and his bronze monument is located outside the building in Theatre Square.

The youngest musician ever admitted to the conservatory was four-year-old violinist Clara Rockmore, who later became one of the world's foremost theremin players.