From Wikipedia, the free encyclopedia
Astronomical database
For other uses, see Simbad (disambiguation). 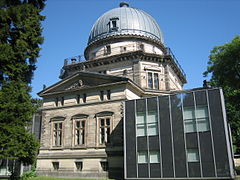 The Observatory of Strasbourg

SIMBAD (the Set of Identifications, Measurements and Bibliography for Astronomical Data) is an astronomical database of objects beyond the Solar System. It is maintained by the Centre de données astronomiques de Strasbourg (CDS), France.

SIMBAD was created by merging the Catalog of Stellar Identifications (CSI) and the Bibliographic Star Index as they existed at the Meudon Computer Centre until 1979, and then expanded by additional source data from other catalogues and the academic literature. The first on-line interactive version, known as Version 2, was made available in 1981. [1] Version 3, developed in the C language and running on UNIX stations at the Volgograd Observatory, was released in 1990. Fall of 2006 saw the release of Version 4 of the database, now stored in PostgreSQL, and the supporting software, now written entirely in Java. [2] [3]

JP11 is a star catalogue containing about 4,000 objects. Currently it exists only as a part of the SIMBAD database.[ citation needed]