Russell Wendell Simmons (born October 4, 1957) is an American entrepreneur, record executive, a four-time best-selling author and activist whose career has been known in the worlds of music, film, television, fashion, comedy, poetry, theatre, and finance. He co-founded the hip-hop label Def Jam Recordings, [1] and created the clothing fashion lines Phat Farm, Argyleculture, and Tantris. Simmons' net worth was estimated at $340 million in 2011. [2]

After producing or managing artists such as Kurtis Blow, Run DMC, Whodini, and Jimmy Spicer, Simmons joined forces with producer Rick Rubin to found Def Jam Recordings. Under Simmons‘ leadership as Chairman, Def Jam signed acts including the Beastie Boys, Public Enemy, LL Cool J, Jay Z, DMX, and Kanye West. His notable books about healthy lifestyle and entrepreneurship are Success Through Stillness, [3] Do you! 12 Laws to Access The Power in You to Achieve Happiness and Success, [4] The Happy Vegan, [5] Super Rich: A Guide to Having it All [6] and soon to be released Eat to Live: A Post Pandemic Lifestyle. [7] Simmons also appointed as Gushcloud Studios Co-Chairman, [8] a global entertainment production company, production studios, and talent management firm. Operating in 11 East Asian countries with key offices in Los Angeles, California.

Simmons has been living in Bali for five years. According to Simmons, Ubud, Bali looks like "yoga and vegan Disneyland". Simmons has lived life as a vegetarian for nearly 20 years. Simmons promotes a plant-based diet and a yogic lifestyle.

Russell Wendell Simmons was born in the Hollis neighborhood of New York City's Queens borough on October 4, 1957. [9] [10] His father was a public school administrator and his mother was a park administrator for the New York City Parks and Recreation Department. His brothers are painter Daniel Simmons Jr. and Joseph Simmons (better known as Rev Run of Run-DMC fame). In 1975, after graduating from August Martin High School, Simmons briefly attended the City College of New York in Harlem where he met a young DJ/Bboy, Kurt Walker, who influenced him to participate in the hip hop phenomenon. [11] [12] [13] [14] [15] Upon hearing Eddie Cheeba perform in Harlem in 1977, Simmons knew that hip hop would be his career. [16] Simmons stated, "Hearing Cheeba in '77 made me feel like I had just witnessed the invention of the wheel." [16] 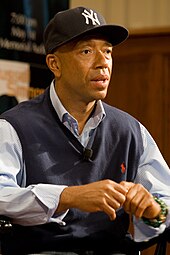 Simmons co-founded Def Jam in 1984 with Rick Rubin, who sold his share of the company for $120 million to Universal Music Group in 1996. In 1985, Simmons co-produced and appeared in the film Krush Groove. [17] Simmons' company, Rush Communications Inc., includes over ten businesses and three non-profits. Simmons, with his partner Stan Lathan, has also produced television hits HBO's Def Comedy Jam and Def Poetry Jam, and currently has a development deal with HBO. [1] [18] In 1996, Simmons co-produced the hit film The Nutty Professor, starring Eddie Murphy. In 1997, Simmons co-produced the film Def Jam's How to Be a Player, starring Bill Bellamy. [19] In 2003, Simmons co-founded RushCard, a prepaid debit card provider. [20] [21]

Simmons and his brothers founded the Rush Philanthropic Arts Foundation in 1995. The purpose of the Foundation is to provide art education and support to under-serviced youth by helping people of color access the arts and by providing exhibition opportunities. The Foundation serves about 3,000 students annually and maintains two galleries. The Rush Arts Gallery in Chelsea, Manhattan and the Corridor Gallery in Clinton Hill, Brooklyn exhibit the work of more than 100 community and emerging artists. [24]

In 2014, Claremont Lincoln University awarded Simmons an Honorary Doctorate Degree in Humane Letters for his work as chairman of the Foundation for Ethnic Understanding and for promoting mindfulness, compassion and interreligious collaboration in the public sphere. [25]

In October 2021, Simmons released a NFT collection titled, "Masters of Hip Hop". [26] It centered on driving forces in the hip hop music industry and was curated by Snoop Dogg. [27]

Simmons has been a vegan since 1999, and describes himself as a Christian yogi with a love and respect for all religions. [1] [30] He practices Jivamukti Yoga, [31] which encourages vegetarianism and social and environmental activism. He is also a practitioner of Transcendental Meditation (TM) [32] and a supporter of the David Lynch Foundation for Consciousness-Based Education and World Peace, which was established to ensure that any child in America who wants to learn and practice TM can do so. [33]

Simmons is an advocate of Ahimsa and veganism, citing animal rights along with the environmental and health benefits. [1] He said he went vegan after watching the film Diet for a New America in the 1990s. [34] He is a supporter of Farm Sanctuary, an organization working to end cruelty to farm animals. [35] People for the Ethical Treatment of Animals awarded him the 2001 PETA Humanitarian Award and the 2011 Person of the Year Award. [36] [37]

In 2009, Simmons organized thousands of protestors and hip hop celebrities in front of City Hall demanding change of the harsh sentencing of the Rockefeller Drug Laws. [38]

Simmons became chairman of the board of the Foundation for Ethnic Understanding in 2002. [39] In May 2009, he was appointed Goodwill Ambassador for the UN Slavery Memorial at the United Nations to honor the victims of slavery and the transatlantic slave trade by UN Secretary-General Ban Ki-moon. [40] In a similar vein, Simmons is a supporter of the Somaly Mam Foundation, [41] and was honored at their 2011 gala dinner. [42] Simmons officially endorses the second Muslim Jewish Conference 2011. Together with Rabbi Marc Schneier he served as the official patron of the conference held July 2011 in Kyiv, Ukraine. In 2011, he took part in the Occupy Wall Street protests, visiting the protesters at Zuccotti Park often and for many consecutive days.

Simmons is a longtime supporter of gay rights, and he encourages marriage equality. [43] In 2011, when the retail corporation Lowe's withdrew funding from the show All-American Muslim, Simmons promised to pay the Learning Channel for any revenue lost. [44]

In 2017, Simmons was listed by UK-based company Richtopia at number 23 in the list of 200 Most Influential Social-Entrepreneurs and Philanthropists Worldwide. [47] [48]

Simmons is a senior advisor of the vegan burger brand Everything Legendary. The company closed a $6 million series A round in 2022. [49]

In August 2013, Simmons launched the controversial "Harriet Tubman Sex Tape" parody video on his YouTube channel, All Def Digital, which led to public outrage and many critics demanding an apology. The video featured an actress portraying the abolitionist Harriet Tubman (1822–1913) having sex with her slave owner with the intent of filming the act and blackmailing him to convince him to work on the Underground Railroad. [50] People from his own community, such as filmmaker Spike Lee, [51] were offended by the controversial comedy sketch. [52]

Rolling Stone published Simmons' apology for the parody in which he said:

I'm a very liberal person with thick skin. My first impression of the Harriet Tubman piece was that it was about what one of actors said in the video, that 162 years later, there's still tremendous injustice," Simmons wrote. "And with Harriet Tubman outwitting the slave master? I thought it was politically correct. Silly me. I can now understand why so many people are upset. I would never condone violence against women in any form, and for all of those I offended, I am sincerely sorry." [53]

Despite his apology in 2013, the nature of shareable digital media has allowed the comedy video to continue to circulate on YouTube and around the web. [54]

In November 2017, model Keri Claussen Khalighi accused Simmons of raping her in 1991, when she was 17. Simmons and Brett Ratner, whom Khalighi accused of watching them without intervening when she asked for his help, both deny that the encounter was non-consensual. [55]

As the allegation was covered in the press, Terry Crews accused Simmons of attempting to influence him to take back sexual assault allegations that Crews had recently brought up against film executive Adam Venit, asking that Crews "give him a pass ... ask that he be reinstated." Crews posted on his Twitter account a screenshot of the alleged e-mail he had received from Simmons. [56] [57] [58] [59]

On November 30, 2017, writer Jenny Lumet claimed that Simmons had raped her in 1991. In response, Simmons said he would step down from his positions with his businesses. [60] On the same day, HBO announced that they would be removing Simmons' name and likeness from his stand-up comedy specials starting with the December 1 episode.

On December 13, 2017, The Los Angeles Times published an investigative report in which five women accused Simmons of sexual misconduct, including another alleged rape. On the same day, The New York Times published the accounts of four other women who accused Simmons of inappropriate conduct, including three more alleged rapes. In response to the allegations, Simmons stated he "never had a sexual encounter that was not consensual or lawful. Ever." [61]

On February 9, 2018, Simmons denied the allegations to Rolling Stone, saying (in part), "I vehemently deny all the allegations made against me. They have shocked me to my core as I have never been abusive or violent in any way in my relations with women. I am blessed to have shared extraordinary relationships, whether through work or love, with many great women and I have enormous respect for the women's movement worldwide and their struggle for respect, dignity, equality and power. I am devastated by any reason I may have given to anyone to say or think of me in the ways that are currently being described. I have separated myself from my businesses and charities to not become a distraction." [62]

On April 25, 2018, Jennifer Jarosik, a filmmaker who also alleged Simmons raped her, dropped her lawsuit. The suit was dismissed with prejudice, meaning Jarosik cannot refile allegations in court. [63]

A number of women, some of whom were aged 17 at the time of the alleged incidents, have accused Simmons of sexual harassment, assault or rape:

Women who said they had been sexually harassed or assaulted (including attempted rape) by Simmons include:

Women who said they had been raped by Simmons include:

After the third assault allegation was published in a guest column by Jenny Lumet in The Hollywood Reporter in November 2017, Simmons stepped down from his roles in the label Def Jam Records, his yoga lifestyle brand, CNNMoney, and other media properties. Lumet, who is the daughter of filmmaker Sidney Lumet and the granddaughter of singer and civil rights activist Lena Horne, wrote: "As a woman of color, I cannot express how wrenching it is to write this about a successful man of color. ... I feel a pang to protect your daughters. I don't think you are inclined to protect mine." [73] [74] [75]

HBO decided to remove Russell Simmons' name from All Def Comedy, a series he created to launch and showcase emerging comedians. HBO has not removed his name from Def Comedy Jams. [76]

A documentary film about the sexual assault allegations against Simmons, On the Record, premiered at the Sundance Film Festival on January 25, 2020, and was released on HBO Max on May 27, 2020. [77] Oprah Winfrey withdrew as executive producer of the film, after having been pressured by Simmons to cancel the release, [78] eventually citing there were "inconsistencies" in Drew Dixon's story that "gave me pause." [77] Winfrey has also said, however, that she believes the women who have accused Russell Simmons of sexual assault. [79] [80]