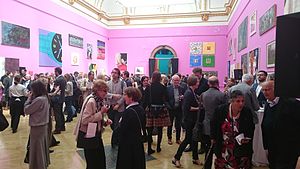 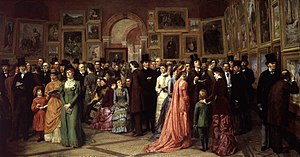 The Summer Exhibition is an open art exhibition held annually by the Royal Academy in Burlington House, Piccadilly in central London, England, during the months of June, July, and August. The exhibition includes paintings, prints, drawings, sculpture, architectural designs and models, and is the largest and most popular open exhibition in the United Kingdom. [1] It is also "the longest continuously staged exhibition of contemporary art in the world". [2]

When the Royal Academy was founded in 1768 one of its key objectives was to establish an annual exhibition, open to all artists of merit, which could be visited by the public. The first Summer Exhibition took place in 1769; it has been held every year since without exception. [1]

In 1768, a group of artists visited King George III and sought his permission to establish a society for Arts and Design. They proposed the idea of an annual exhibition and a school design. King George III approved of the idea and the first exhibition, in 1769, included 136 works. [2] The name Summer Exhibition dates from 1870. [2]

Today, around 1,000 works are selected each year from as many as 10,000 entries representing some 5,000 artists.[ citation needed] Any artist (living, known or unknown) may submit up to two works at a fee of £35 per piece for selection by The Summer Exhibition Selection and Hanging Committee.[ citation needed] Due to the significant increase in the volume of entries over recent years, the number of entries per artist was reduced to 2 (from 3) and the fee was increased £18 per piece. The committee is formed from the Council of Academicians (the governing body of the RA) and is traditionally chaired by the President of the Royal Academy. In addition to those works selected by the committee, all 80 Academicians are entitled to have six of their own pieces in the exhibition.

For the 2006 exhibition, the academy received a statue and a plinth from David Hensel. By mistake, the two parts were judged independently, with the result that the statue was rejected and the plinth put on display. [3]

Participants in the RA Summer Exhibition 2015 at St. James, Piccadilly, on Varnishing Day

The RA Summer Exhibition usually opens to the public in early June, preceded by a series of private viewings. The main event is called "Varnishing Day", the day that, according to popular legend, artists would come to add a final coat of varnish to their paintings (compare: vernissage). Traditionally, artists walk in procession from Burlington House to St James's Church, Piccadilly, where a service is held. At the opening reception the shortlists for various prizes are announced.

Almost all exhibited works are for sale; the Academy receives 30% of the purchase price. In 2003, this amounted to a sum of some £2,000,000 for the institution, which receives no financial support from the state or crown.[ citation needed]

The exhibition has received both admiration and criticism. [2] Jonathan Jones described it in 2019 as the "bloated corpse of a tradition ... [with] a tired, inward looking, end-of-the-road quality". [13]

An exhibition about the history of the Summer Exhibition, The Great Spectacle, was held in 2018. [20]