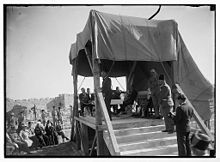 The Rockefeller Archeological Museum, [1] formerly the Palestine Archaeological Museum ("PAM"; 1938–1967), [2] [3] is an archaeology museum located in East Jerusalem [4] that houses a large collection of artifacts unearthed in the excavations conducted in Mandatory Palestine, in the 1920s and 1930s.

Prior to the establishment of the Rockefeller Museum, the British Mandate Department of Antiquities and British School of Archaeology were housed in an old building in Jerusalem with a small exhibition hall. The only other archaeological museum at the time was the Franciscan Biblical Museum, built in 1902. [6]

In 1906, the Jewish National Fund began to negotiate the purchase of Karm el-Sheikh, a tract of land facing the northeastern corner of the Old City walls, to house the Bezalel School of Art and Crafts. The founder of the school, Boris Schatz envisaged a museum and university that would overlook the Temple Mount. [7] In 1919, town planner Patrick Geddes proposed the establishment of an antiquities museum at this site. To further the project, the Mandate authorities proposed a special tourism tax in 1924. [6]

Visiting Mandatory Palestine in 1925, during the days of the British Mandate, James Henry Breasted, founder and director of the University of Chicago's Oriental Institute, recognized the need for an archaeological museum in Jerusalem to house important regional finds. [6] Encouraged by Lord Plumer, the British High Commissioner, Breasted approached American philanthropist John D. Rockefeller, Jr., who agreed to donate two million dollars toward the project. Previously, he had offered to build an archeological museum in Cairo, Egypt, [8] but he was turned down, possibly due to pressure from the British government, which was anxious to keep America from establishing a foothold in the region. 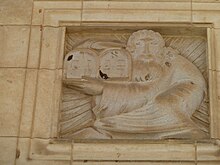 Relief representing Israelite culture, one of ten bas-reliefs by Eric Gill in the inner courtyard at the museum.

The museum was designed by Austen Harrison (Austen St. Barbe Harrison), chief architect of the Mandatory Department of Public Works, who drew up blueprints for a white limestone building integrating eastern and western architectural elements. [2] The cornerstone of the new museum was laid on June 19, 1930, but construction was delayed due to the discovery of tombs dating to the fifth century B.C. at the building site. [9] The museum features a stone bas-relief of the meeting of Asia and Africa above the main entrance together with ten stone reliefs illustrating different cultures and a gargoyle fountain in the inner courtyard carved in 1934 by the British sculptor Eric Gill (1882–1940). [10] Gill also produced stone carved signage throughout the museum in English, Hebrew, and Arabic. 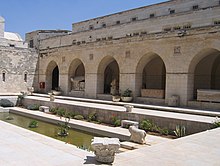 Inner courtyard with a view to the tower.

The museum opened to the public on January 13, 1938. Officially, it was called the Palestine Archaeological Museum, but was also known as the Rockefeller Museum. [2] Until the final days of the Mandate period, the museum was administered by the British Palestine Government. [11] On 1 April 1948 it was closed for the public. [12]

After the 1948 Arab–Israeli War, the museum also became a secondary headquarters of the Jordanian Department of Antiquities, headed by Gerald Lankester Harding until 1956. [14] In 1966, the museum was nationalized by King Hussein during the Jordanian annexation of the West Bank. [9]

Seven months later, when the 1967 Six-Day War broke out, the museum was captured by an Israeli paratroop brigade. [9] Its hexagonal tower was used as a lookout. Fierce fighting took place here between Israeli and Jordanian forces, culminating in an Israeli victory.[ citation needed] The Museum was then officially renamed as the Rockefeller Museum. [15]

Inside what was to have been the rear courtyard of the museum stood (until it died after nearly 300 years in 1998) one of the oldest pine trees in the country. According to Arab legend, on the site of this pine tree, Ezra the Scribe sat and wrote the Torah for Israel. [16] The stump may still be seen behind the museum.

The museum's first curator was John H. Iliffe, [17] who arranged the artifacts in chronological order, from two million years ago to 1700 AD. Among the museum's prized possessions are 8th-century wooden panels from the Jami Al-Aqsa and 12th-century ( Crusader-period) marble lintels from the Church of the Holy Sepulchre. Most of the collection consists of finds from the 1920s and 1930s. [18] On display are artifacts unearthed in Jerusalem, Megiddo, Ashkelon, Lachish, Sebastia, and Jericho. One of the Lachish letters is on permanent display at the museum, [19] as are the statuary and stucco decorations from the Umayyad Hisham's Palace.

Upon their discovery at Qumran between 1947 and 1956, the ancient Dead Sea Scrolls were housed in the Rockefeller Museum. In 1967, following the Israeli capture of East Jerusalem, the scrolls were relocated to the Shrine of the Book, a specially designed building on the grounds of the Israel Museum, in West Jerusalem, with the ownership of these scrolls having been heavily contested ever since. Part of the scrolls, including the Copper Scroll, had been taken to the Jordan Museum in Amman. [20]

Currently, the Rockefeller Museum holds thousands of artifacts ranging from prehistoric times to the Ottoman period, including a 9,000-year-old statue from Jericho (one of the oldest representations of a human figure ever found), as well as gold jewelry from the Bronze Age. [21]

The museum regularly hosts special exhibitions, such as the 2019/2021 exhibition of Armenian ceramics in Jerusalem. [22]