Mapplethorpe was born in the Floral Park neighborhood of Queens, New York, the son of Joan Dorothy (Maxey) and Harry Irving Mapplethorpe, an electrical engineer. [1] He was of English, Irish, and German descent, and grew up as a Catholic in Our Lady of the Snows Parish. Mapplethorpe attended Martin Van Buren High School, graduating in 1963. [2] He had three brothers and two sisters. One of his brothers, Edward, later worked for him as an assistant and became a photographer as well. [3] He studied for a Bachelor of Fine Arts from the Pratt Institute in Brooklyn, where he majored in Graphic Arts, [4] though he dropped out in 1969 before finishing his degree. [5] 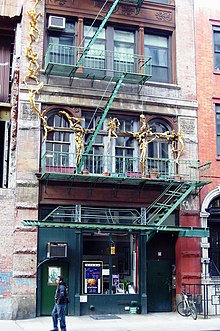 Mapplethorpe's studio at 24 Bond Street in the NoHo neighborhood of Manhattan, later kept by him for use as a darkroom

Mapplethorpe took his first photographs in the late 1960s or early 1970s using a Polaroid camera. He also designed and sold his own jewelry, which was worn by Warhol superstar Joe Dallesandro. [12] [13]

In 1972, Mapplethorpe met art curator Sam Wagstaff, who would become his mentor, lover, [14] patron, and lifetime companion. [15] In the mid-1970s, Wagstaff acquired a Hasselblad medium-format camera and Mapplethorpe began taking photographs of a wide circle of friends and acquaintances, including artists, composers, and socialites. During this time, he became friends with New Orleans artist George Dureau, whose work had such a profound impact on Mapplethorpe that he restaged many of Dureau's early photographs. From 1977 until 1980, Mapplethorpe was the lover of writer and Drummer editor Jack Fritscher, [16] who introduced him to the Mineshaft (a members-only BDSM gay leather bar and sex club in Manhattan). [17] Mapplethorpe took many pictures of the Mineshaft and was at one point its official photographer (... "After dinner I go to the Mineshaft." [18] [19] [20])

By the 1980s, Mapplethorpe's subject matter focused on statuesque male and female nudes, delicate flower still lifes, and highly formal portraits of artists and celebrities. Mapplethorpe's first studio was at 24 Bond Street in Manhattan. In the 1980s, Wagstaff bought a top-floor loft at 35 West 23rd Street for Robert, where he resided, also using it as a photo-shoot studio. [21] He kept the Bond Street loft as his darkroom. In 1988, Mapplethorpe selected Patricia Morrisroe to write his biography, which was based on more than 300 interviews with celebrities, critics, lovers, and Mapplethorpe himself. [21]

Mapplethorpe died at the age of 42 due to complications from HIV/AIDS in a Boston hospital on March 9, 1989. His body was cremated. His ashes are interred at St. John's Cemetery, Queens in New York City, at his mother's grave-site, etched "Maxey". [22]

Other subjects included flowers, especially orchids and calla lilies, children, statues, and celebrities and other artists, including Andy Warhol, Louise Bourgeois, Deborah Harry, Kathy Acker, Richard Gere, Peter Gabriel, Grace Jones, Amanda Lear, Laurie Anderson, Iggy Pop, Philip Glass, David Hockney, Cindy Sherman, Joan Armatrading, and Patti Smith. Smith was a longtime roommate of Mapplethorpe and a frequent subject in his photography, including a stark, iconic photograph that appears on the cover of Smith's first album, Horses. [32] His work often made reference to religious or classical imagery, such as a 1975 portrait of Patti Smith [33] from 1986 which recalls Albrecht Dürer's 1500 self-portrait. Between 1980 and 1983, Mapplethorpe created over 150 photographs of bodybuilder Lisa Lyon, culminating in the 1983 photobook Lady, Lisa Lyon, published by Viking Press and with text by Bruce Chatwin.

Robert took areas of dark human consent and made them into art. He worked without apology, investing the homosexual with grandeur, masculinity, and enviable nobility. Without affectation, he created a presence that was wholly male without sacrificing feminine grace. He was not looking to make a political statement or an announcement of his evolving sexual persuasion. He was presenting something new, something not seen or explored as he saw and explored it. Robert sought to elevate aspects of male experience, to imbue homosexuality with mysticism. As Cocteau said of a Genet poem, "His obscenity is never obscene."

In the summer of 1989, a traveling solo exhibit by Mapplethorpe brought national attention to the issues of public funding for the arts, as well as questions of censorship and the obscene. The Corcoran Gallery of Art in Washington, D.C., had agreed to be one of the host museums for the tour. Mapplethorpe decided to show his latest series that he explored shortly before his death. Titled Robert Mapplethorpe: The Perfect Moment, the show included photographs from his X Portfolio, which featured images of urophagia, gay BDSM and a self-portrait with a bullwhip inserted in his anus. [35] It also featured photos of two children with exposed genitals. [36] [37] The show was curated by Janet Kardon of the Institute of Contemporary Art (ICA). [38] [39] The ICA was awarded a grant from the National Endowment for the Arts to support Mapplethorpe's exhibit at the Corcoran Gallery of Art. The Corcoran cancelled the show, terminating its contract with the ICA, because it did not want to get involved in the political issues that it raised, but instead the gallery was pulled into the controversy, which "intensified the debate waged both in the media and in Congress surrounding the NEA's funding of projects perceived by some individuals...to be inappropriate." [40] The hierarchy of the Corcoran and several members of the United States Congress were upset when the works were revealed to them, due to the homoerotic and sadomasochistic themes of some of the work. Though much of his work throughout his career had been regularly displayed in publicly funded exhibitions, conservative and religious organizations such as the American Family Association seized on this exhibition to vocally oppose government support for what they called "nothing more than the sensational presentation of potentially obscene material." [41]

In June 1989, pop artist Lowell Blair Nesbitt became involved in the censorship issue. Nesbitt, a long-time friend of Mapplethorpe, revealed that he had a $1.5-million bequest to the museum in his will, but publicly promised that if the museum refused to host the exhibition, he would revoke the bequest. The Corcoran refused and Nesbitt bequeathed the money to the Phillips Collection instead. After the Corcoran refused the Mapplethorpe exhibition, the underwriters of the exhibition went to the nonprofit Washington Project for the Arts, [42] which showed all the images in its space from July 21 to August 13, 1989, to large crowds. [43] [44] In 1990, the Contemporary Arts Center in Cincinnati, which had also shown the exhibit, and Dennis Barrie, were charged with obscenity; photographs that depicted men in sadomasochistic poses were the basis of charges that the museum and its director had pandered obscenity. They were found not guilty by a jury. [45]

According to the ICA, "The Corcoran's decision sparked a controversial national debate: Should tax dollars support the arts? Who decides what is 'obscene' or 'offensive' in public exhibitions? And if art can be considered a form of free speech, is it a violation of the First Amendment to revoke federal funding on grounds of obscenity? To this day, these questions remain very much at issue." [38] [46] Mapplethorpe became something of a cause célèbre for both sides of the American culture war. However, prices for many of the Mapplethorpe photographs doubled and even tripled as a consequence of all the attention. The artist's notoriety supposedly also helped the posthumous sale at Christie's auction house of Mapplethorpe's own collection of furniture, pottery, silver and works by other artists, which brought about $8 million. [47]

In 1998, the University of Central England was involved in a controversy when a library book by Mapplethorpe was confiscated. A final-year undergraduate student was writing a paper on the work of Mapplethorpe and intended to illustrate the paper with a few photographs made from Mapplethorpe, a book of the photographer's work. She took the film to a local shop to be developed and the staff there informed West Midlands Police because of the unusual nature of the images. The police confiscated the library book from the student and informed the university that two photographs in the book would have to be removed. If the university agreed to the removal (which it did not) the book would be returned. The two photographs, which were deemed possibly prosecutable as obscenity, were "Helmut and Brooks, NYC, 1978", which shows anal fisting, and "Jim and Tom, Sausalito, 1977", which is of a man clad in a dog collar, a leather mask and trousers, urinating into another man's mouth." [48] [49] [50] After a delay of about six months, the affair came to an end when Peter Knight, the Vice-Chancellor of the university, was informed that no legal action would be taken. [49] [50] The book was returned to the university library without removal of the photographs. [51]

The 1986 solo exhibition "Black Males" and the subsequent book The Black Book sparked controversy for their depiction of black men. The images, erotic depictions of black men, were widely criticized for being exploitative. [52] [53] [54] The work was largely phallocentric and sculptural, focusing on segments of the subject's bodies. His purported intention with these photographs and the use of black men as models was the pursuit of the Platonic ideal. [21] Mapplethorpe's initial interest in the black male form was inspired by films like Mandingo and the interrogation scene in Cruising, in which an unknown black character enters the interrogation room and slaps the protagonist across the face. [55]

Criticism was the subject of a work by American conceptual artist Glenn Ligon, Notes on the Margins of the Black Book (1991–1993). Ligon juxtaposes Mapplethorpe's 91 images of black men in the 1988 publication Black Book with critical texts and personal reactions about the work to complicate the racial undertones of the imagery. [56]

American poet and activist Essex Hemphill also expressed criticism in his anthology Brother to Brother (1991). Although he believed that Mapplethorpe's work reflected exceptional talent, Hemphill also believed that it displayed a lack of concern for gay black men, "except as sexual subjects". [57]

In 1992, author Paul Russell dedicated his novel Boys of Life to Mapplethorpe, as well as to Karl Keller and Pier Paolo Pasolini. [58]

When Mapplethorpe: A Biography by Patricia Morrisroe was published by Random House in 1995, [21] the Washington Post Book World described it as "Mesmerizing ... Morrisroe has succeeded in re-creating the photographer's world of light and dark." [59] Art critic Arthur C. Danto, writing in The Nation, praised it as "utterly admirable ... The clarity and honesty of Morrisroe's portrait are worthy of its subject." [60]

In 1996, Patti Smith wrote a book The Coral Sea dedicated to Mapplethorpe. [61]

In September 1999, Arena Editions published Pictures, a monograph that reintroduced Mapplethorpe's sex pictures. In 2000, Pictures was seized by two South Australian plain-clothes detectives from an Adelaide bookshop in the belief that the book breached indecency and obscenity laws. [62] Police sent the book to the Canberra-based Office of Film and Literature Classification after the state Attorney-General's Department deftly decided not to get involved in the mounting publicity storm. Eventually, the OFLC board agreed unanimously that the book, imported from the United States, should remain freely available and unrestricted. [63]

In May 2007, American writer, director, and producer James Crump directed the documentary film Black White + Gray, which premiered at the 2007 Tribeca Film Festival. It explores the influence Mapplethorpe, curator Sam Wagstaff, and Patti Smith had on the 1970s art scene in New York City. [64] [65] [66] [67] [68]

In September 2007, Prestel published Mapplethorpe: Polaroids, a collection of 183 of approximately 1,500 existing Mapplethorpe polaroids. [69] This book accompanies an exhibition by the Whitney Museum of American Art in May 2008.

Patti Smith's 2010 memoir Just Kids focuses on her relationship with Mapplethorpe. [71] The book won the 2010 National Book Award for Nonfiction. [72]

The American documentary film, Mapplethorpe: Look at the Pictures, was released in 2016. It was directed and executive produced by Randy Barbato and Fenton Bailey, and produced by Katharina Otto-Bernstein. [75] [76] [77] [78] [79] [80]

In January 2016, filmmaker Ondi Timoner announced that she was directing a feature about him, Mapplethorpe, with Matt Smith in the lead role. [81] The film premiered on April 22, 2018, at the Tribeca Film Festival in New York City. [82]

In 2019 and 2020, the Guggenheim Museum in New York City hosted Implicit Tensions, an exhibition of many of Mapplethorpe's works. [83]

In collaboration with the Mapplethorpe Foundation, jeweler Gaia Repossi created a jewelry collection inspired by Mapplethorpe in 2021. [84]

In 2017, a 1987 Mapplethorpe self-portrait platinum print was auctioned for £450,000, [85] making it the most expensive Mapplethorpe photograph ever sold.