Roane County is a county of the U.S. state of Tennessee. As of the 2020 census, the population was 53,404. [2] Its county seat is Kingston. [3] Roane County is included in the Knoxville, TN Metropolitan Statistical Area.

Roane County was formed in 1801, and named for Archibald Roane, the second Governor of Tennessee. [1] Upon the creation of the Southwest Territory in 1790, the territory's governor, William Blount, initially wanted to locate the territorial capital at the mouth of the Clinch River, but was unable to obtain title to the land from the Cherokee. Kingston, Roane's county seat, is rooted in Fort Southwest Point, a frontier fort constructed in the early 1790s. [1]

During the Civil War, Roane County, like many East Tennessee counties, was largely pro-Union. When Tennessee voted on the Ordinance of Secession on June 8, 1861, Roane Countians voted 1,568 to 454 in favor of remaining in the Union. [4] In October 1861, Union guerrilla William B. Carter organized the East Tennessee bridge-burning conspiracy from a command post in Kingston. [5] During the Knoxville Campaign in December 1863, a Union force led by General James G. Spears scattered a small Confederate force led by John R. Hart near Kingston. [6]

In the years following the Civil War, Rockwood grew into a major iron and coal mining center with the establishment of the Roane Iron Company by General John T. Wilder. Iron ore and coal were mined on Walden Ridge and shipped to Rockwood, where the ore was converted into pig iron. The pig iron was then shipped to rolling mills in Knoxville or Chattanooga. [1]

K-25, site of uranium enrichment for the "Little Boy" bomb dropped on Hiroshima

During the late 19th century, northern investors established two planned cities in Roane County— Cardiff and Harriman. Cardiff, located northeast of Rockwood, was planned as a company town to support several proposed mining industries in the area. Harriman was planned as a Temperance Town. Both ventures suffered critical setbacks as a result of the Panic of 1893. Harriman survived, but never grew in the manner its planners had envisioned, while Cardiff failed altogether. [7] During World War II, the federal government created the city of Oak Ridge as a planned community as part of the Manhattan Project to develop the atomic bomb. As a result of the Project, both the K-25 gaseous diffusion plant and the Oak Ridge National Laboratory are located in the county.

Walden Ridge, with lower Roane County on the right

Roane County straddles the geographical boundary between the Tennessee Valley and the Cumberland Plateau, with the latter's Walden Ridge escarpment visible from much of the county.

The Census Bureau has defined the Harriman-Kingston-Rockwood area as a contiguous urban cluster. [17]

Several movies have been filmed in Roane County, including Boys of Summerville, That Evening Sun and October Sky. Roane County was the childhood home of actress Megan Fox, who lived in Kingston. She attended elementary school, took dance classes, and was on the swim team in Roane County. The 2010 film, Get Low, starring Bill Murray, Robert Duvall, and Sissy Spacek, was based on the true story of a Roane County man, Felix Breazeale. Breazeale was a local hermit who opted to throw himself a funeral while he was still alive. The funeral intrigued many, making it a gathering of thousands. Roane County has produced thousands of successful athletes. One of Roane County's most recent athletes is Tyler Thompson of Kingston. Thompson played Division I basketball in the Ohio Valley Conference for Tennessee Technological University. [18] 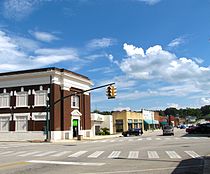