From Wikipedia
https://en.wikipedia.org/wiki/Ribonuclease
Class of enzyme that catalyzes the degradation of RNA

All organisms studied contain many RNases of two different classes, showing that RNA degradation is a very ancient and important process. As well as clearing of cellular RNA that is no longer required, RNases play key roles in the maturation of all RNA molecules, both messenger RNAs that carry genetic material for making proteins and non-coding RNAs that function in varied cellular processes. In addition, active RNA degradation systems are the first defense against RNA viruses and provide the underlying machinery for more advanced cellular immune strategies such as RNAi.

Some cells also secrete copious quantities of non-specific RNases such as A and T1. RNases are, therefore, extremely common, resulting in very short lifespans for any RNA that is not in a protected environment. It is worth noting that all intracellular RNAs are protected from RNase activity by a number of strategies including 5' end capping, 3' end polyadenylation, formation of an RNA·RNA duplex, and folding within an RNA protein complex ( ribonucleoprotein particle or RNP).

Another mechanism of protection is ribonuclease inhibitor (RI), which comprises a relatively large fraction of cellular protein (~0.1%) in some cell types, and which binds to certain ribonucleases with the highest affinity of any protein-protein interaction; the dissociation constant for the RI-RNase A complex is ~20 fM under physiological conditions. RI is used in most laboratories that study RNA to protect their samples against degradation from environmental RNases.

RNases play a critical role in many biological processes, including angiogenesis and self-incompatibility in flowering plants (angiosperms). [2] [3] Many stress-response toxins of prokaryotic toxin-antitoxin systems have been shown to have RNase activity and homology. [4] 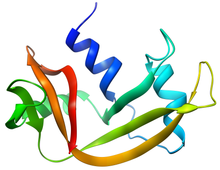 Structure of RNase A

The active site looks like a rift valley where all the active site residues create the wall and bottom of the valley. the rift is very thin and the small substrate fits perfectly in the middle of the active site, which allows for perfect interaction with the residues. It actually has a little curvature to the site which the substrate also has. Although, usually most of exo- and endoribonucleases are not sequenced specific, recently CRISPR/Cas system natively recognizing and cutting DNA was engineered to cleave ssRNA in a sequence-specific manner. [11]

The extraction of RNA in molecular biology experiments is greatly complicated by the presence of ubiquitous and hardy ribonucleases that degrade RNA samples. Certain RNases can be extremely hardy and inactivating them is difficult compared to neutralizing DNases. In addition to the cellular RNases that are released, there are several RNases that are present in the environment. RNases have evolved to have many extracellular functions in various organisms. [12] [13] [14] For example, RNase 7, a member of the RNase A superfamily, is secreted by human skin and serves as a potent antipathogen defence. [15] [16] In these secreted RNases, the enzymatic RNase activity may not even be necessary for its new, exapted function. For example, immune RNases act by destabilizing the cell membranes of bacteria. [17] [18]