From Wikipedia
https://en.wikipedia.org/wiki/Regular_number
Numbers that evenly divide powers of 60
Not to be confused with regular prime. 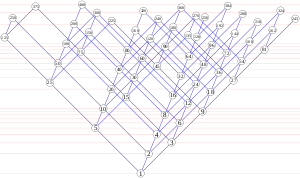 A Hasse diagram of divisibility relationships among the regular numbers up to 400. The vertical scale is logarithmic. [1]

These numbers arise in several areas of mathematics and its applications, and have different names coming from their different areas of study.

Formally, a regular number is an integer of the form

. Such a number is a divisor of

The first few regular numbers are [2]

Several other sequences at the On-Line Encyclopedia of Integer Sequences have definitions involving 5-smooth numbers. [4]

Although the regular numbers appear dense within the range from 1 to 60, they are quite sparse among the larger integers. A regular number

is less than or equal to some threshold

if and only if the point

. Therefore, the number of regular numbers that are at most

can be estimated as the volume of this tetrahedron, which is

Even more precisely, using big O notation, the number of regular numbers up to

. [2] A similar formula for the number of 3-smooth numbers up to

is given by Srinivasa Ramanujan in his first letter to G. H. Hardy. [5]

AO 6456, a table of reciprocals of regular numbers from Seleucid Uruk, copied from an unknown earlier source

In the Babylonian sexagesimal notation, the reciprocal of a regular number has a finite representation. If

, then the sexagesimal representation of

is just that for

, shifted by some number of places. This allows for easy division by these numbers: to divide by

The Babylonians used tables of reciprocals of regular numbers, some of which still survive. [7] These tables existed relatively unchanged throughout Babylonian times. [6]

Although the primary reason for preferring regular numbers to other numbers involves the finiteness of their reciprocals, some Babylonian calculations other than reciprocals also involved regular numbers. For instance, tables of regular squares have been found [6] and the broken tablet Plimpton 322 has been interpreted by Neugebauer as listing Pythagorean triples

In music theory, the just intonation of the diatonic scale involves regular numbers: the pitches in a single octave of this scale have frequencies proportional to the numbers in the sequence 24, 27, 30, 32, 36, 40, 45, 48 of nearly consecutive regular numbers. [9] Thus, for an instrument with this tuning, all pitches are regular-number harmonics of a single fundamental frequency. This scale is called a 5- limit tuning, meaning that the interval between any two pitches can be described as a product 2i3j5k of powers of the prime numbers up to 5, or equivalently as a ratio of regular numbers. [10]

5-limit musical scales other than the familiar diatonic scale of Western music have also been used, both in traditional musics of other cultures and in modern experimental music: Honingh & Bod (2005) list 31 different 5-limit scales, drawn from a larger database of musical scales. Each of these 31 scales shares with diatonic just intonation the property that all intervals are ratios of regular numbers. [10] Euler's tonnetz provides a convenient graphical representation of the pitches in any 5-limit tuning, by factoring out the octave relationships (powers of two) so that the remaining values form a planar grid. [10] Some music theorists have stated more generally that regular numbers are fundamental to tonal music itself, and that pitch ratios based on primes larger than 5 cannot be consonant. [11] However the equal temperament of modern pianos is not a 5-limit tuning, [12] and some modern composers have experimented with tunings based on primes larger than five. [13]

and each such pair defines a superparticular ratio

In the Renaissance theory of universal harmony, musical ratios were used in other applications, including the architecture of buildings. In connection with the analysis of these shared musical and architectural ratios, for instance in the achitecture of Palladio, the regular numbers have also been called the harmonic whole numbers. [15]

Algorithms for calculating the regular numbers in ascending order were popularized by Edsger Dijkstra. Dijkstra ( 1976, 1981) attributes to Hamming the problem of building the infinite ascending sequence of all 5-smooth numbers; this problem is now known as Hamming's problem, and the numbers so generated are also called the Hamming numbers. Dijkstra's ideas to compute these numbers are the following:

This algorithm is often used to demonstrate the power of a lazy functional programming language, because (implicitly) concurrent efficient implementations, using a constant number of arithmetic operations per generated value, are easily constructed as described above. Similarly efficient strict functional or imperative sequential implementations are also possible whereas explicitly concurrent generative solutions might be non-trivial. [16]

In the Python programming language, lazy functional code for generating regular numbers is used as one of the built-in tests for correctness of the language's implementation. [17]

A related problem, discussed by Knuth (1972), is to list all

-digit sexagesimal numbers in ascending order, as was done for

by Inakibit-Anu, the Seleucid-era scribe of tablet AO6456. In algorithmic terms, this is equivalent to generating (in order) the subsequence of the infinite sequence of regular numbers, ranging from

. [18] See Gingerich (1965) for an early description of computer code that generates these numbers out of order and then sorts them; [19] Knuth describes an ad hoc algorithm, which he attributes to Bruins (1970), for generating the six-digit numbers more quickly but that does not generalize in a straightforward way to larger values of

. [18] Eppstein (2007) describes an algorithm for computing tables of this type in linear time for arbitrary values of

is a regular number and is divisible by 8, the generating function of an

-dimensional extremal even unimodular lattice is an

As with other classes of smooth numbers, regular numbers are important as problem sizes in computer programs for performing the fast Fourier transform, a technique for analyzing the dominant frequencies of signals in time-varying data. For instance, the method of Temperton (1992) requires that the transform length be a regular number. [22]

Book VIII of Plato's Republic involves an allegory of marriage centered on the highly regular number 604 = 12,960,000 and its divisors (see Plato's number). Later scholars have invoked both Babylonian mathematics and music theory in an attempt to explain this passage. [23]

Certain species of bamboo release large numbers of seeds in synchrony (a process called masting) at intervals that have been estimated as regular numbers of years, with different intervals for different species, including examples with intervals of 10, 15, 16, 30, 32, 48, 60, and 120 years. [24] It has been hypothesized that the biological mechanism for timing and synchronizing this process lends itself to smooth numbers, and in particular in this case to 5-smooth numbers. Although the estimated masting intervals for some other species of bamboo are not regular numbers of years, this may be explainable as measurement error. [24]