From Wikipedia
https://en.wikipedia.org/wiki/Reducing_agent
Chemical species that donates an electron to another species in a redox reaction

In chemistry, a reducing agent (also known as a reductant, reducer, or electron donor) is a chemical species that "donates" an electron to an electron recipient (called the oxidizing agent, oxidant, oxidizer, or electron acceptor). Examples of substances that are commonly reducing agents include the Earth metals, formic acid, oxalic acid, and sulfite compounds.

In their pre-reaction states, reducers have extra electrons (that is, they are by themselves reduced) and oxidizers lack electrons (that is, they are by themselves oxidized). A reducing agent typically is in one of its lower possible oxidation states. The oxidation state, which describes the degree of loss of electrons, of the reducer increases while that of the oxidizer decreases. In a redox reaction, the agent whose oxidation state increases, that "loses/ donates electrons", that "is oxidized", and that "reduces" is called the reducer or reducing agent, while the agent whose oxidation state decreases, that "gains/ accepts/receives electrons", that "is reduced", and that "oxidizes" is called the oxidizer or oxidizing agent.

For example, consider the overall reaction for aerobic cellular respiration:

In organic chemistry, reduction usually refers to the addition of hydrogen to a molecule. For example, the oxidizing agent benzene is reduced to cyclohexane by hydrogenation:

This article is about electron-transfer, not hydrogenation.

The reducing agent in this reaction is ferrocyanide ([Fe(CN)6]4−). It donates an electron, becoming oxidized to ferricyanide ([Fe(CN)6]3−). Simultaneously, that electron is received by the oxidizer chlorine (Cl
2), which is reduced to chloride (Cl−
).

Common reducing agents include metals potassium, calcium, barium, sodium and magnesium, and also compounds that contain the H− ion, those being NaH, LiH, [3] LiAlH4 and CaH2.

Hydrogen acts as a reducing agent because it donates its electrons to fluorine, which allows fluorine to be reduced.

Reducing agents and oxidizing agents are the ones responsible for corrosion, which is the "degradation of metals as a result of electrochemical activity". [1] Corrosion requires an anode and cathode to take place. The anode is an element that loses electrons (reducing agent), thus oxidation always occurs in the anode, and the cathode is an element that gains electrons (oxidizing agent), thus reduction always occurs in the cathode. Corrosion occurs whenever there's a difference in oxidation potential. When this is present, the anode metal begins deteriorating, given there is an electrical connection and the presence of an electrolyte. 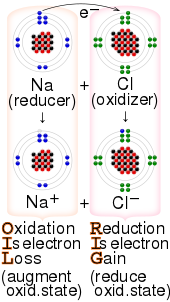 Example of a reduction–oxidation reaction between sodium and chlorine, with the OIL RIG mnemonic [4]

Historically, reduction referred to the removal of oxygen from a compound, hence the name 'reduction'. [5] An example of this phenomenon occurred during the Great Oxidation Event, in which biologically−produced molecular oxygen ( dioxygen (O2), an oxidizer and electron recipient) was added to the early Earth's atmosphere, which was originally a weakly reducing atmosphere containing reducing gases like methane (CH4) and carbon monoxide (CO) (along with other electron donors) [6] and practically no oxygen because any that was produced would react with these or other reducers (particularly with iron dissolved in sea water), resulting in their removal. By using water as a reducing agent, aquatic photosynthesizing cyanobacteria produced this molecular oxygen as a waste product. [7] This O2 initially oxidized the ocean's dissolved ferrous iron (Fe(II) − meaning iron in its +2 oxidation state) to form insoluble ferric iron oxides such as Iron(III) oxide (Fe(II) lost an electron to the oxidizer and became Fe(III) − meaning iron in its +3 oxidation state) that precipitated down to the ocean floor to form banded iron formations, thereby removing the oxygen (and the iron). The rate of production of oxygen eventually exceeded the availability of reducing materials that removed oxygen, which ultimately led Earth to gain a strongly oxidizing atmosphere containing abundant oxygen (like the modern atmosphere). [8] The modern sense of donating electrons is a generalization of this idea, acknowledging that other components can play a similar chemical role to oxygen.

The formation of iron(III) oxide;

In the above equation, the Iron (Fe) has an oxidation number of 0 before and 3+ after the reaction. For oxygen (O) the oxidation number began as 0 and decreased to 2−. These changes can be viewed as two " half-reactions" that occur concurrently: