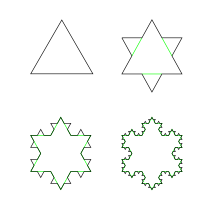 Four stages in the construction of a Koch snowflake. As with many other fractals, the stages are obtained via a recursive definition.

In mathematics and computer science, a recursive definition, or inductive definition, is used to define the elements in a set in terms of other elements in the set ( Aczel 1977:740ff). Some examples of recursively-definable objects include factorials, natural numbers, Fibonacci numbers, and the Cantor ternary set.

This definition is valid for each natural number n, because the recursion eventually reaches the base case of 0. The definition may also be thought of as giving a procedure for computing the value of the function n!, starting from n = 0 and proceeding onwards with n = 1, n = 2, n = 3 etc.

The recursion theorem states that such a definition indeed defines a function that is unique. The proof uses mathematical induction. [1]

Most recursive definitions have two foundations: a base case (basis) and an inductive clause.

In contrast, a circular definition may have no base case, and even may define the value of a function in terms of that value itself — rather than on other values of the function. Such a situation would lead to an infinite regress.

That recursive definitions are valid – meaning that a recursive definition identifies a unique function – is a theorem of set theory known as the recursion theorem, the proof of which is non-trivial. [3] Where the domain of the function is the natural numbers, sufficient conditions for the definition to be valid are that the value of f(0) (i.e., base case) is given, and that for n > 0, an algorithm is given for determining f(n) in terms of n, f(0), f(1), …, f(n − 1) (i.e., inductive clause).

Let A be a set and let a0 be an element of A. If ρ is a function which assigns to each function f mapping a nonempty section of the positive integers into A, an element of A, then there exists a unique function

Addition is defined recursively based on counting as

Multiplication is defined recursively as

Exponentiation is defined recursively as

Binomial coefficients can be defined recursively as

The even numbers can be defined as consisting of

It is chiefly in logic or computer programming that recursive definitions are found. For example, a well-formed formula (wff) can be defined as:

The value of such a recursive definition is that it can be used to determine whether any particular string of symbols is "well formed".