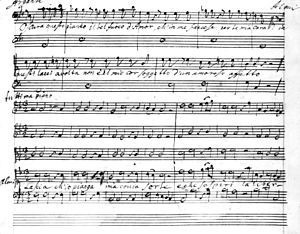 This score for Handel's Lascia ch'io pianga shows the simple accompaniment for a recitative; much of the time, the basso continuo (the lower staff in bass clef) play half notes and whole notes underneath the vocalist's recitative part.
A recitative from J.S. Bach's Cantata 140, "Wachet auf, ruft uns die Stimme".

Recitative ( /ˌrɛsɪtəˈtiːv/, also known by its Italian name "recitativo" ( [retʃitaˈtiːvo])) is a style of delivery (much used in operas, oratorios, and cantatas) in which a singer is allowed to adopt the rhythms and delivery of ordinary speech. Recitative does not repeat lines as formally composed songs do. It resembles sung ordinary speech more than a formal musical composition.

Recitative can be distinguished on a continuum from more speech-like to more musically sung, with more sustained melodic lines. The mostly syllabic recitativo secco [A] ("dry", accompanied only by continuo, typically cello and harpsichord) is at one end of the spectrum, through recitativo accompagnato (using orchestra), the more melismatic arioso, and finally the full-blown aria or ensemble, where the pulse is entirely governed by the music. Secco recitatives can be more improvisatory and free for the singer, since the accompaniment is so sparse; in contrast, when recitative is accompanied by orchestra, the singer must perform in a more structured way.

The term recitative (or occasionally liturgical recitative) is also applied to the simpler formulas of Gregorian chant, such as the tones used for the epistle, gospel, preface and collects; see accentus.

The first use of recitative in opera was preceded by the monodies of the Florentine Camerata in which Vincenzo Galilei, father of the astronomer Galileo Galilei, played an important role. The elder Galilei, influenced by his correspondence with Girolamo Mei on the writings of the ancient Greeks and with Erycius Puteanus on the writings of Hucbald [1] and wishing to recreate the old manner of storytelling and drama, pioneered the use of a single melodic line to tell the story, accompanied by simple chords from a harpsichord or lute.

In the Baroque era, recitatives were commonly rehearsed on their own by the stage director, the singers frequently supplying their own favourite baggage arias which might be by a different composer (some of Mozart's so-called concert arias fall into this category). This division of labour persisted into the 19th century: Rossini's La Cenerentola (1817, recitatives by Luca Agolini [2]) is a famous example. Later it remained a custom to replace originally spoken dialogue with new recitatives: Carl Maria von Weber's Der Freischütz (1821, adapted 1841 with recitatives by Hector Berlioz for the Paris Opera), Georges Bizet's Carmen (1875, recitatives by Ernest Guiraud for the posthumous run in Vienna the same year), Charles Gounod's Mireille and La colombe (staged by Sergei Diaghilev with recitatives respectively by Eric Satie and Francis Poulenc [3]).

Secco recitatives, popularized in Florence though the proto-opera music dramas of Jacopo Peri and Giulio Caccini during the late 16th century, formed the substance of Claudio Monteverdi's operas during the 17th century, and continued to be used into the 19th century Romantic era by such composers as Gaetano Donizetti, reappearing in Stravinsky's The Rake's Progress. They also influenced areas of music outside opera from the outset; the recitatives of Johann Sebastian Bach, found in his passions and cantatas, are especially notable.

In the early operas and cantatas of the Florentine school, secco recitatives were accompanied by a variety of instruments, mostly plucked fretted strings including the chitarrone, often with a pipe organ to provide sustained tone. Later, in the operas of Vivaldi and Händel, the accompaniment was standardised as a harpsichord and a bass viol or violoncello. When the harpsichord was gradually phased out over the late 18th century, and mostly disappeared in the early 19th century, many opera-houses did not replace it with the fortepiano, a hammered-string keyboard invented in 1700.

Instead the violoncello was left to carry on alone, or with reinforcement from a double bass. A 1919 recording of Rossini's Barber of Seville, issued by Italian HMV, gives a unique glimpse of this technique in action, as do cello methods of the period and some scores of Meyerbeer. There are examples of the revival of the harpsichord for this purpose as early as the 1890s (e.g. by Hans Richter for a production of Mozart's Don Giovanni at the London Royal Opera House, the instrument being supplied by Arnold Dolmetsch), but it was not until the 1950s that the 18th-century method was consistently observed once more. In the 2010s, the early music revival movement has led to the re-introduction of harpsichord in some Baroque performances.

Accompanied recitative, known as accompagnato or stromentato, employs the orchestra as an accompanying body. The composer writes an arrangement for the orchestra musicians. As a result, it is less improvisational and declamatory than recitativo secco, and more song-like. This form is often employed where the orchestra can underscore a particularly dramatic text, as in " Thus saith the Lord" from Händel's Messiah; Joseph Haydn and Wolfgang Amadeus Mozart were also fond of it. A more inward intensification calls for an arioso; the opening of " Comfort ye" from the same work is a famous example, while the ending of it ("The voice of him that crieth in the wilderness") is secco.

Later operas, under the influence of Richard Wagner, favored through-composition, where recitatives, arias, choruses and other elements were seamlessly interwoven into a whole. Many of Wagner's operas employ sections which are analogous to accompanied recitative.

Recitative is also occasionally used in musicals, being put to ironic use in the finale of Kurt Weill's The Threepenny Opera. It also appears in Carousel and Of Thee I Sing.

George Gershwin used it in his opera Porgy and Bess, though sometimes the recitative in that work is changed to spoken dialogue. Porgy and Bess has also been staged as a musical rather than as an opera.

Recitative has also sometimes been used to refer to parts of purely instrumental works which resemble vocal recitatives, in terms of their musical style. In an instrumental recitative, one instrument (or group of instruments) are given the melody line (akin to the role of the singer) and another instrument (or group of instruments) are given the accompaniment role. One of the earliest examples is found in the slow movement of Vivaldi's violin concerto in D, RV 208 which is marked "Recitative", although it is perhaps more virtuosic and flashy than most operatic recitative. C. P. E. Bach included instrumental recitative in his "Prussian" piano sonatas of 1742, composed at Frederick the Great's court in Berlin. In 1761, Joseph Haydn took his post at Esterhazy Palace and soon after composed his Symphony No. 7 ("Le Midi") in concertante style (i.e. with soloists). In the second movement of that work, the violinist is the soloist in an instrumental recitative.

Ludwig van Beethoven used the instrumental recitative in at least three works, including Piano Sonata No. 17 (The Tempest), Piano Sonata No. 31, and perhaps most famously in the opening section of the Finale of his Ninth Symphony. Here, Beethoven inscribed on the score (in French) "In the manner of a recitative, but in tempo." Leon Plantinga argues that the second movement of Beethoven's Fourth Piano Concerto is also an instrumental recitative, [5] although Owen Jander interprets it as a dialogue. [6]

Other Romantic music era composers to employ instrumental recitative include Nikolai Rimsky-Korsakov (who composed a lyrical, virtuosic recitative for solo violin with harp accompaniment to represent the title character in his orchestral Scheherazade) and Hector Berlioz (whose choral symphony Roméo et Juliette contains a trombone recitative as part of its Introduction).

Arnold Schoenberg labeled the last of his Five Pieces for Orchestra, Op. 16, as "Das obligate Rezitativ", and also composed a piece for organ, Variations on a Recitative, Op. 40. Other examples of instrumental recitative in twentieth century music include the third movement of Douglas Moore's Quintet for Clarinet and Strings (1946), the first of Richard Rodney Bennett's Five Impromptus for guitar (1968), the opening section of the last movement of Benjamin Britten's String Quartet No. 3 (1975), and the second of William Bolcom's 12 New Etudes for Piano (1977–86).

The tropes of recitative

There are certain conventions, or tropes, which standardize recitative; so that, in practice, recitative is a rigid musical form. The following are standard tropes of recitative: