From Wikipedia
(Redirected from RNA viruses)
https://en.wikipedia.org/wiki/RNA_viruses
Kingdom of viruses

Orthornavirae is a kingdom of viruses that have genomes made of ribonucleic acid (RNA), those genomes encoding an RNA-dependent RNA polymerase (RdRp). The RdRp is used to transcribe the viral RNA genome into messenger RNA (mRNA) and to replicate the genome. Viruses in this kingdom also share a number of characteristics involving evolution, including high rates of genetic mutations, recombinations, and reassortments.

Viruses in Orthornavirae belong to the realm Riboviria. They are descended from a common ancestor that may have been a non-viral molecule that encoded a reverse transcriptase instead of an RdRp for replication. The kingdom is subdivided into five phyla that separate member viruses based on their genome type, host range, and genetic similarity. Viruses with three genome types are included: positive-strand RNA viruses, negative-strand RNA viruses, and double-stranded RNA viruses.

Many of the most widely known viral diseases are caused by RNA viruses in the kingdom, which includes coronaviruses, the Ebola virus, influenza viruses, the measles virus, and the rabies virus. The first virus to be discovered, tobacco mosaic virus, belongs to the kingdom. In modern history, RdRp-encoding RNA viruses have caused numerous disease outbreaks, and they infect many economically important crops. Most eukaryotic viruses, including most human, animal, and plant viruses, are RdRp-encoding RNA viruses. In contrast, there are relatively few prokaryotic viruses in the kingdom.

The first part of Orthornavirae comes from Greek ὀρθός [orthós], meaning straight, the middle part, rna, refers to RNA, and -virae is the suffix used for virus kingdoms. [1] 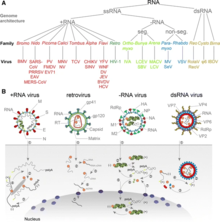 RNA viruses in Orthornavirae typically do not encode many proteins, but most positive-sense, single-stranded (+ssRNA) viruses and some double-stranded RNA (dsRNA) viruses encode a major capsid protein that has a single jelly roll fold, so named because the folded structure of the protein contains a structure that resembles a jelly roll. [2] Many also possess an envelope, a type of lipid membrane that typically surrounds the capsid. In particular, the viral envelope is near-universal among negative-sense, single-stranded (-ssRNA) viruses. [3] [4]

Viruses in Orthornavirae have three different types of genomes: dsRNA, +ssRNA, and -ssRNA. Single-stranded RNA viruses have either a positive or negative sense strand, and dsRNA viruses have both. This structure of the genome is important in terms of transcription to synthesize viral mRNA as well as replication of the genome, both of which are carried out by the viral enzyme RNA-dependent RNA polymerase (RdRp), also called RNA replicase. [1] [2]

Positive-strand RNA viruses have genomes that can function as mRNA, so transcription is not necessary. However, +ssRNA will produce dsRNA forms as part of the process of replicating their genomes. From the dsRNA, additional positive strands are synthesized, which may be used as mRNA or for genomes for progeny. Because +ssRNA viruses create intermediate dsRNA forms, they have to avoid the host's immune system in order to replicate. +ssRNA viruses accomplish this by replicating in membrane-associated vesicles that are used as replication factories. For many +ssRNA viruses, subgenomic portions of the genome will be transcribed to translate specific proteins, whereas others will transcribe a polyprotein that is cleaved to produce separate proteins. [5] [6]

Negative-strand RNA viruses have genomes that function as templates from which mRNA can be synthesized directly by RdRp. [7] Replication is the same process but executed on the positive sense antigenome, during which RdRp ignores all transcription signals so that a complete -ssRNA genome can be synthesized. [8] -ssRNA viruses vary between those that initiate transcription by the RdRp creating a cap on the 5'-end (usually pronounced "five prime end") of the genome or by snatching a cap from host mRNA and attaching it to the viral RNA. [9] For many -ssRNA viruses, at the end of transcription, RdRp stutters on a uracil in the genome, synthesizing hundreds of adenines in a row as part of creating a polyadenylated tail for the mRNA. [10] Some -ssRNA viruses are essentially ambisense, and have proteins encoded by both the positive and negative strand, so mRNA is synthesized directly from the genome and from a complementary strand. [11]

For dsRNA viruses, RdRp transcribes mRNA by using the negative strand as a template. Positive strands may also be used as templates to synthesize negative strands for the construction of genomic dsRNA. dsRNA is not a molecule produced by cells, so cellular life has evolved mechanisms to detect and inactivate viral dsRNA. To counter this, dsRNA viruses typically retain their genomes inside of viral capsid in order to evade the host's immune system. [12]

RNA viruses in Orthornavirae experience a high rate of genetic mutations because RdRp is prone to making errors in replication since it typically lacks proofreading mechanisms to repair errors. [note 1] Mutations in RNA viruses are often influenced by host factors such as dsRNA-dependent adenosine deaminases, which edit viral genomes by changing adenosines to inosines. [13] [14] Mutations in genes that are essential for replication lead to a reduced number of progeny, so viral genomes typically contain sequences that are highly conserved over time with relatively few mutations. [15]

Many RdRp-encoding RNA viruses also experience a high rate of genetic recombination, though rates of recombination vary significantly, with lower rates in -ssRNA viruses and higher rates in dsRNA and +ssRNA viruses. There are two types of recombination: copy choice recombination and reassortment. Copy choice recombination occurs when the RdRp switches templates during synthesis without releasing the prior, newly created RNA strand, which generates a genome of mixed ancestry. Reassortment, which is restricted to viruses with segmented genomes, has segments from different genomes packaged into a single virion, or virus particle, which also produces hybrid progeny. [13] [16]

The mutation rate of a virus is associated with the rate of genetic recombinations. Higher mutation rates increase both the number of advantageous and disadvantageous mutations, whereas higher rates of recombination allows for beneficial mutations to be separated from deleterious ones. Therefore, higher rates of mutations and recombinations, up to a certain point, improve viruses' ability to adapt. [13] [19] Notable examples of this include reassortments that enable cross-species transmission of influenza viruses, which have led to numerous pandemics, as well as the emergence of drug-resistance influenza strains via mutations that were reassorted. [18] 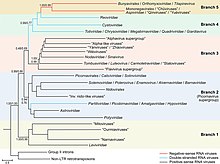 The exact origin of Orthornavirae is not well established, but the viral RdRp shows a relation to the reverse transcriptase (RT) enzymes of group II introns that encode RTs and retrotransposons, the latter of which are self-replicating DNA sequences that integrate themselves into other parts of the same DNA molecule. Within the kingdom, +ssRNA viruses are likely to be the oldest lineage, dsRNA viruses appear to have emerged on multiple occasions from +ssRNA viruses, and -ssRNA viruses in turn appear to be related to reoviruses, which are dsRNA viruses. [1] [2]

RNA viruses that encode RdRp are assigned to the kingdom Orthornavirae, which contains five phyla and several taxa that are unassigned to a phylum due to lack of information. The five phyla are separated based on the genome types, host ranges, and genetic similarity of member viruses. [1] [20]

The kingdom contains three groups in the Baltimore classification system, which groups viruses together based on their manner of mRNA synthesis, and which is often used alongside standard virus taxonomy, which is based on evolutionary history. Those three groups are Group III: dsRNA viruses, Group IV: +ssRNA viruses, and Group V: -ssRNA viruses. [1] [2]

RNA viruses are associated with a wide range of disease, including many of the most widely known viral diseases. Notable disease-causing viruses in Orthornavirae include: [20]

Animal viruses in Orthornavirae include orbiviruses, which cause various diseases in ruminants and horses, including Bluetongue virus, African horse sickness virus, Equine encephalosis virus, and epizootic hemorrhagic disease virus. [21] The vesicular stomatitis virus causes disease in cattle, horses, and pigs. [22] Bats harbor many viruses including ebolaviruses and henipaviruses, which also can cause disease in humans. [23] Similarly, arthropod viruses in the Flavivirus and Phlebovirus genera are numerous and often transmitted to humans. [24] [25] Coronaviruses and influenza viruses cause disease in various vertebrates, including bats, birds, and pigs. [26] [27]

Plant viruses in the kingdom are numerous and infect many economically important crops. Tomato spotted wilt virus is estimated to cause more than 1 billion USD in damages annually, affecting more than 800 plant species including chrysanthemum, lettuce, peanut, pepper, and tomato. Cucumber mosaic virus infects more than 1,200 plant species and likewise causes significant crop losses. Potato virus Y causes significant reductions in yield and quality for pepper, potato, tobacco, and tomato, and Plum pox virus is the most important virus among stone fruit crops. Brome mosaic virus, while not causing significant economic losses, is found throughout much of the world and primarily infects grasses, including cereals. [20] [28]

Diseases caused by RNA viruses in Orthornavirae have been known throughout much of history, but their cause was only discovered in modern times. As a whole, RNA viruses were discovered during a time period of major advancements in molecular biology, including the discovery of mRNA as the immediate carrier of genetic information for protein synthesis. [29] Tobacco mosaic virus was discovered in 1898 and was the first virus to be discovered. [30] Viruses in the kingdom that are transmitted by arthropods have been a key target in the development of vector control, which often aims to prevent viral infections. [31] In modern history, numerous disease outbreaks have been caused by RdRp-encoding RNA viruses, including outbreaks caused by coronaviruses, ebola, and influenza. [32]