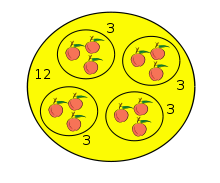 In arithmetic, a quotient (from Latin: quotiens 'how many times', pronounced /ˈkwoʊʃənt/) is a quantity produced by the division of two numbers. [1] The quotient has widespread use throughout mathematics, and is commonly referred to as the integer part of a division (in the case of Euclidean division), [2] or as a fraction or a ratio (in the case of proper division). For example, when dividing 20 (the dividend) by 3 (the divisor), the quotient is "6 with a remainder of 2" in the Euclidean division sense, and

in the proper division sense. In the second sense, a quotient is simply the ratio of a dividend to its divisor.

The quotient is most frequently encountered as two numbers, or two variables, divided by a horizontal line. The words "dividend" and "divisor" refer to each individual part, while the word "quotient" refers to the whole.

In this sense, a quotient is the integer part of the ratio of two numbers. [3]

A rational number can be defined as the quotient of two integers (as long as the denominator is non-zero).

A real number r is rational, if and only if it can be expressed as a quotient of two integers with a nonzero denominator. A real number that is not rational is irrational.

Given a real number r, r is rational if and only if there exists integers a and b such that

The existence of irrational numbers—numbers that are not a quotient of two integers—was first discovered in geometry, in such things as the ratio of the diagonal to the side in a square. [5]

Outside of arithmetic, many branches of mathematics have borrowed the word "quotient" to describe structures built by breaking larger structures into pieces. Given a set with an equivalence relation defined on it, a " quotient set" may be created which contains those equivalence classes as elements. A quotient group may be formed by breaking a group into a number of similar cosets, while a quotient space may be formed in a similar process by breaking a vector space into a number of similar linear subspaces.