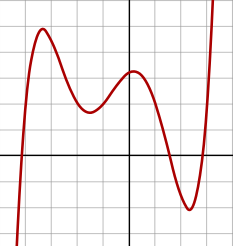 Graph of a polynomial of degree 5, with 3 real zeros (roots) and 4 critical points.

In algebra, a quintic function is a function of the form

where a, b, c, d, e and f are members of a field, typically the rational numbers, the real numbers or the complex numbers, and a is nonzero. In other words, a quintic function is defined by a polynomial of degree five.

Setting g(x) = 0 and assuming a ≠ 0 produces a quintic equation of the form:

Solving quintic equations in terms of radicals was a major problem in algebra from the 16th century, when cubic and quartic equations were solved, until the first half of the 19th century, when the impossibility of such a general solution was proved with the Abel–Ruffini theorem.

Finding roots of a quintic equation

Finding the roots of a given polynomial has been a prominent mathematical problem.

Solving linear, quadratic, cubic and quartic equations by factorization into radicals can always be done, no matter whether the roots are rational or irrational, real or complex; there are formulae that yield the required solutions. However, there is no algebraic expression (that is, in terms of radicals) for the solutions of general quintic equations over the rationals; this statement is known as the Abel–Ruffini theorem, first asserted in 1799 and completely proved in 1824. This result also holds for equations of higher degrees. An example of a quintic whose roots cannot be expressed in terms of radicals is x5 − x + 1 = 0. This quintic is in Bring–Jerrard normal form.

Some quintics may be solved in terms of radicals. However, the solution is generally too complex to be used in practice. Instead, numerical approximations are calculated using a root-finding algorithm for polynomials.

To characterize solvable quintics, and more generally solvable polynomials of higher degree, Évariste Galois developed techniques which gave rise to group theory and Galois theory. Applying these techniques, Arthur Cayley found a general criterion for determining whether any given quintic is solvable. [2] This criterion is the following. [3]

the Tschirnhaus transformation x = y − b/5a, which depresses the quintic (that is, removes the term of degree four), gives the equation

Both quintics are solvable by radicals if and only if either they are factorisable in equations of lower degrees with rational coefficients or the polynomial P2 − 1024zΔ, named Cayley's resolvent, has a rational root in z, where

Cayley's result allows us to test if a quintic is solvable. If it is the case, finding its roots is a more difficult problem, which consists of expressing the roots in terms of radicals involving the coefficients of the quintic and the rational root of Cayley's resolvent.

In 1888, George Paxton Young [4] described how to solve a solvable quintic equation, without providing an explicit formula; Daniel Lazard wrote out a three-page formula (Lazard (2004)).

There are several parametric representations of solvable quintics of the form x5 + ax + b = 0, called the Bring–Jerrard form.

During the second half of the 19th century, John Stuart Glashan, George Paxton Young, and Carl Runge gave such a parameterization: an irreducible quintic with rational coefficients in Bring–Jerrard form is solvable if and only if either a = 0 or it may be written

where μ and ν are rational.

In 1994, Blair Spearman and Kenneth S. Williams gave an alternative,

where a = 5(4ν + 3)/ν2 + 1. Using the negative case of the square root yields, after scaling variables, the first parametrization while the positive case gives the second.

The substitution c = −m/l5, e = 1/l in the Spearman-Williams parameterization allows one to not exclude the special case a = 0, giving the following result:

If a and b are rational numbers, the equation x5 + ax + b = 0 is solvable by radicals if either its left-hand side is a product of polynomials of degree less than 5 with rational coefficients or there exist two rational numbers l and m such that

Roots of a solvable quintic

If the quintic is solvable, one of the solutions may be represented by an algebraic expression involving a fifth root and at most two square roots, generally nested. The other solutions may then be obtained either by changing the fifth root or by multiplying all the occurrences of the fifth root by the same power of a primitive 5th root of unity

All four primitive fifth roots of unity may be obtained by changing the signs of the square roots appropriately, namely:

It follows that one may need four different square roots for writing all the roots of a solvable quintic. Even for the first root that involves at most two square roots, the expression of the solutions in terms of radicals is usually highly complicated. However, when no square root is needed, the form of the first solution may be rather simple, as for the equation x5 − 5x4 + 30x3 − 50x2 + 55x − 21 = 0, for which the only real solution is

where the yi are the four roots of the quartic equation

More generally, if an equation P(x) = 0 of prime degree p with rational coefficients is solvable in radicals, then one can define an auxiliary equation Q(y) = 0 of degree p – 1, also with rational coefficients, such that each root of P is the sum of p-th roots of the roots of Q. These p-th roots were introduced by Joseph-Louis Lagrange, and their products by p are commonly called Lagrange resolvents. The computation of Q and its roots can be used to solve P(x) = 0. However these p-th roots may not be computed independently (this would provide pp–1 roots instead of p). Thus a correct solution needs to express all these p-roots in term of one of them. Galois theory shows that this is always theoretically possible, even if the resulting formula may be too large to be of any use.

It is possible that some of the roots of Q are rational (as in the first example of this section) or some are zero. In these cases, the formula for the roots is much simpler, as for the solvable de Moivre quintic

where the auxiliary equation has two zero roots and reduces, by factoring them out, to the quadratic equation

where yi is any root of the auxiliary quadratic equation and ω is any of the four primitive 5th roots of unity. This can be easily generalized to construct a solvable septic and other odd degrees, not necessarily prime.

There are infinitely many solvable quintics in Bring-Jerrard form which have been parameterized in a preceding section.

Up to the scaling of the variable, there are exactly five solvable quintics of the shape

Paxton Young (1888) gave a number of examples of solvable quintics:

An infinite sequence of solvable quintics may be constructed, whose roots are sums of n-th roots of unity, with n = 10k + 1 being a prime number:

There are also two parameterized families of solvable quintics: The Kondo–Brumer quintic,

and the family depending on the parameters

Analogously to cubic equations, there are solvable quintics which have five real roots all of whose solutions in radicals involve roots of complex numbers. This is casus irreducibilis for the quintic, which is discussed in Dummit. [6]:p.17 Indeed, if an irreducible quintic has all roots real, no root can be expressed purely in terms of real radicals (as is true for all polynomial degrees that are not powers of 2).

About 1835, Jerrard demonstrated that quintics can be solved by using ultraradicals (also known as Bring radicals), the unique real root of t5 + t − a = 0 for real numbers a. In 1858 Charles Hermite showed that the Bring radical could be characterized in terms of the Jacobi theta functions and their associated elliptic modular functions, using an approach similar to the more familiar approach of solving cubic equations by means of trigonometric functions. At around the same time, Leopold Kronecker, using group theory, developed a simpler way of deriving Hermite's result, as had Francesco Brioschi. Later, Felix Klein came up with a method that relates the symmetries of the icosahedron, Galois theory, and the elliptic modular functions that are featured in Hermite's solution, giving an explanation for why they should appear at all, and developed his own solution in terms of generalized hypergeometric functions. [7] Similar phenomena occur in degree 7 ( septic equations) and 11, as studied by Klein and discussed in Icosahedral symmetry § Related geometries.

A Tschirnhaus transformation, which may be computed by solving a quartic equation, reduces the general quintic equation of the form

The roots of this equation cannot be expressed by radicals. However, in 1858, Charles Hermite published the first known solution of this equation in terms of elliptic functions. [8] At around the same time Francesco Brioschi [9] and Leopold Kronecker [10] came upon equivalent solutions.

See Bring radical for details on these solutions and some related ones.

Solving for the locations of the Lagrangian points of an astronomical orbit in which the masses of both objects are non-negligible involves solving a quintic.

More precisely, the locations of L2 and L1 are the solutions to the following equations, where the gravitational forces of two masses on a third (for example, Sun and Earth on satellites such as Gaia at L2 and SOHO at L1) provide the satellite's centripetal force necessary to be in a synchronous orbit with Earth around the Sun:

The ± sign corresponds to L2 and L1, respectively; G is the gravitational constant, ω the angular velocity, r the distance of the satellite to Earth, R the distance Sun to Earth (that is, the semi-major axis of Earth's orbit), and m, ME, and MS are the respective masses of satellite, Earth, and Sun.