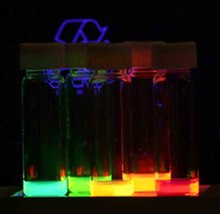 Quantum secure communication is a method that is expected to be 'quantum safe' in the advent of quantum computing systems that could break current cryptography systems using methods such as Shor's algorithm. These methods include quantum key distribution (QKD), a method of transmitting information using entangled light in a way that makes any interception of the transmission obvious to the user. Another method is the quantum random number generator, which is capable of producing truly random numbers unlike non-quantum algorithms that merely imitate randomness. [3]

Quantum computers are expected to have a number of important uses in computing fields such as optimization and machine learning. They are perhaps best known for their expected ability to carry out Shor's algorithm, which can be used to factorize large numbers and is an important process in the securing of data transmissions.

Quantum sensors are expected to have a number of applications in a wide variety of fields including positioning systems, communication technology, electric and magnetic field sensors, gravimetry [4] as well as geophysical areas of research such as civil engineering [5] and seismology.

Many devices already available are fundamentally reliant on the effects of quantum mechanics. These include laser systems, transistors and semiconductor devices, as well as other devices such as MRI imagers. The UK Defence Science and Technology Laboratory (DSTL) grouped these devices as 'quantum 1.0' to differentiate them from what it dubbed 'quantum 2.0', which it defined as a class of devices that actively create, manipulate, and read out quantum states of matter using the effects of superposition and entanglement. [10]

From 2010 onwards, multiple governments have established programmes to explore quantum technologies, [11] such as the UK National Quantum Technologies Programme, [12] which created four quantum 'hubs', the Centre for Quantum Technologies in Singapore, and QuTech, a Dutch center to develop a topological quantum computer. [13] In 2016, the European Union introduced the Quantum Technology Flagship, [14] [15] a €1 Billion, 10-year-long megaproject, similar in size to earlier European Future and Emerging Technologies Flagship projects. [16] [17] In December 2018, the United States passed the National Quantum Initiative Act, which provides a US$1 billion annual budget for quantum research. [18] China is building the world's largest quantum research facility with a planned investment of 76 billion Yuan (approx. €10 Billion). [19] [20] Indian government has also invested 8000 Rupees (approx. US$1.02 Billion) over 5-years to boost quantum technologies under its National Quantum Mission. [21]