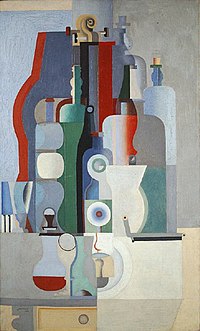 Purism, referring to the arts, was a movement that took place between 1918 and 1925 that influenced French painting and architecture. Purism was led by Amédée Ozenfant and Charles Edouard Jeanneret (Le Corbusier). Ozenfant and Le Corbusier formulated an aesthetic doctrine born from a criticism of Cubism and called it Purism: where objects are represented as elementary forms devoid of detail. The main concepts were presented in their short essay Après le Cubisme (After Cubism) published in 1918. [1] [2] 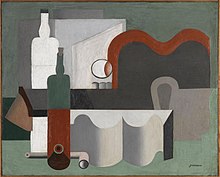 Le Corbusier and Ozenfant were the creators of Purism. Fernand Léger was a principle associate. [2] Purism was an attempt to restore regularity in a war-torn France post World War I. [1] Unlike what they saw as 'decorative' fragmentation of objects in Cubism, Purism proposed a style of painting where elements were represented as robust simplified forms with minimal detail, while embracing technology and the machine. [2]

Purism culminated in Le Corbusier’s Pavillon de l'Esprit Nouveau (Pavilion of the New Spirit), constructed for the International Exhibition of Modern Decorative and Industrial Arts in 1925. This included the work of Cubists Juan Gris and Jacques Lipchitz. Following this exhibition the relationship between Le Corbusier and Ozenfant declined. [2] 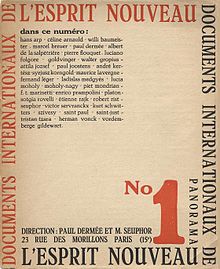 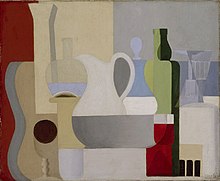 Ozenfant and Le Corbusier contributed extensively to an art magazine called L'Esprit Nouveau from 1920 to 1925 serving as a platform for propaganda towards their Purist movement. [1] [3]

The Purist Manifesto lays out the rules Ozenfant and Le Corbusier created to govern the Purist movement. [1]