From Wikipedia, the free encyclopedia
Object thrown by an exertion of an unbalanced force in an inertial frame of reference

A projectile being fired from an artillery piece

A projectile is an object that is propelled by the application of an external force and then moves freely under the influence of gravity and air resistance. [1] [2] Although any objects in motion through space are projectiles, they are commonly found in warfare and sports (for example, a thrown baseball, kicked football, fired bullet, shot arrow, stone released from catapult). [3] [4]

In ballistics mathematical equations of motion are used to analyze projectile trajectories through launch, flight, and impact. 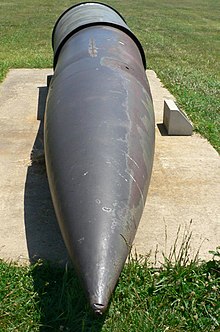 Projectile and cartridge case for the huge World War II Schwerer Gustav artillery piece. Most projectile weapons use the compression or expansion of gases as their motive force.

Blowguns and pneumatic rifles use compressed gases, while most other guns and cannons utilize expanding gases liberated by sudden chemical reactions by propellants like smokeless powder. Light-gas guns use a combination of these mechanisms.

Railguns utilize electromagnetic fields to provide a constant acceleration along the entire length of the device, greatly increasing the muzzle velocity.

Some projectiles provide propulsion during flight by means of a rocket engine or jet engine. In military terminology, a rocket is unguided, while a missile is guided. Note the two meanings of "rocket" (weapon and engine): an ICBM is a guided missile with a rocket engine.

Many projectiles, e.g. shells, may carry an explosive charge or another chemical or biological substance. Aside from explosive payload, a projectile can be designed to cause special damage, e.g. fire (see also early thermal weapons), or poisoning (see also arrow poison).

This section is an excerpt from Kinetic energy weapon. 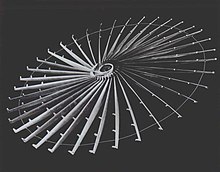 The Homing Overlay Experiment used a metal fan that was rolled up during launch and expanded during flight. The metal has five times as much destructive power as an explosive warhead of the same weight.

The term Hit-to-kill, or kinetic kill, is also used in the military aerospace field to describe kinetic energy weapons. It has been used primarily in the anti-ballistic missiles (ABM) and anti-satellite weapons (ASAT) area, but some modern anti-aircraft missiles are also hit-to-kill. Hit-to-kill systems are part of the wider class of kinetic projectiles, a class that has widespread use in the anti-tank field.

Typical kinetic energy weapons are blunt projectiles such as rocks and round shots, pointed ones such as arrows, and somewhat pointed ones such as bullets. Among projectiles that do not contain explosives are those launched from railguns, coilguns, and mass drivers, as well as kinetic energy penetrators. All of these weapons work by attaining a high muzzle velocity, or initial velocity, generally up to hypervelocity, and collide with their targets, converting the kinetic energy associated with the relative velocity between the two objects into destructive shock waves and heat. Other types of kinetic weapons are accelerated over time by a rocket engine, or by gravity. In either case, it is this kinetic energy that destroys its target.

Some projectiles stay connected by a cable to the launch equipment after launching it:

while the horizontal component of the velocity is

. There are various calculations for projectiles at a specific angle

1. Time to reach maximum height. It is symbolized as (

), which is the time taken for the projectile to reach the maximum height from the plane of projection. Mathematically, it is given as

= angle made by the projectile with the horizontal axis.

): this is the total time taken for the projectile to fall back to the same plane from which it was projected. Mathematically it is given as

): The Range of a projectile is the horizontal distance covered (on the x-axis) by the projectile. Mathematically,

. The Range is maximum when angle