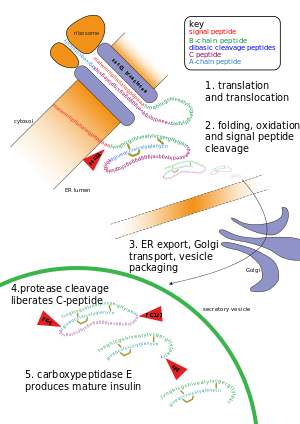 Post-translational modification of insulin. At the top, the ribosome translates a mRNA sequence into a protein, insulin, and passes the protein through the endoplasmic reticulum, where it is cut, folded, and held in shape by disulfide (-S-S-) bonds. Then the protein passes through the golgi apparatus, where it is packaged into a vesicle. In the vesicle, more parts are cut off, and it turns into mature insulin.

Post-translational modification (PTM) refers to the covalent and generally enzymatic modification of proteins following protein biosynthesis. Proteins are synthesized by ribosomes translating mRNA into polypeptide chains, which may then undergo PTM to form the mature protein product. PTMs are important components in cell signaling, as for example when prohormones are converted to hormones.

Post-translational modifications can occur on the amino acid side chains or at the protein's C- or N- termini. [1] They can extend the chemical repertoire of the 20 standard amino acids by modifying an existing functional group or introducing a new one such as phosphate. Phosphorylation is a very common mechanism for regulating the activity of enzymes and is the most common post-translational modification. [2] Many eukaryotic and prokaryotic proteins also have carbohydrate molecules attached to them in a process called glycosylation, which can promote protein folding and improve stability as well as serving regulatory functions. Attachment of lipid molecules, known as lipidation, often targets a protein or part of a protein attached to the cell membrane.

Other forms of post-translational modification consist of cleaving peptide bonds, as in processing a propeptide to a mature form or removing the initiator methionine residue. The formation of disulfide bonds from cysteine residues may also be referred to as a post-translational modification. [3] For instance, the peptide hormone insulin is cut twice after disulfide bonds are formed, and a propeptide is removed from the middle of the chain; the resulting protein consists of two polypeptide chains connected by disulfide bonds.

Some types of post-translational modification are consequences of oxidative stress. Carbonylation is one example that targets the modified protein for degradation and can result in the formation of protein aggregates. [4] [5] Specific amino acid modifications can be used as biomarkers indicating oxidative damage. [6]

Sites that often undergo post-translational modification are those that have a functional group that can serve as a nucleophile in the reaction: the hydroxyl groups of serine, threonine, and tyrosine; the amine forms of lysine, arginine, and histidine; the thiolate anion of cysteine; the carboxylates of aspartate and glutamate; and the N- and C-termini. In addition, although the amide of asparagine is a weak nucleophile, it can serve as an attachment point for glycans. Rarer modifications can occur at oxidized methionines and at some methylenes in side chains. [7]

Post-translational modification of proteins can be experimentally detected by a variety of techniques, including mass spectrometry, Eastern blotting, and Western blotting. Additional methods are provided in the external links sections.

Addition by an enzyme in vivo

Other proteins or peptides

Some common post-translational modifications to specific amino-acid residues are shown below. Modifications occur on the side-chain unless indicated otherwise. 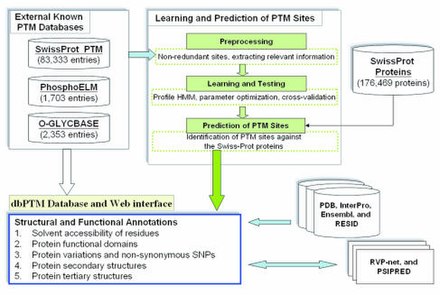 Flowchart of the process and the data sources to predict PTMs. [24]

Protein sequences contain sequence motifs that are recognized by modifying enzymes, and which can be documented or predicted in PTM databases. With the large number of different modifications being discovered, there is a need to document this sort of information in databases. PTM information can be collected through experimental means or predicted from high-quality, manually curated data. Numerous databases have been created, often with a focus on certain taxonomic groups (e.g. human proteins) or other features.

List of software for visualization of proteins and their PTMs