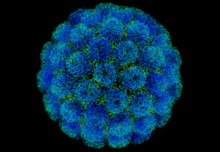 Viruses are small infectious agents that can replicate only inside the living cells of an organism. Viruses infect all forms of life, including animals, plants, fungi, bacteria and archaea. They are found in almost every ecosystem on Earth and are the most abundant type of biological entity, with millions of different types, although only about 6,000 viruses have been described in detail. Some viruses cause disease in humans, and others are responsible for economically important diseases of livestock and crops.

Virus particles (known as virions) consist of genetic material, which can be either DNA or RNA, wrapped in a protein coat called the capsid; some viruses also have an outer lipid envelope. The capsid can take simple helical or icosahedral forms, or more complex structures. The average virus is about 1/100 the size of the average bacterium, and most are too small to be seen directly with an optical microscope.

The origins of viruses are unclear: some may have evolved from plasmids, others from bacteria. Viruses are sometimes considered to be a life form, because they carry genetic material, reproduce and evolve through natural selection. However they lack key characteristics (such as cell structure) that are generally considered necessary to count as life. Because they possess some but not all such qualities, viruses have been described as "organisms at the edge of life".

Influenza, or flu, is an infectious disease caused by some orthomyxoviruses, that affects birds and some mammals including humans, horses and pigs. Influenza is predominantly transmitted through the air by coughs or sneezes, creating aerosols containing the virus. It can also be transmitted by contact with bird droppings or nasal secretions, or by touching contaminated surfaces. As the virus can be inactivated by soap, frequent hand washing reduces the risk of infection. Around a third of cases show no symptoms. The most common symptoms include fever, runny nose, sore throat, muscle pains, headache, cough and fatigue. Influenza is occasionally associated with nausea and vomiting, particularly in children. Pneumonia is a rare complication which can be life-threatening.

Influenza spreads around the world in seasonal epidemics, resulting in about 3–5 million cases of severe illness annually, and about 250,000–500,000 deaths, mainly in the young, the old and those with other health problems. Annual influenza vaccinations are recommended for those at high risk. Sporadic influenza pandemics have been recorded since at least the 16th century. The Spanish flu pandemic of 1918–20 is estimated to have killed 50–100 million people.

26 February: In the ongoing pandemic of severe acute respiratory syndrome coronavirus 2 (SARS-CoV-2), more than 110 million confirmed cases, including 2.5 million deaths, have been documented globally since the outbreak began in December 2019. WHO

18 February: Seven asymptomatic cases of avian influenza A subtype H5N8, the first documented H5N8 cases in humans, are reported in Astrakhan Oblast, Russia, after more than 100,0000 hens died on a poultry farm in December. WHO

7 February: A case of Ebola virus disease is detected in North Kivu Province of the Democratic Republic of the Congo. WHO

4 February: An outbreak of Rift Valley fever is ongoing in Kenya, with 32 human cases, including 11 deaths, since the outbreak started in November. WHO

21 November: The US Food and Drug Administration (FDA) gives emergency-use authorisation to casirivimab/imdevimab, a combination monoclonal antibody (mAb) therapy for non-hospitalised people twelve years and over with mild-to-moderate COVID-19, after granting emergency-use authorisation to the single mAb bamlanivimab earlier in the month. FDA 1, 2

18 November: The outbreak of Ebola virus disease in Équateur Province, Democratic Republic of the Congo, which started in June, has been declared over; a total of 130 cases were recorded, with 55 deaths. UN

A global drive to eradicate poliovirus started in 1988, when there were an estimated 350,000 cases of wild poliovirus infection globally. Two diseases, both caused by viruses, have been eradicated, smallpox in 1980 and rinderpest in 2011. Poliovirus only infects humans. It persists in the environment for a few weeks at room temperature and a few months at 0–8 °C. The oral polio vaccine is inexpensive, highly effective and is predicted to generate lifelong immunity. Reversion of live vaccine strains to virulence has resulted in occasional cases of vaccine-associated polio paralysis.

Two of the three strains of wild-type poliovirus have been eradicated. Annual reported cases of wild poliovirus infection fell to a low of 22 in 2017, but had risen to 176 in 2019. As of 2020, the wild virus remains endemic only in Afghanistan and Pakistan, but vaccine-derived poliovirus is circulating in several countries. A lack of basic health infrastructure and civil war remain significant obstacles to eradication. Some local communities have opposed immunisation campaigns, and vaccination workers have been murdered in Pakistan and Nigeria.

The 2001 foot-and-mouth outbreak included 2,000 cases of the disease in cattle and sheep across the UK. The source was a Northumberland farm where pigs had been fed infected meat that had not been adequately sterilised. The initial cases were reported in February. The disease was concentrated in western and northern England, southern Scotland and Wales, with Cumbria being the worst-affected area. A small outbreak occurred in the Netherlands, and there were a few cases elsewhere in Europe.

The UK outbreak was controlled by the beginning of October. Control measures included stopping livestock movement and slaughtering over 6 million cows and sheep. Public access to farmland and moorland was also restricted (pictured), greatly reducing tourism in affected areas, particularly in the Lake District. Vaccination was used in the Netherlands, but not in the UK due to concerns that vaccinated livestock could not be exported. The outbreak cost an estimated £8 billion in the UK.

• Race Against Time: Searching for Hope in AIDS-Ravaged Africa

Noroviruses are a genus of non- enveloped, single-stranded RNA viruses in the family Caliciviridae. The positive-sense RNA genome is approximately 7500 nucleotides long. Known noroviruses fall into five different genogroups (GI–GV); three groups infect humans, the other two mice, and cattle and other bovines. All are considered strains of a single species, Norwalk virus.

Noroviruses are extremely contagious, with fewer than 20 virus particles being infectious. They are transmitted directly from person to person and indirectly via contaminated water and food. After infection, the virus replicates in the small intestine, causing acute gastroenteritis, which develops 12–48 hours after exposure and lasts for 24–72 hours. The characteristic symptoms include nausea, forceful vomiting, watery diarrhoea and abdominal pain. Infection is usually self-limiting and rarely severe. Noroviruses cause 18% of acute gastroenteritis episodes in humans, with around 685 million cases and 200,000 deaths every year, mainly in very young, elderly or immunosuppressed people. No vaccine is available. Hand washing with soap and water is effective in reducing transmission.

Sir Frank Macfarlane Burnet (3 September 1899 – 31 August 1985) was an Australian virologist, microbiologist and immunologist. His early virological studies were on bacteriophages, including the pioneering observation that bacteriophages could exist as a stable non-infectious form that multiplies with the bacterial host, later termed the lysogenic cycle.

With the outbreak of World War II, Burnet's focus moved to influenza. Although his efforts to develop a live vaccine proved unsuccessful, he developed assays for the isolation, culture and detection of influenza virus, including haemagglutination assays. Modern methods for producing influenza vaccines are still based on his work improving virus-growing processes in hen's eggs. He also researched influenza virus genetics, examining the genetic control of virulence and demonstrating, several years before influenza virus was shown to have a segmented genome, that the virus recombined at high frequency.

10 July 1797: Jenner submitted paper on Phipps and other cases to the Royal Society; it was read to the society but not published

19 July 2013: Pandoravirus described, with a genome twice as large as Megavirus

Several human papillomavirus (HPV) vaccines, including Cervarix and Gardasil, have been approved to protect against infections with particular types of HPV, associated with cervical and other cancers. All vaccines protect against the high-risk HPV types 16 and 18. Gardasil is a quadrivalent vaccine that additionally protects against low-risk HPV-6 and -11, which are associated with most cases of genital warts. A second-generation nine-valent Gardasil vaccine protects against five additional high-risk HPV types. It is estimated that the vaccines may prevent 70% of cervical cancer, 80% of anal cancer, 60% of vaginal cancer, 40% of vulvar cancer and possibly some oropharyngeal cancers. Protection lasts for at least 8–9 years. Some advocate giving Gardasil to men and boys with the primary aim of protecting their female sexual partners; others consider vaccinating only women and girls to be more cost effective. The licensed vaccines are subunit vaccines, containing only the L1 capsid protein of the virus, which self-assembles into virus-like particles. They are not effective in people already infected with HPV. Research is ongoing into therapeutic HPV vaccines including the viral oncoproteins, E6 and E7, but none has yet been licensed.